Gallery Aferro, the art gallery located downtown at 73 Market Street, is gearing up to reach a lot deeper into Newark with its latest project. I visited gallery co-director Evonne Davis inside the home of that project — a van that has been outfitted to function as a mobile portrait studio — yesterday outside One Newark Center at McCarter Highway and Mulberry Streets. The Gallery Aferro team was preparing to debut the portrait studio in time for the official kickoff toast for Newark Celebration 350, which would be held 22 floors up at the Newark Club just two hours later. Evonne talked to me about plans to use the mobile studio to capture photographs of Newarkers all around the city throughout the spring and summer.

Andaiye Taylor: So where are we?

Evonne Davis: You are inside of Gallery Aferro’s mobile portrait studio!

Andaiye: And what’s the project all about?

Evonne: Aferro always had a mobile attitude. We really want to do things that are not inside a whitespace gallery.

We’re going to do [Newark] Celebration 350 portraits in here. Instead of having people come to us, were going to go to the neighborhoods. We’ll let them know about our downtown location in the process, but I’m interested in capturing people in places like the laundromat on a Sunday morning. We want to get a real interaction with everyday citizens of Newark doing everyday things.

There are a lot of other portrait projects and photographers that have inspired us, like Akintola Hanif, Tamara Fleming, and Colleen Gutwein, so we’re hoping to link to things they’re working on as well. In October, we’ll present “three hundred fifty portraits of Newark” during Open Doors [the annual citywide art festival].

Andaiye: You probably know that there was a panel discussion at Aljira yesterday about the new Express Newark space [soon to launch in the redeveloped Hahne’s building]. There was a conversation about how galleries interface with the broader community. How does the portrait studio address that?

Evonne: Gallery Aferro was started by three kids from art school that felt marginalized by the greater art community. I come from incredibly creative, working class people who wouldn’t necessarily go to an art gallery because they didn’t feel like it belonged to them. It’s one thing to have people feel welcome at an art gallery, but I think they need to feel like an important part of what’s happening there.

And we’re so busy with the gallery and programs that we don’t always get to go out and see all of Newark. So this is also that opportunity to get to know people in their own element.

Photography is about looking at things and looking at people. I’m not talking about a gaze — I mean using it a way to be known and have your story known. Newark is its people. The citizens of a city are the city. That’s what we want to show with the mobile studio.

Andaiye: Have you set a schedule yet? Do you know what the cadence of your outings is going to be?

Evonne: We have a couple events confirmed, and we’re working with our board members – real Newark-centric folks – to find more community partners. We’re starting with events because it’s a good way to access a lot of people, but we’re also thinking about other ways to find people, like talking to Teixeira [bakery] about parking out in their lot and taking portraits of people who work there. We’d love to get to Vailsburg, where there’s a beautiful mural on a wall next to the park. I’d love to do something in Weequahic Park.

You’re sitting in just three weeks of work. There was a lot of planning among us before that, but we only confirmed that we were definitely doing this a few weeks ago. So we didn’t want to approach people and get them excited, and then come back and say it wasn’t going to happen. 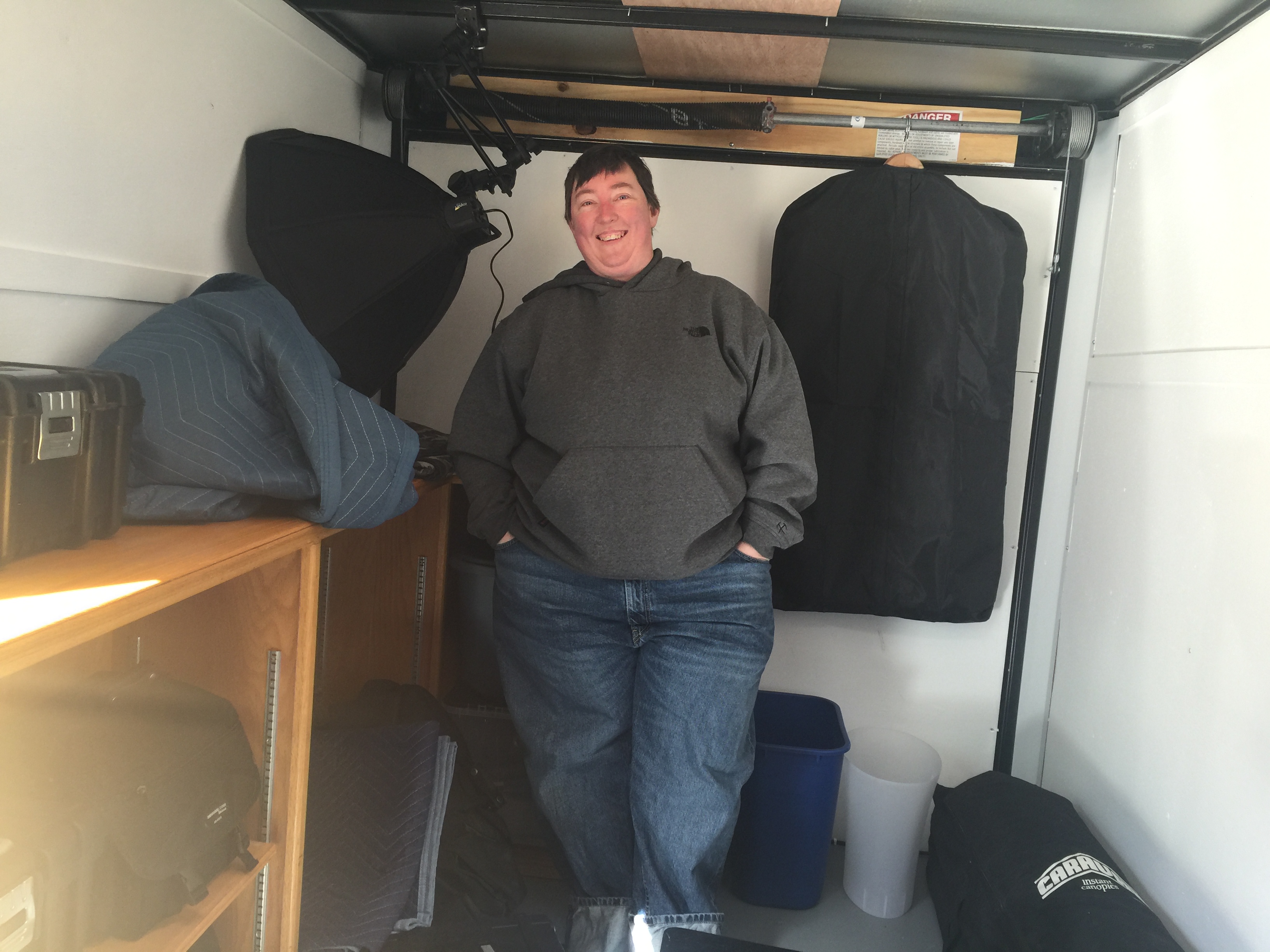 Andaiye: Can people raise their  hands and say, “I want to participate?”

Evonne: We made a flyer that we’ll distribute. We have to think about budget and timing, so we’ll make the arrangement if it’s something we’re able to do. In September, we’ll have to go into production mode to get ready for the exhibition.

Someone presented the idea of putting the three hundred fifty photos in this van and making it a mobile gallery. That could be interesting.

Andaiye: You mentioned other photographers who inspired the project. Where did you get the inspiration for the mobile aspect?

Evonne: I’ve always done things mobile. With Aferro, we thought we were going to be around for one year, but it’s been ten. So I’ve always thought about movement. As a curator, I’m not interested in traditional spaces. I’ve done shows in a wedding tent and in the back of a car. I think nontraditional spaces are more democratic.