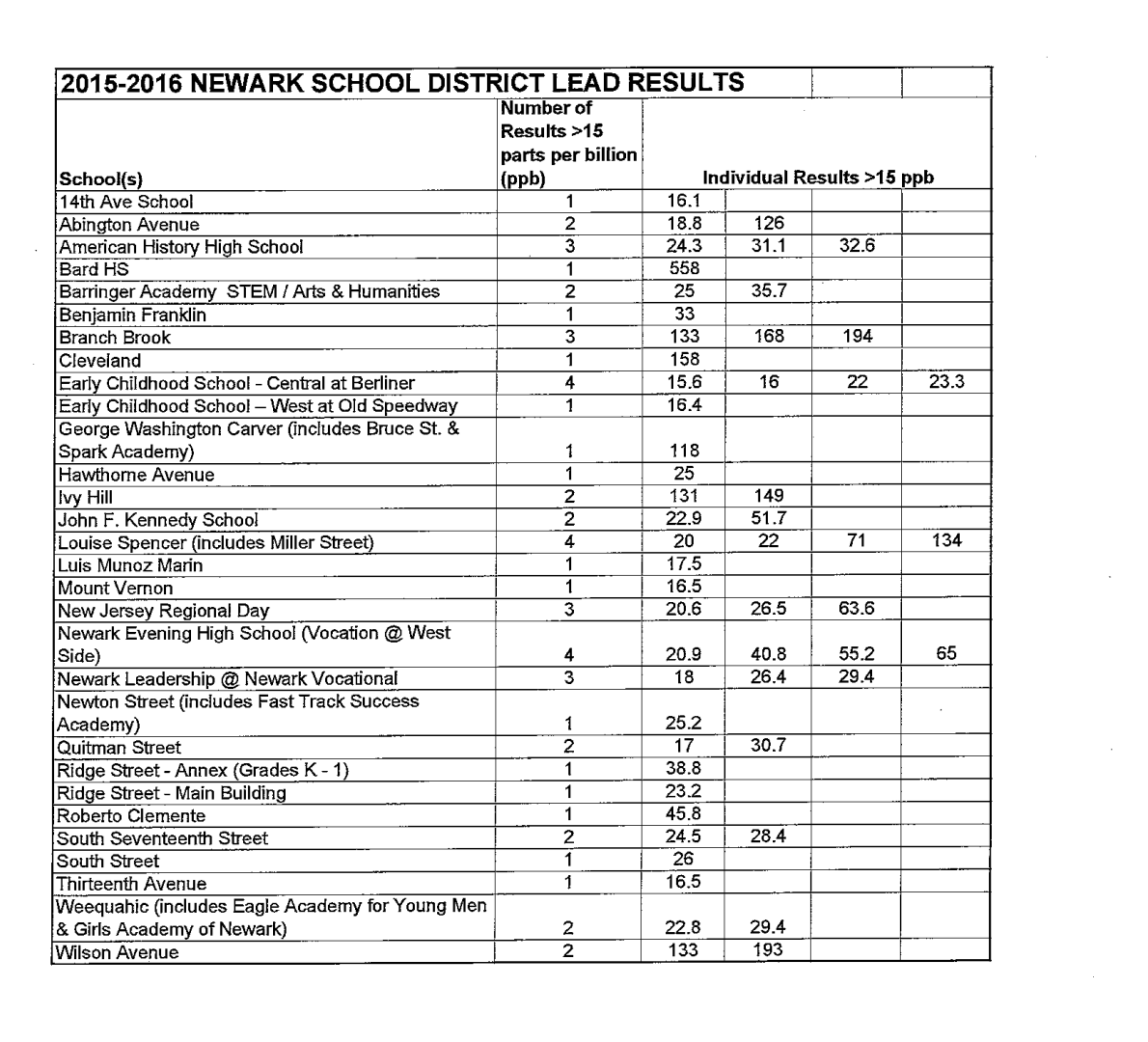 According to a joint press release issued by the New Jersey Department of Environmental Protection (DEP) and the Newark Public Schools (NPS) system, the DEP has advised NPS to temporarily utilize alternate water sources in 30 district school buildings after recent testing found elevated levels of lead at various water taps.

The Newark Public Schools system has identified and delivered alternate supplies of water for drinking and food preparation as classes continue, according to the joint statement.

The DEP and the State Department of Health are working in partnership with the district in its efforts to resolve the issue. This includes a plan for immediate, coordinated sampling of all points of entry and taps for all public schools in the district, including charters.

The Newark Public Schools systems has temporarily shut off all drinking water fountains at the schools where elevated levels of lead were recorded. This will remain the case until further tests can be conducted. It is also posting notices in restroom facilities to not drink water from the faucets. Replacement drinking water, from water coolers and bottled water, is available at all impacted schools.

On Monday, March 7, DEP was notified by Newark Public Schools of the results of recent annual testing. A total of 30 school buildings recorded levels ranging from non-detect to above EPA’s action level for lead, which is 15 parts per billion. The action level represents the threshold requiring additional testing, monitoring and remediation.

DEP has requested past test results from previous years from the school district to be able to do a complete analysis of the full data set. No building had more than four samples above the action level.

DEP has confirmed that lead has not been found within the Newark Water Department’s source water. In the vast majority of cases where lead is found in drinking water, it enters through the water delivery system itself when it leaches from either lead pipes, household fixtures containing lead, or lead solder.

Children can be given a free blood test to measure the level of lead in their blood. If parents are concerned, they can have their children tested for lead at the Newark Health Department.

A New Jersey Department of Health fact sheet on lead in drinking water is available at http://www.nj.gov/health/ceohs/documents/dw_lead_factsheet.pdf.

For more information on lead in water, visit: http://www.nj.gov/dep/watersupply/pdf/lead-water-faq.pdf.

The results of the Newark schools lead testing can be found at: www.nj.gov/dep/watersupply/pdf/newark-schools-lead-results-2015-16.pd

New History Society will present a talk about the Weequahic section’s...
Scroll to top