A newly announced city initiative will create the relationships and systems necessary to get 2,020 Newark residents employed with the city’s anchor institutions in the next three years, Mayor Ras Baraka announced today.

It’s called Newark2020, and it’s part of a broader Hire. Buy. Live. Newark initiative that also entails two related goals: convincing more people who currently work in Newark to move here, and increasing procurement opportunities with the city’s anchor institutions for Newark-based small businesses. Newark’s anchors enjoy hundreds of millions of dollars’ worth of purchasing power, and even a relatively small increase in the percentage that goes to Newark businesses can represent a significant increase in the amount of money that circulates locally.

New Jersey Institute for Social Justice (NJISJ) and Newark Alliance will coordinate and manage the Newark2020 initiative overall, and a number of corporate and non-profit partners have committed to facilitating all three objectives of Hire. Buy. Live. Newark. Details about the program’s rollout are still forthcoming.

What this initiative solves for

“It’s not normal to expect prosperity for a city with high unemployment” among its residents said Baraka during a packed press conference earlier today to announce the initiative, underscoring the necessity of bringing focused attention, well-defined intention, and high-impact partnerships to bear on addressing the systemic issues that beget widespread unemployment.

“We need to be just as angry at poverty as we are at gun violence.” 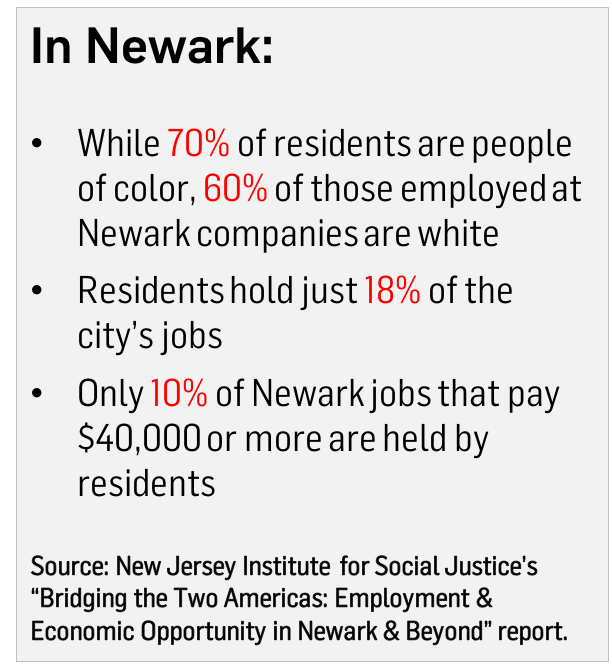 Currently, the relationship between Newark residents and job opportunities in town is marked by disparity and compounded by deep racial stratification. According to “Bridging the Two Americas: Employment & Economic Opportunity in Newark & Beyond,” a report released by NJISJ in April of this year, a third of Newark’s black residents live in poverty. Despite people of color comprising more than 70 percent of city residents, 60 percent of those employed at Newark companies are white.

Much of this is due to the lack of access to “career pathways” to middle-skill jobs, according to the NJISJ report.

In a nutshell, the city is teeming with people, at all levels of skill and educational attainment, who want jobs. A willingness to work, and even a skillset, aren’t enough to match prospective employees with opportunities. This is why the program will focus on systems in addition to its numerical goal.

To turn this problem around, said Newark Alliance CEO Kimberly McClain, the city needs to focus not just on rote job placement, but on creating smart “systems” to connect Newarkers with job opportunities in town over the next three years. This approach makes it more likely that the employment gains can be sustainable, and even be reproduced on their own. 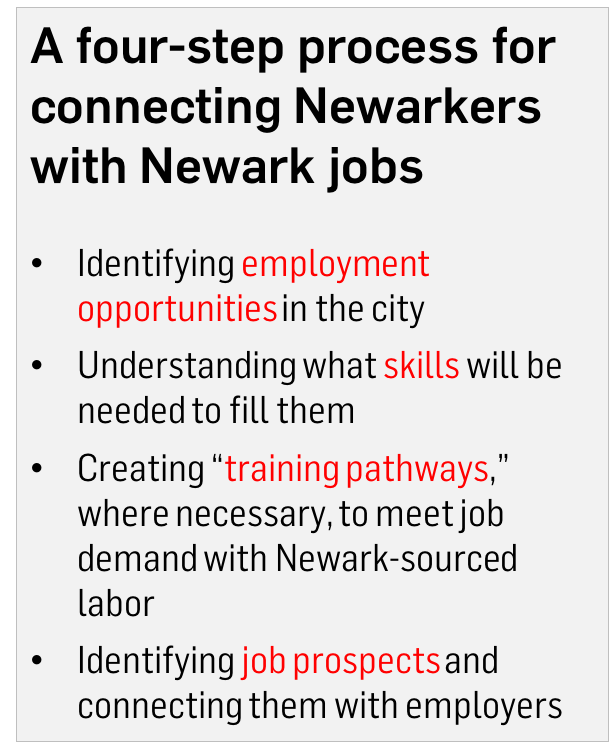 This response to the challenge of unemployment and underemployment, said NJISJ CEO Ryan Haygood, will entail a four-step process: identifying employment opportunities in the city; understanding what skills will be needed to fill them; creating “training pathways,” where necessary, to meet that demand with Newark-sourced labor; and then identifying job prospects and connecting them with employers. This process, Haygood said, was created based on a review of best practices nationwide.

Although job training will be a component of the program when connecting Newark residents when job opportunities requires it, Newark2020 principals repeatedly underscored that the program will also be inclusive of high-skilled Newarkers who are already equipped to take on roles at participating anchor corporations.

“We hear often that Newarkers aren’t ready,” said McClain, but that is a sweeping “stereotype” that doesn’t capture the diversity of the city’s labor force. “We’ll be focusing on all skill levels.”

McClain also said that while hiring local is the right thing to do, the initiative should seen not as philanthropic. It is a way, she said, to help Newark-based corporations enact a smart human resource strategy that is beneficial to their bottom line.

“The business case is real,” McClain said, citing factors like proximity to work and employee loyalty as quantifiable benefits for businesses.

A solution based on partnerships 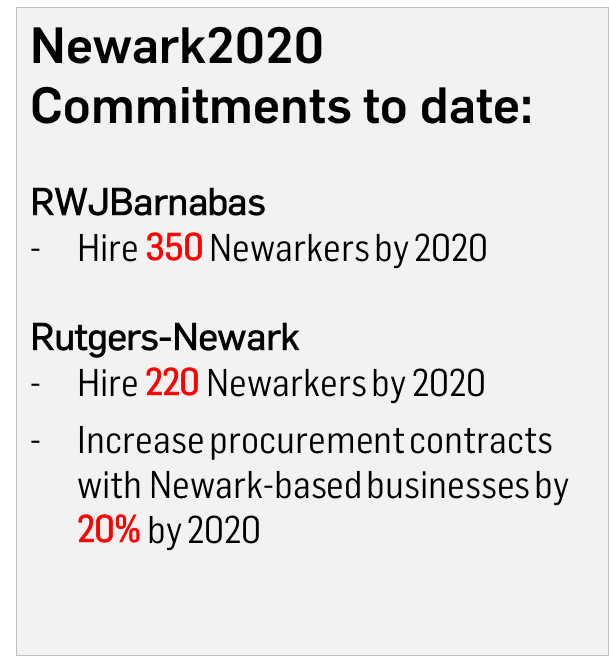 Two of those corporations have already publicly announced actual hiring targets: Barnabas said they will hire 350 Newarkers by 2020, and Rutgers-Newark Chancellor Nancy Cantor announced that the university will hire 220 Newarkers and grow their local procurement by twenty percent, with a focus on doing business with women and minority-owned firms.

While Audible hasn’t yet announced specific hiring targets, the company has already put points on the board for the “live” portion of the partnership: Audible offers significant housing subsidies to employees who move to Newark. According to CEO Don Katz, ten percent of the company’s Newark workforce applied for the housing subsidy program.

CEOs and principals of other Newark-based corporations were short on specifics about how many jobs they will target for the partnership, but expressed enthusiasm for the initiative and pledged their support.

Richard Cammarieri, a lifelong Newarker and NCC’s director of special projects, noted soberly that the initiative “sounds like promises that have been made in the past and not met.”

Despite those past disappointments, he said, this iteration of a corporate commitment to large-scale hiring in Newark just might get it right. “There is something different about this. It feels different. It sounds different. It looks different,” said Cammarieri.

In addition to the anchor institution hiring and procurement strategy addressed by Hire. Buy. Live. Newark, NJISJ’s framework for bridging the employment gap in Newark also entails government jobs programs, an entrepreneurship strategy, and a series of law and policy reforms.

Stay tuned for to BrickCityLive.com for more details on this program and its rollout.