Just after the New Year, Newark technology advisor Seth Wainer sent a call-to-action to the Code for Newark listserv: he wanted more Newarkers to adopt “Next Door”, a private social network for localities that enables neighbors to share neighborhood news, list classifieds, trade recommendations, and otherwise get to know each other.

Four months later, the network is still growing modestly, with only a few hundred people currently signed up. But what it lacks in scale, it’s starting to make up for in geographical reach across the city. The service first took off in the Ironbound, and is starting to get traction in a handful of other neighborhoods elsewhere in the city. Small group of neighbors are now signed up in the Vailsburg, Lincoln Park, Broadway, University Avenue, and Court neighborhoods.

"This will be a great way to push out messages about events, emergencies, and generally increase Newark's civic strength," Wainer said in his call-to-action.

Next Door is available to anyone with a legitimate Newark address. To sign up, users must first enter their street address, zip code, and basic identifying information. The site then asks users to verify their address by entering a credit card (just to verify the address, they say, not to be stored), social security number, telephone number, or address to have a postcard with a verifcation code sent. Once inside the network, users are able to send messages to individual neighbors, their entire neighborhood, or nearby neighborhoods.

Nextdoor neighborhoods are established when a "Founding Member" – the first member from a given area – signs up on the site. That user establishes the boundaries of the neighborhood, and has 21 days to convince 10 of their neighbors to sign up to cement the neighborhood within the system (Next Door enables users to apply for an extension if they're in danger of passing the 21-day threshold).

Next Door itself is a San Francisco-based company that launched in October of 2011. The company says over 31,000 communities are using its platform nationwide.

Shavar Jeffries' 500 Women for Shavar subcommittee hosted a Women's History Month fundraiser and tribute at their Central Ward headquarters Saturday morning. The "Hat and Tea brunch", as it was billed, was attended by a crowd of about 200 women and a spattering of men, including the mayoral candidate himself. Tickets for the hat-themed fundraiser ranged from $40 to $250.

Jeffries' wife Tenagne hosted the event, while subcommittee chair Sharifa R. Salaam (not to be mistaken with her eponymous mother, who is a judge) assumed the role of emcee. Honorees included Esther Tanez, founder of ESTIR Insurance, Celia M. King, executive director of Leadership Newark (where Shavar Jeffries was a fellow about a decade ago), and Vonda McPherson, owner of Vonda's Kitchen.

The fundraiser's headliner, Newark native Mikki Taylor, has been a stalwart in many black women's homes as the beauty editor, and now Editor-at-Large, of Essence Magazine. Taylor took to the podium to speak of her family's storied history in Newark, where her mother was a celebrity hairstylist  who was contemporaries and friends with jazz legend Sarah Vaughn. She delivered a general empowerment message, telling the crowd of her days aspiring to be a journalist when she saw no examples of black women journalists around her, yet understanding that, "There's nothing I couldn't attain if I showed up ready." Like the other speakers, she also issued a specific call to action to attendees to support the Jeffries campaign with time, money, and election day get-out-the-vote support.

Jeffries himself made remarks, noting that "almost two-thirds of the Newark electorate are women, and my administration is gonna look like that." He acknowledged some of the structural impediments to women running successfully in the city, including a the lack of financial backers and mentors for women, and vowed to put an infrastructure in place to help women run. Lynda Lloyd, who is running again for a Central Ward at-large council seat (she lost the special election for the seat against John Sharpe James) and is the only woman on Jeffries' slate, made similar remarks at the beginning of the event.

This coming Friday, April 4, the team that created the P.B. Soldier graphic novel will host a panel and networking event about the future of gaming at The Atrium in NJIT's campus center. The event follows a panel that took place in Newark this past fall at Fortress of Solitude, where P.B. Soldier creators Naseed Gifted and Dilettante Bass discussed how to get started in the graphic novel business along with Brick City Tech meetup founder Anthony Frasier.

Tickets will go on sale to the general public beginning April 7 at 10 a.m. local time at www.oprah.com/tour.

“All of my life I have wanted to lead people to an empathy space. To a gratitude space,” said Oprah Winfrey. “I want us all to fulfill our greatest potential. To find our calling, and summon the courage to live it.”

Each tour stop will span two days. On Friday nights, Oprah will take the stage, bringing her personal story and insights to life in a one of a kind intimate evening.  Then on Saturdays, Oprah will lead a day-long gathering of thousands with handpicked thought leaders and pop culture icons including Iyanla Vanzant, star of OWN’s hit series “Iyanla Fix My Life,” regular O Magazine contributor, best-selling author and spiritual life coach; best-selling author of Eat Pray Love, Elizabeth Gilbert; and one of Time 100’s Most Influential people, Pastor Rob Bell. Additionally, world-renowned author and pioneer in mind-body medicine Deepak Chopra will take the stage in select cities.

Tickets for the weekend event start at $99. In addition, VIP experience, concierge and gift bag opportunities will be available depending on ticket level. For more information on the tour, visit www.oprah.com/tour.

I was recently in to see Marty Green, owner of Halsey Street newcomer Green Chicpea, when I was struck by the vibrant artwork on the walls. Green Chicpea serves kosher Moroccan cuisine, but the artwork didn't strike me as particularly North African.

It turns out the works are paintings by his next door business neighbor, Gifts East West. I grabbed my iPhone to get a quick take on how his neighbor's artwork wound up on his walls, in his words (forgive the hum of restaurant equipment in the back – we went for it without a mic).

Green Chicpea is located at 57 Halsey Street. Try the falafel and the mint lemonade.

Get to know the cultured person that goes to the gallery or open mic.

During the Quick Culture Meetup, presented by Gallery Retail, each participant shares in a series of brief discussions that enable them to actually engage during their cultural experience. Each session will examine the array of visual arts, and provide an opportunity for participants to connect with like minds.

What do you do for a living? Why do you work?

Difference between philosophy, spirituality, and science? 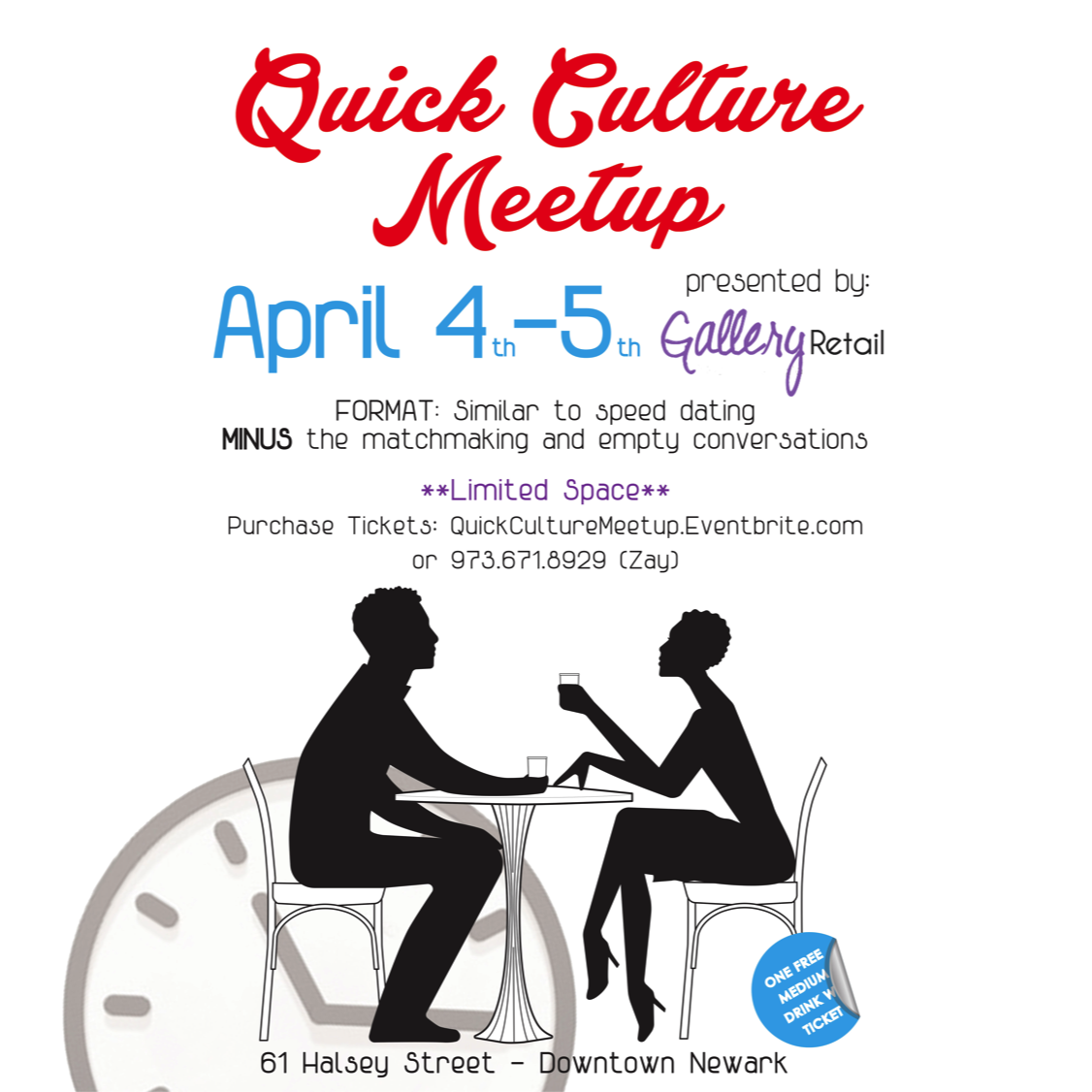 This coming Wednesday evening, the founder of this very publication will be teaching a course on how to identify and attract local customers simply, and on a lean budget, using digital advertising techniques.

In collaboration with ForwardEver NJ and Greater Newark Enterprises Corporation, Andaiye Taylor will present how to use online advertising channels to promote your local business and measure success. She will share proven tools and strategies to use Facebook advertising, Twitter advertising, and online banner ads for local business success.

The course will be held at the GNEC offices on the 27th floor of 744 Broad Street from 6 to 8:30pm. Light refreshments will be served. For non-ForwardEver NJ members, the cost is $10. The course is free for members. To RSVP, visit the event page on ForwardEver's website, or simply text ReMixx26 to (973) 512-4792.

A cement truck parked outside the Hahne's building at the corner of Halsey and New Streets. The historic building, which takes up an entire city block, is being redeveloped after sitting fallow for decades.

This coming Monday, the Newark History Society and the Women's Association of NJPAC's Cultural Legacy Committee will present "Breaking Barriers: Newark Women in Business in the Early 20th Century". Dr. George Robb, who teaches British and Irish history at William Patterson Uniersity, will present the program. The event is free and open to the public with an RSVP at womensassociation@njpac.org or by calling 973.353.7043. Light refreshments will be served.

Extended views on this piece? Email comments@brickcitylive.com with your views. We'll publish the most thoughtful ones to the site.

If the city council presided over a period where mismanagement might lead to a takeover of its budget, should tenure on the council count against candidates in May's municipal elections?

On the heels of the State of New Jersey hinting that they are going to take over Newark’s budget, much like they commandeered the city’s school system, this year’s municipal election is sharply juxtaposed against the backdrop of Trenton’s looming threat.

Since 2002, Ras Baraka has been employed in City Hall as either the Deputy Mayor or Municipal Councilman. It would be impossible to deny him culpability in Newark’s fiscal woes. Baraka, along with two members of his ticket – Gayle Chaneyfield-Jenkins and Mildred Crump – has presided over unprecedented fiscal mismanagement.

Chaneyfield-Jenkins was an at-large Councilmember from 1995 to 2006. She ran as a fiscal conservative during her inaugural council campaign, yet one of her first acts in office was to commission a $10,000 portrait of herself. The audacity of that expenditure was complemented by the councilwoman’s purchase of a $500 waste paper basket.

During her tenure, Mildred Crump traveled to Africa on the struggling city’s dime so wantonly that residents might have thought Ghana was a stop on the light rail. Whatever benefit Newark received from Ms. Crump’s sojourns to the motherland has yet to be evidenced, considering Brick City’s continually soaring unemployment rate and perpetual budget crises.

Another indisputable fact of their tenures in office is that Baraka and the council members on his slate use[d] their offices as their personal family employment agencies. They have hired their brothers, sons, husbands, nieces, nephews, cousins and family friends to work in their offices at taxpayer expense. So, in addition to their $85,000 salaries for their part-time jobs (councilmember jobs aren’t designated as full-time positions) taxpayers are contributing tens of thousands more dollars to the councilmembers’ households.

A cursory glance shows Ras’ brother, Amiri “Middy” Baraka, and Mildred’s son, Lawrence, serving as their respective chiefs of staff. Gayle’s husband Kevin acted in that same capacity when she was on the council. A quick stop in to their offices in City Hall reveals myriad other friends and family in various positions – public jobs that were never posted or made available to other qualified Newark residents.

Baraka’s mayoral opponent, Shavar Jeffries, has three current municipal council members on his ticket. North Ward councilman Anibal Ramos, who abdicated his own run for the mayor’s seat to join Jeffries; East Ward representative Augusto Amador; and councilman at-large Carlos Gonzalez. Political watchers say that a Jeffries disassociation from those council members would instantly scuttle his mayoral aspirations by undermining his relationship with Latino voters, Newark’s fastest-growing demographic. It remains to be seen if it is pabulum that residents are willing to swallow.

Be it a necessary political strategy or maintaining the status quo, voters can't be blamed if they give Jeffries the “side eye” and sigh a collective, “Whatever, man.” The councilmembers on his ticket have some stain on them for the city’s fiscal mess as well. The bright spot, if there is such a thing, is that it appears none of them have used their offices as their personal one-stop career centers.

Contrary to what many constituents believe, the municipal council is responsible for only two things: approving department director appointments, and overseeing the city budget. On the cusp of a state takeover, history would indicate that experience in City Hall is the least necessary attribute in the search for a solution to Newark’s problems.