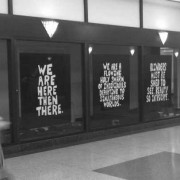 From The Gateway Project:

“You Are Now Here” is a public art exhibition that calls for artists to produce work based on their interactions with a city’s current character and culture. The work prompts artists to publicaly actualize dialogue on the city among the diverse constituents that travel Newark’s Gateway Center concourse.

By orchestrating a hypothetical global roundtable, the 30,000 people that walk through the concourse each day are asked to consider “Now” and “Here” while making their way through the mile-long exhibition. The world created by You Are Now Here presents a variety of issues and questions from different perspectives. Its purpose is to embrace the diversity that makes the city of Newark so unique. Consequently, this show, which is a public art exhibition, is meant to embrace and explore the idea of “publicness” in all of its forms.

The Gateway Center concourse, an indoor street attached to Newark Pennsylvania Station, serves as a resting area for commuters on their travels throughout the The Northeast Corridor, nationally and internationally.  Several questions should be considered for this installation: how can we relay the ideas of local visionaries, leaders, and creatives? How can we address a city’s history, visually highlighting both struggles and successes in the short walk from one end of the concourse to the other, in a manner that mirrors the moment in history that we are living in? How does the city’s current culture compare to that of other cities? Is there a sense of nostalgia that is transcends all city-spaces? Is there room for chimera; moreover, is there space to make our dreams for and about a cityscape into a visual reality? Where does the whimsy of our personal interpretations, sentimentalities, and wishes situate itself within the context of ‘here’ and ‘now’? 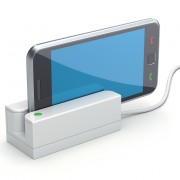 Mayor Ras J. Baraka and Acting Finance Director Danielle A. Smith announced today that Newark property owners can pay their property taxes on-line or by phone, starting today, and use credit cards, debit cards, or e-checks to do so.

“We are determined to give our taxpayers the highest quality of services possible, making use of cutting-edge 21stcentury technology,” Mayor Baraka said. “Enabling taxpayers to pay their property taxes on-line adds to their convenience, our efficiency, and helps us transform Newark into a City we can all believe in.”

Taxpayers can use Master Card, Visa, Discover, American Express, or e-checks to pay online property taxes. Taxpayers who use credit or debit cards will be assessed a 2.25 percent convenience fee (with a minimum of $3.75) for doing so, while e-check users will pay a $0.99 convenience fee.

Taxpayers using Master Card, Visa, Discover, or American Express at the cashier window in the Revenue Collections Office, Room 104, City Hall will also assess a 2.25 percent convenience fee (with a minimum of $3.75).

The on-line and phone payment systems are operational as of Wednesday, January 28. 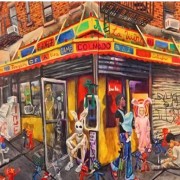 Gallery Aferro will host Lost Innocence: Paintings on  view February 20, through March 21, 2015. The exhibition features a selection of painting displayed at 85 Markets Street, part of the Activate: Market Street series.

In the exhibition, the artist merges childhood familiarity with the many realities imposed. This collection blurs the barriers between popular fantasy and reality, to invite a wider view of what “is” – celebrating the illusion of life, death and dreams, bringing them together and erasing all boundaries.

It was the NYC streets corners, the barrios, the bodegas, the housing projects, and all the stories that they spawned. Those stories, Saturday morning cartoons and the elements of Hip Hop music that guided this series. All the pieces have an individual story to tell, a lesson to be taken. From “Alpha Male” starring the cartoon character Alf, Alfalfa and others, it’s a play on words and imagery conveying a story about that aggressive male energy. The “ShoeBox Business” blurs the line between innocent sesame street characters and the cocaine business that the Dominicans in Washington Heights dubbed the shoebox business. All these pieces bring color, light and magic to a grim gloomy situation. These paintings are like tombstones for a nostalgic time that has passed. 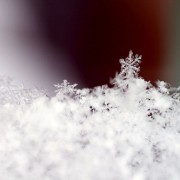 Via Newark Downtown District, road closures at downtown intersections will be in place Monday through Wednesday of next week due to construction:

Please be advised that Rutgers Police Department has informed the Newark Downtown District that there will be construction in front of 15 Washington Street on the following dates:

Late last week, 146 entrepreneurs — including 56 from Essex County — graduated from Rising Tide Capital’s (RTC) nationally recognized 12-week Community Business Academy (CBA) with a newly-acquired business education, an expanded network, and access to the support and resources they need to start or grow a successful business. In a historic moment in the organization’s 10-year history, the 1,000th entrepreneur graduated from the program, as part of the largest CBA class to-date.

The new RTC entrepreneurs joined an alumni network of 968 CBA graduates across Northern New Jersey in a graduation ceremony held at Saint Peter’s University. Featured speakers included Virginia Bender of Saint Peter’s University, Rising Tide Capital’s Chairman of the Board of Trustees Doug Forrester, cofounders Alex Forrester and Alfa Demmellash as well as representatives from the eight sessions of the CBA. During the ceremony, graduates received a Community Business Academy completion certificate and free membership into the Statewide Hispanic Chamber of Commerce of New Jersey.

Among the graduating class was Newark native D’TaRelle Tullis, who is making a difference in her local community. With a mission to fight childhood obesity and provide affordable dance classes to surrounding communities, Tullis started her mobile dance studio Pitter Patter Feet in 1993. Starting with schools in urban cities like Newark, Maplewood and Irvington—she teaches ballet, hip hop, jazz and tap to youth combining dance with classroom instruction.

“Most families in my hometown lack the funds to offer their children professional dance classes; my business allows me to provide that opportunity. While my parents were unable to afford dance classes while I was growing up, I hope to infuse physical activity into the everyday curriculum to ensure the optimal development of youth,” she said.

With clients ranging from childcare facilities to public schools, Tullis uses her expertise as a New Jersey State approved consultant and trainer in early childhood development to create classes that provide physical and social development. While she started her business 22 years ago, Tullis took the Community Business Academy to gain the business and financial management acumen to sustain her business.

“I been in business for a really long time, however while I enjoyed the artistic side of teaching the dance classes I needed help with actually running the business. The CBA was extremely valuable. I learned that I needed to create a system to my everyday work to ensure I deliver excellent quality services. I also learned a lot about myself and built lasting relationships with my classmates and instructors.”

Since taking the Community Business Academy, Tulis has won $3,000 for Pitter Patter Feet after pitching her business in the Newark Innovation Acceleration Challenge.  She says her participation in the CBA gave her the additional boost of confidence needed to present her business and talk about pricing and book keeping. Tullis plans to explore options for creating online classes to expand her reach to more students.

Newark’s CityPlex 12 movie theater is offering a special screening of Ava Duvernay’s Selma, a film about the pivotal 1965 march. Hailed for its performances, for underscoring the severe threats braved by marchers, and for elevating civil rights heroes who have heretofore been unsung, the movie is also incredibly timely in the wake of present-day protest movements in the wake of grand juries’ failure to indict the police officers who killed Michael Brown in Ferguson, Missouri and Eric Garner in New York.

CityPlex12 is offering the screening at the discounted price of $4.95 on Martin Luther King Jr. Day – Monday, January 19 at 9AM. See the flyer below for more information about the special screening.

Did you know that the modern American museum was invented in Newark in 1909? The Newark Museum’s vast and diverse collections will be highlighted at the 61st annual Winter Antiques Show, which will take place at the Park Avenue Armory in New York City from January 23-February 1, 2015.

From traditional to contemporary, from ancient to modern, the Museum’s collections showcase a broad range of works that explore the past, inspire the present and provide a glimpse into the future. Selected as the Winter Antiques Show’s annual loan exhibition, Ahead of the Curve: The Newark Museum, 1909-2015, will feature pieces from the Museum’s American, as well as Asian, African, Ancient Mediterranean, and Native American objects. The 2015 loan exhibition sponsor is Bessemer Trust.

Celebrating its 106th year, the Newark Museum has been at the forefront of collecting and exhibiting since the opening of its inaugural exhibition of The Eight (Robert Henri, Everett Shinn, John Sloan, Arthur B. Davies, Ernest Lawson, Maurice Prendergast, George Luks, and William J. Glackens) that was organized by the Macbeth Gallery in New York that mounted the first “Eight” show.

“The Newark Museum was one of the first to acquire an oil painting by Ernest Lawson (1910), the first to exhibit folk art (1930), and the first to give a one-man show to a living American artist–Max Weber–in 1913,” said Ulysses Grant Dietz, the Museum’s Chief Curator and Curator of Decorative Arts. “Additionally, the Museum possesses the first abstract painting ever completed by an American artist, a work done by Arthur Dove in 1910. The Museum has continued to build on this solid American foundation, while looking outward towards the world. It was the first to seriously explore the art of Tibet, and the only museum whose holdings represent the Arts of Africa from the Mediterranean to the Cape of Good Hope.“

The Winter Antiques Show is America’s most distinguished antiques show, featuring exceptional objects exhibited by 73 specialists in American, English, European, and Asian fine and decorative arts from antiquity through the 1960s, all vetted for authenticity. The Show’s 2015 Presenting Sponsor is Chubb Personal Insurance.

All net proceeds from the Show benefit East Side House Settlement (ESHS), which provides access to quality education and technology training as gateways out of poverty to students in the South Bronx, one of the nation’s poorest congressional districts. ESHS’s goal is to help motivated students graduate from high school, enroll in college, and build the skills necessary to secure good jobs. 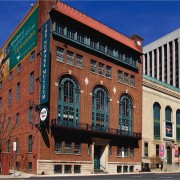 The Newark Museum Second Sunday program features lectures, performances, tours, art and science demonstrations and workshops, music, and a special brunch menu. The day runs from noon to 5 pm and all events are free with admission unless otherwise noted.

The January 10 event will celebrate the holidays and the exhibitions The Shape of Light: Gabriel Dawe, Outside the Lines: Color Across the Collections and Chromatics: Minimalism and Color Field Experiments.