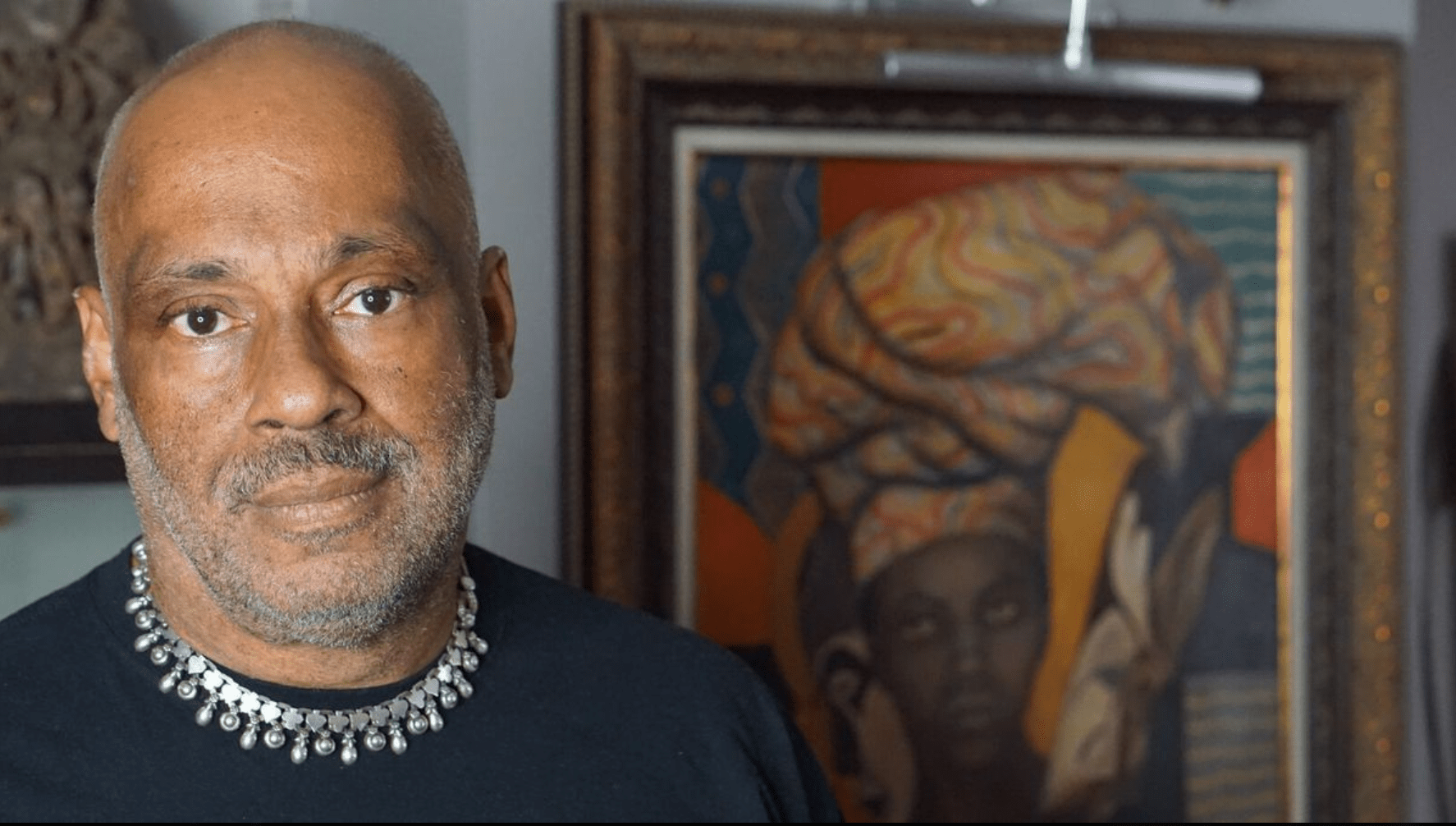 Danny Simmons’ solo show, “disRUPT Newark,” will open at Fownders Gallery in Newark on Thursday, October 12th. He will appear on the “A Conversation With…” panel at Gateway Project Spaces on October 15th (purchase tickets here).

Danny Simmons spent the 80s developing himself as an abstract expressionist painter, earning stature in the New York art scene and making a way for black artists to break into the art world with a gallery located on the ground floor of his Bed-Stuy home.

Now Simmons is head of the Rush Philanthropic Foundation and has television and Broadway credits to his name with Def Poetry, which he co-created with his brother Russell Simmons. I spoke to Simmons about the importance of access for black artists, his approach to his work and his upcoming showing at Open Doors Citywide Arts Festival in Newark.

Andaiye Taylor: How did you get your start as an artist?

Danny Simmons: I got my start from my mother. She was an amateur painter, so I grew up emulating her. My father pushed me towards a nine-to-five, which [for me] was being a social worker, but after some years doing that I decided to do art. I considered art school but I figured, “What the hell? I’m DIY.”

When I went out there [in the 80s], nobody was showing black artists, so I decided to start showing artists myself, with myself included. I created a number of indy art shows, and my first gallery was Sanctuary Gallery in Bedford Stuyvesant, now Rush [Arts Gallery].

It was a rocky start because I was unknown, black and “mother-trained.” It was a lot of hard work to get known, but people thought I was pretty good and I [spent time] hanging out with artists. Young artists: the most important thing [to break into the art world] is networking and meeting people. I made sure I let people introduce me to people, and [focused on] giving people opportunities at my galleries.

Taylor: What was the art scene like in New York in the 80s?

Simmons: Sanctuary was founded around 1988. I took everything out of the ground floor of my brownstones and created an open space for my gallery.

At this time there was really no gallery scene in Brooklyn. There were two black galleries that were around before I got in the game. One was Spiral in Prospect Heights, and the other was Dorothy’s in Crown Heights.

There were a lot of [black] artists and[just] two little storefront galleries. It couldn’t accommodate a lot of us. A lot of people at that time were putting on shows in their homes for their friends. It was more, “We have to do for ourselves [and] show ourselves.”

Taylor: Are there more opportunities for black artists now?

Simmons: It has turned around somewhat for black artists. There are many more opportunities now than there were back then, largely because of galleries that really just promoted excellent black artists.

One of them is your own Aljira in Newark, where I had my first big solo show. Then there was Rush. The artists that left from Rush found their way to the residency programs at Studio Museum (in Harlem) and then out to the art world.

A lot of the [prominent black artists] you hear about today got their start at Rush. With Studio Museum, under Thelma Golden’s direction, white art directors and institutions began looking at black artists.

Taylor: In general, what piques art directors’ interest in artists?

Simmons: In many ways it’s originality. And even though I don’t have them—a number of artists of color don’t—people do look at credentials. A lot of prominent artists went to prominent art graduate schools [and] went to the right residency programs. Those things are important to an artist’s career.

[When it comes to black artists] one of the things that I think people in the mainstream art world take a look at is race-based artwork. That means work that is explaining the black experience—not [necessarily] to other black people in a celebratory way, but more as a thesis: “This is who I am.”

It’s not a slave narrative, but it is based on identity. A lot of galleries have centered art by black people around black identity.

There were other black artists who were pure abstractionists, who were not doing race-based stuff. And the older artists talking about black identity was talking to us—about us being proud. It seems to me that the art that’s being pushed out there now is a view of black people by black artists for white people to look at.

Taylor: Would you say that’s problematic?

Simmons: If that’s the predominant narrative, it narrows the field for artists to be successful. Now you’re seeing [artists like] Mark Bradford doing abstract work and getting notoriety for it. Once you get in the door you start changing the way the door looks.

Taylor: How would you describe abstract expressionism to person who isn’t familiar with art?

Simmons: It’s a hard question, because [abstract expressionism] is your own interpretation of how you think and feel. It’s movements and gestures based on your emotions. It doesn’t have to start with a thought—“I want to express this”—the expression becomes a part of your art making [itself].

With me, instead of knowing [ahead of time] what I want to paint, one line informs the next. It’s more process-oriented instead of thought-oriented. The process is what’s informing you.

Taylor: It reminds me of writing a little bit. Sometimes I sit down to write and I know exactly what I want to say, and the writing is all about building that narrative or argument most effectively. But other times, the writing facilitates the thinking and it sort of forms itself.

Simmons: [With] writing it’s harder to be process-oriented, but I’m a writer also, and a lot of my poetry and the books I’m writing are process-oriented. It starts with a theme, but one line informs the next, and the process takes place in my mind as I’m doing it.

Taylor: So if someone is trying to understand or draw a conclusion from your work, are you able to explain it to them?

Simmons: It usually expresses something to me that may or may not be something I can tell other people because it’s a highly personal thing. I can know if [the works is] spiritually, emotionally and intellectually satisfying without being able to say what it is. [There are] a lot of markers that tell me it’s successful. The painting will tell you whether it’s successful.

I’m always surprised by what people get from my work. One of the things I find intriguing is that people always find things in the work that they can relate to. I have a painting at my house right now—it’s going to be in the show—and even [curator] Noah [Kane-Smalls], who is well-versed in abstraction, says there’s a rhinoceros running across that page. I say there’s no fucking rhinoceros (laughs). So people tend to find things that they can relate to. And it takes time to move away from relating everything to the physical world.

Taylor: Can you preview your solo exhibit at Fownders Gallery? What can people look forward to?

Simmons: All the work that I’m going to present at Fownders is from this series I’ve done [that involves] welding fabric and paint. It’s abstract with African fabric.

One of the things that they say about modern art is that it has its roots in African art. I’ve been creating abstract expressionist-type work playing off of the fabrics and patterns. I’ve been playing around with [the technique] for four years, and now it’s hard to tell where paint stops and [the] fabric begins.

One of the things that’s always been important to me is to express our blackness in ways that are not figurative, in ways that are more spiritual, so that when you walk up to [the work] it is uniquely African without screaming Africa at you. That’s why I coined “neo-African abstract expressionist” 15 years ago. It takes the spirituality of African art and tries to put it on canvas.

Simmons: Where else will your work be on display at Open Doors?

Taylor: My work is going to be up for sale at the Ras Baraka fundraiser. If you get there early you can get a $5,000 piece of artwork for $500.

That event will give people who don’t have a lot of money the chance to get artwork for a price they can afford and get them collecting art.

Simmons: Why do you think it’s important for people to collect art?

Taylor: It’s important that you have representations of your culture around you and in your house. We live in times when a lot is being stripped away from us. Having African and African-American art in your house is spiritual reinforcement.

And artists can’t live without selling their work. If our community does not support our work we will not have any artists, and that will be a terrible thing.

Taylor: You’ll be a panelist at “A Conversation With…” (on Sunday, October 15th). At a high level, what do you think is the nexus between art and social impact?

Simmons: Artists are great troublemakers and rabble rousers and informers of what’s going on, and art has a huge social impact if you look through history. It galvanizes and moves people to action.

Taylor: You are the eldest of the Simmons brothers. What was your influence on them?

Simmons: To me they were “little brother.” Russell and I shared a room—bunk beds. We hung out together. We did a whole lot of crazy stuff together. We later bought a house together. Russell credited me with sparking his philanthropic interest. We won a Tony Award for Def Poetry. When he accepted it he said, “We wouldn’t be here without Danny’s idea.”

Run is my baby brother, so him and Russell have a different relationship. They worked together on that whole hip-hop thing. I was the big brother who took Joey to the movies. Joey was the little brother I always tried to protect.

Danny Simmons’ solo show, “disRUPT: Newark,” opens at Open Doors Citywide Arts Festival with a reception on Thursday, October 12th from 9 p.m. to 1 a.m. at Fownders Gallery (11 Wellington Way, Newark, RSVP required). He will also be co-presenting “Power In Paint: Empowerment Through The Arts,” a rare opportunity for people to collect original works for at one low price (Thursday, October 12th from 6 p.m. to 9 p.m. at Hahne’s Building, Grand Court). Lastly, Danny will join Dr. Ntozake Shange, Donna Walker-Kuhne and Anthony Delgado for “A Conversation With…,” a panel discussion about the intersection between art and social impact moderated by Sharnita Johnson of the Geraldine R. Dodge Foundation (tickets are $45 and available online).

PreviousNext
Largest scoreboard of its kind in the world unveiled at Devils’ season...