What we choose to value 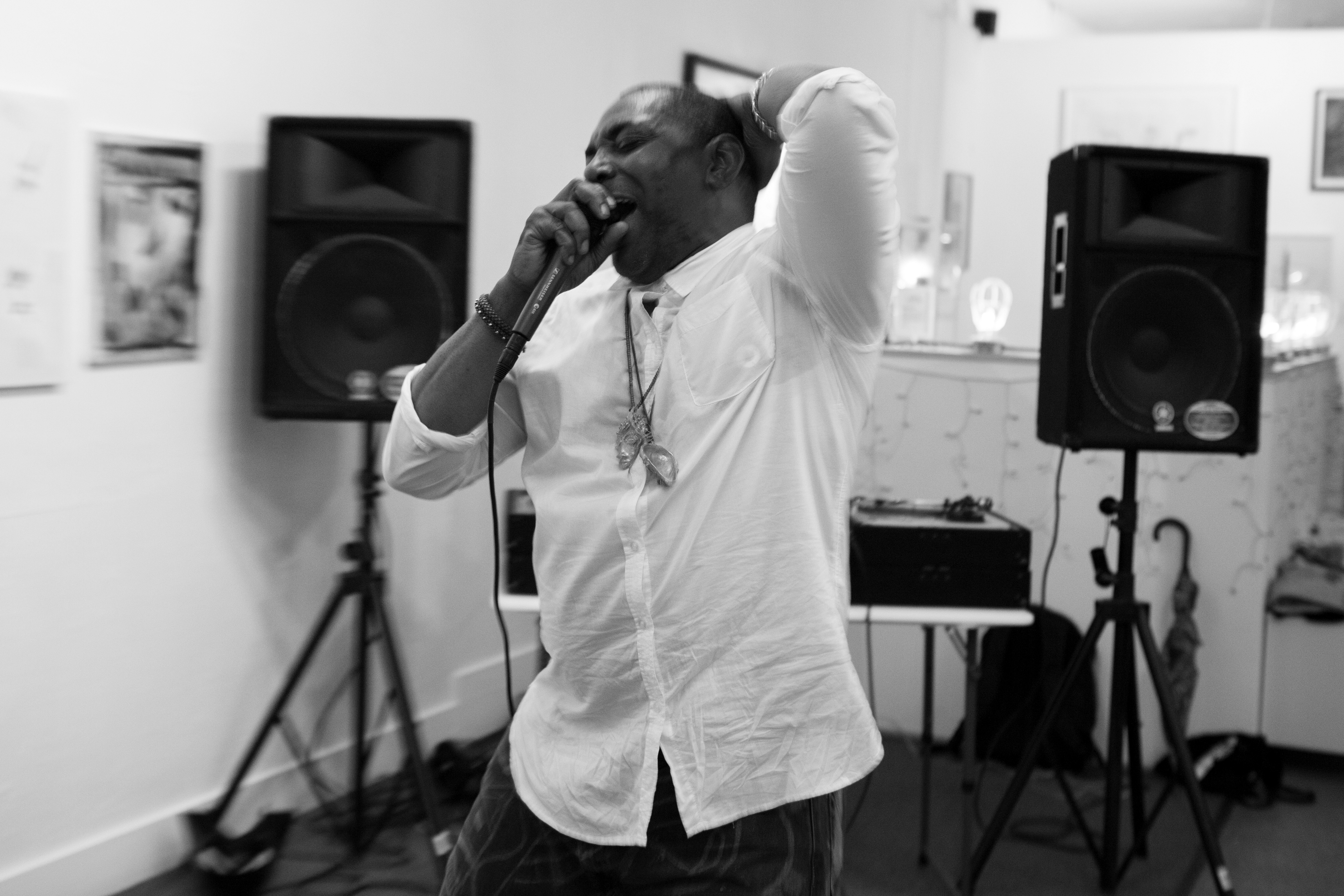 Editor’s note: Hycide Magazine will host a celebration of Gant’s life and legacy on December 16 from 5-9 p.m. at the Newark Museum.

This is dedicated to Jerry Gant (1962-2018)
and to my collaborator and beloved, Evonne M. Davis
and to the kids (these days)
and to the elders
and to anyone and everyone else who did or does the work.

First Verse: How Long ‘Til We Are Visible?

Not that anyone asked but here I am walking past a Newark city street sign that directed people towards the building City Without Walls Gallery[1] once occupied.

I am thinking of a meeting for the Newark Walks signage trail featuring significant sites in the city.  I had asked if any art galleries were to be included.

The response was something to the effect of “Well, they aren’t permanent enough.”

Still walking, I am rounding the corner of Market Street as I have countless times since 2003 when I was 23, and now I am 38, and I think about how the gallery my partner Evonne M. Davis and I founded, Gallery Aferro, is still here. Fifteen years. Now that Aljira, a Center for Contemporary Art (open for more than three decades) is closed as well, our artist-founded organization is the oldest gallery currently open.

And I walk, and I open the doors of the building where my gallery is. Which has no directional street signage, even. But many, many people know the way there. When is something permanent enough to be seen? Is the work of our lives merely provisional?

All of this is not about me, or street signs, or particulars of any kind.

It’s about seeing and valuing what is right in front of you in your community.

Imagine if the money that has been spent over the past decade pandering to this or that celebrity was spent on some modest but quality promotional work for some of our most talented, veteran local artists?

Imagine if we decided to take back the system of value from the people who seem to be in control of it, and got to actually define our own local landmarks?

It is crucial to celebrate, support, document and appreciate your local people and spaces while they are alive.  In case I wasn’t sure already, I have learned beyond doubt in the past few years of working with our artist elders that if we don’t tell the history of our own communities it will be erased, ignored, or our accomplishments misattributed to entities deemed more palatable. Along the predictable power axes of race, gender, class and sexuality. Who is ascribed the title of “visionary,” or “leader?” Whose work is seen?

This celebrating of the local I speak of is not some calcified tokenizing hyperlocalism. That extreme is a reaction in response to the wounding salt of the other extreme, which is erasure, the misattribution, the willful blindness and absence of aroused curiosity about people and place, the tabula rasa view.

No, I want a vigorous, rigorous love of who each of us is, our idiosyncrasies and unique talents and contributions, our embodied consciousness. Not the faceless “local artist” as a kind of abstracted checkbox, a little press release filler.  Not “the galleries.” I’m talking names. Being seen, and ascribed worth and value for our work.

Right now I personally straddle somewhere between elder and young’un when it comes to artist/culture worker and queer generations. As Jerry Gant said just weeks ago, “This is the time to perform for those who came before us…” Another artist who, like me, also sustains an arts space, Baltimore’s Pierre Bennu, wrote of the late Ntozake Shange: “She gave us, back to us. There are artists that do that from time to time in every generation and she was one of them.…I felt like so many of our greats are passing away in these very quiet ways, and we’re not acknowledging our heroes like we have to. We have to acknowledge them as the paradigm shifts and we become those elders.”

It is notable that the citywide arts festival began with artists opening their spaces—usually live/work spaces—and generally commercially zoned (read: illegal to live there).

This is significant because any conversation about spaces happening presently needs to be firmly grounded in the reality of artist’s and art’s orgs’ budgets and actual funding sources.

A few years back I was asked to attend a meeting wherein would-be councilmen spoke as to whether they had a vision for the city that included the arts.  One indicated his by speaking of seeing off-Broadway plays in a “Theatre with, you know…leaking pipes and everything.”

To mangle William Blake[1], if the leaking pipe does not kill a theatre let none say that the art was in consequence of the leaking pipe. Another way to put it: don’t confuse the correlation of tiny budgets with the causation of excellent work.

I have been to way too many meetings in the past two years where discussion ran something to the effect of: “Small orgs should just get stronger boards, increase their budgets, and then keeping the arts in communities would be possible.”

So I say to anyone interested in this issue: let’s give up the fantasy that we don’t have to intervene and can just let unfettered market forces shape communities.

Let’s proudly say that it is necessary to interfere. To joyfully subsidize.

Unfettered market forces are no more “organic,” and subsidizing arts spaces no more “artificial,” than say, a 30-year tax abatement for a commercial project is.

It’s not dirty to say what you want.

Say you want it.

Say you want art, artists, and art spaces in your community.

I reject hand wringing and acting like the disappearance of arts spaces is inevitable. It’s not. But we have to subsidize based on the actual economics of the (real, not theoretical) culture workers in our beloved community.

How about an endowed arts fund for small Newark art spaces? To those in positions of power and access, this is your moment to act. With works, and not just professed faith.

This is it. This is the moment to act.

Last Verse: What We Choose To Value

I am walking down the streets I have walked so many times before, and I am thinking of all the faces and voices of people I know and have known, and all the work, the stories, the contributions, the beautiful, beautiful moments. I’m thinking about how much of what I know of our local cultural history I know because another artist or culture worker told me about it. And I share the stories in turn.

Power concedes nothing on its own. I’m thinking of Newark’s own WBGO, whose origins lie with an underutilized broadcast license that activists convinced the Newark Public School System to transfer for use as a jazz station.

This shows us that creating and sustaining space for work of cultural value doesn’t just happen in some automatic, predetermined way, but is instead a purposeful interruption of the order of things, a creative act. And it comes from choosing what we value, in a sustained way.

Again I say, how about an endowed arts fund for the city? A purposeful interruption of the inertia of the current order of things. A collectively authored love letter, declarative, of what we hold dear and don’t want to lose.

Alice Walker writes, in her poem, “We Alone,” about how we choose value, and the power that has.

“We alone can devalue gold
by not caring
if it falls or rises
in the marketplace.”

To those in positions of power and access, I say to you, as best I can from the platform I have, for as long as my words can have some staying power, today, in 2018;

What are you choosing to value?

Emma Wilcox is an artist, and co-founder, with artist Evonne M. Davis, of Gallery Aferro, established 2003 in Newark, NJ.

if you’re serious about action.

[1]  a blight never does good to a tree & if a blight kill not a tree but it still bear fruit let none say that the fruit was in consequence of the blight.

IHOP Newark to host free “Breakfast For Dinner” event for families in n...
Scroll to top