Nights at the Museum 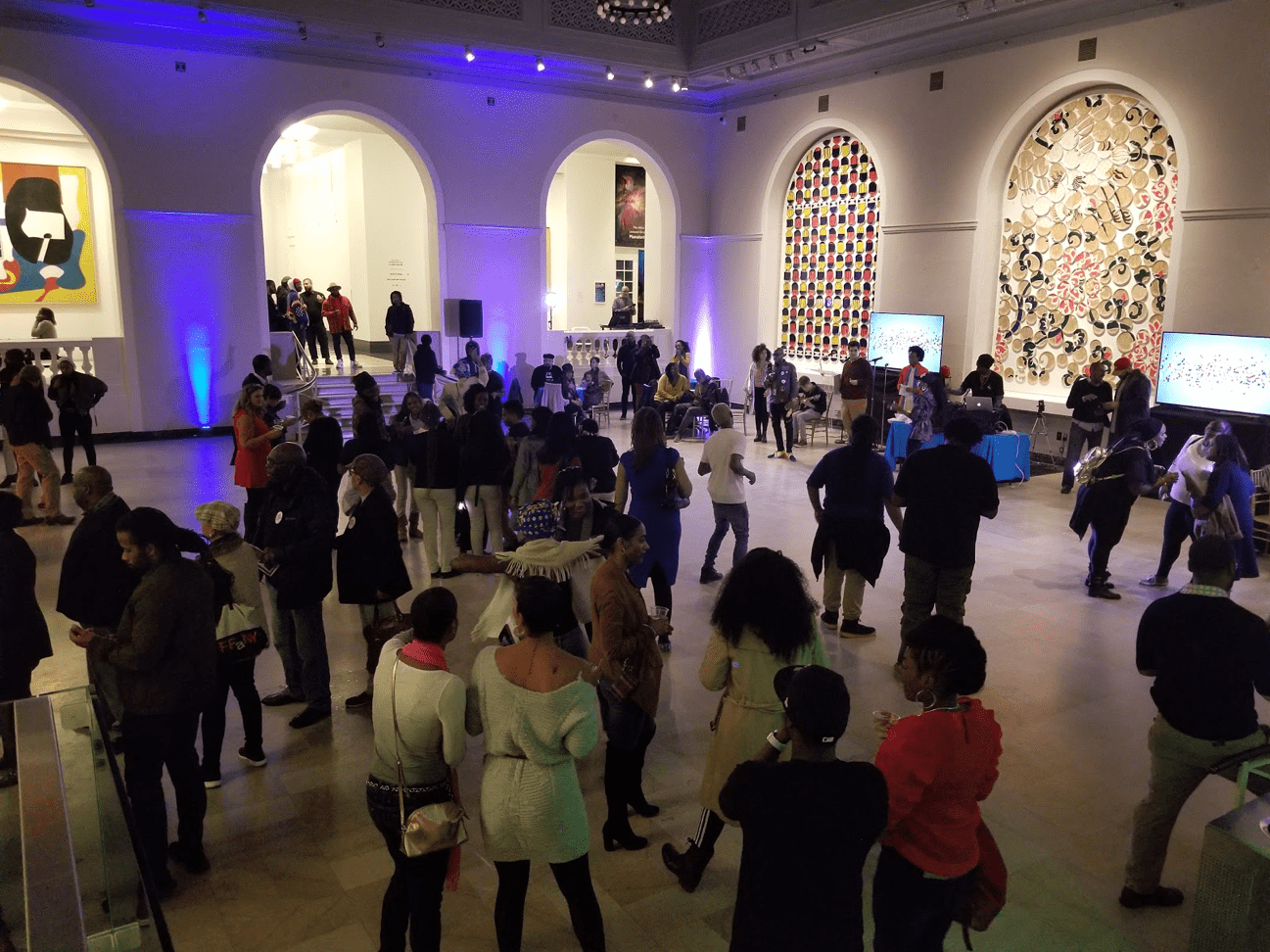 The crowd at the “For Freedoms” installment of Newark Museum’s Late Thursdays series. Photo by Manny Faces

If I told you that I spent an evening listening to a DJ spin a variety of world music, watching performances by dance troupes, singers — even a beatbox and trumpet duo — all while sipping on wine and nibbling away at a catered meal, you might want to know…

Where’s the party at?

Well, believe it or not, the party was at the museum!

On October 18, Newark Museum hosted the latest iteration of its “Late Thursdays” event series, which it describes as “creatively inspired social evenings that offer a fresh take on the Museum’s captivating collections, through a dynamic mix of music, food, drinks, art, and entertainment.”

This night was presented in conjunction with For Freedoms, a “platform for civic engagement, discourse, and direct action for artists in the United States.” Inspired by the “Four Freedoms” work of iconic American painter, Norman Rockwell, the organization believes that art and artists are key to protecting some of America’s base freedoms: freedom of speech, freedom of worship, freedom from want, and freedom from fear. 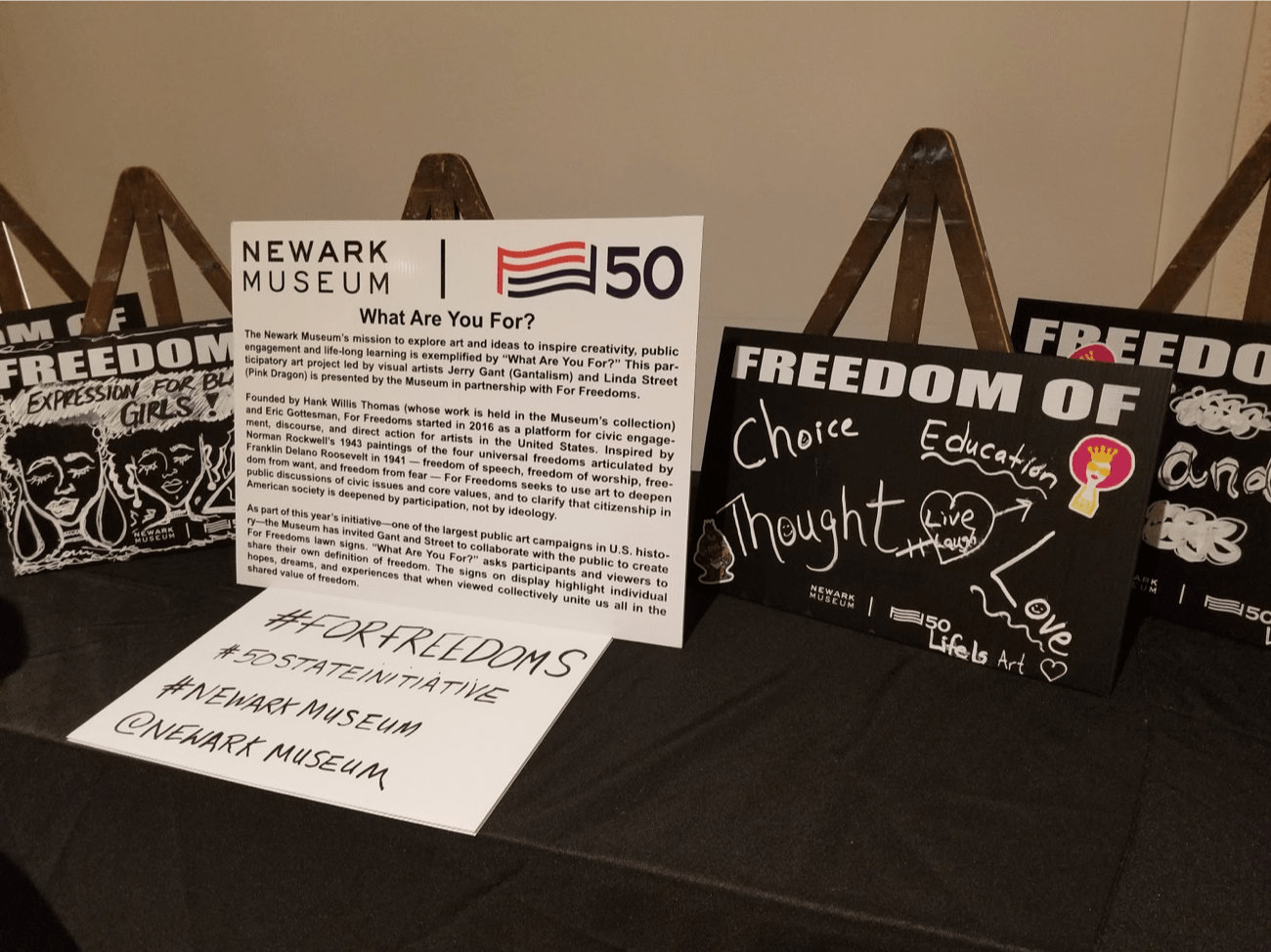 I was previously unfamiliar with For Freedoms, but I did happen to know a couple of the artists scheduled to appear, including D. Cross, the beatboxer, and Lee Hogans, the trumpeter. As someone who moved to Newark in part due to its continuing legacy as an arts city, I enjoy every opportunity to witness the talent and passion that oozes from artists from all genres and disciplines who live, work, or play in Brick City. This was my first visit to a Late Thursdays event, and I would certainly have been fine if that was all the night was going to offer.

But there was so much more.

Before the performances — and after downing the first of the free adult beverages the museum provided — I latched on to what was billed as a short, ‘socially conscious tour’ through the exhibitions. Led by museum docent Darryl Dwayne, the tour highlighted a few select pieces of art in the museum’s collections. There are always items of interest that will catch an untrained eye when aimlessly wandering the halls of any museum, but it’s another experience altogether when being led by someone with Dwayne’s knowledge and skill at helping connect the dots for the relative layperson.

As he led a small contingent of curious folk to various paintings and sculptures, Dwayne expertly engaged the onlookers, transforming what is normally a stoic, one-way interaction into a group effort. We were urged to share our thoughts and speak our interpretations, out loud. Dwayne helped fill in some artistic gaps of course, but for most part — as he promised — much of what we collectively viewed were things the artist wanted us to pick up on.

It was a small, but potent reminder that one does not need to be an expert in art analysis to analyze art.

So at this point, I’m already like, “OK, nice try, museum. You think you’re slick. Trying to lure us unsuspecting art neophytes in with the promise of free food, drink, and music, and then BOOM — brilliantly present us with some artsy, fartsy stuff, and what? You think we’re going to suddenly be better able to appreciate the art on display? That we’re going to instantly become enveloped with the kind of excited wave of emotion that can only come from discovery and enlightenment? That we’re going to text our peoples, lamenting the fact that they’re not here to take part in this simple, but remarkable exchange?”

Even though I felt like I had been manipulated like 2016 Michigan voters on Facebook (allegedly), I wasted no time jumping back into the jammy jam atmosphere in the museum’s great hall. The performances were fantastic. I watched my talented artist friends, but also witnessed the artistry of those I was less familiar with. A reading by artist and author Danny Simmons. A dance performance by The Evolution of Hip-Hop. Powerful words from Jillian Rock. Art making with Linda Street (Pink Dragon) and Jerry Gant (Gantalism). An acoustic performance by singer Autumn Jones. DJ Fauzi on the ones and twos. A screening in the planetarium by SQAD NWK. Vocals by FreQuency A Cappella.

And all of this while For Freedoms shared information about their work, encouraged civic engagement, and helped promote the mighty connection that exists between art and activism. 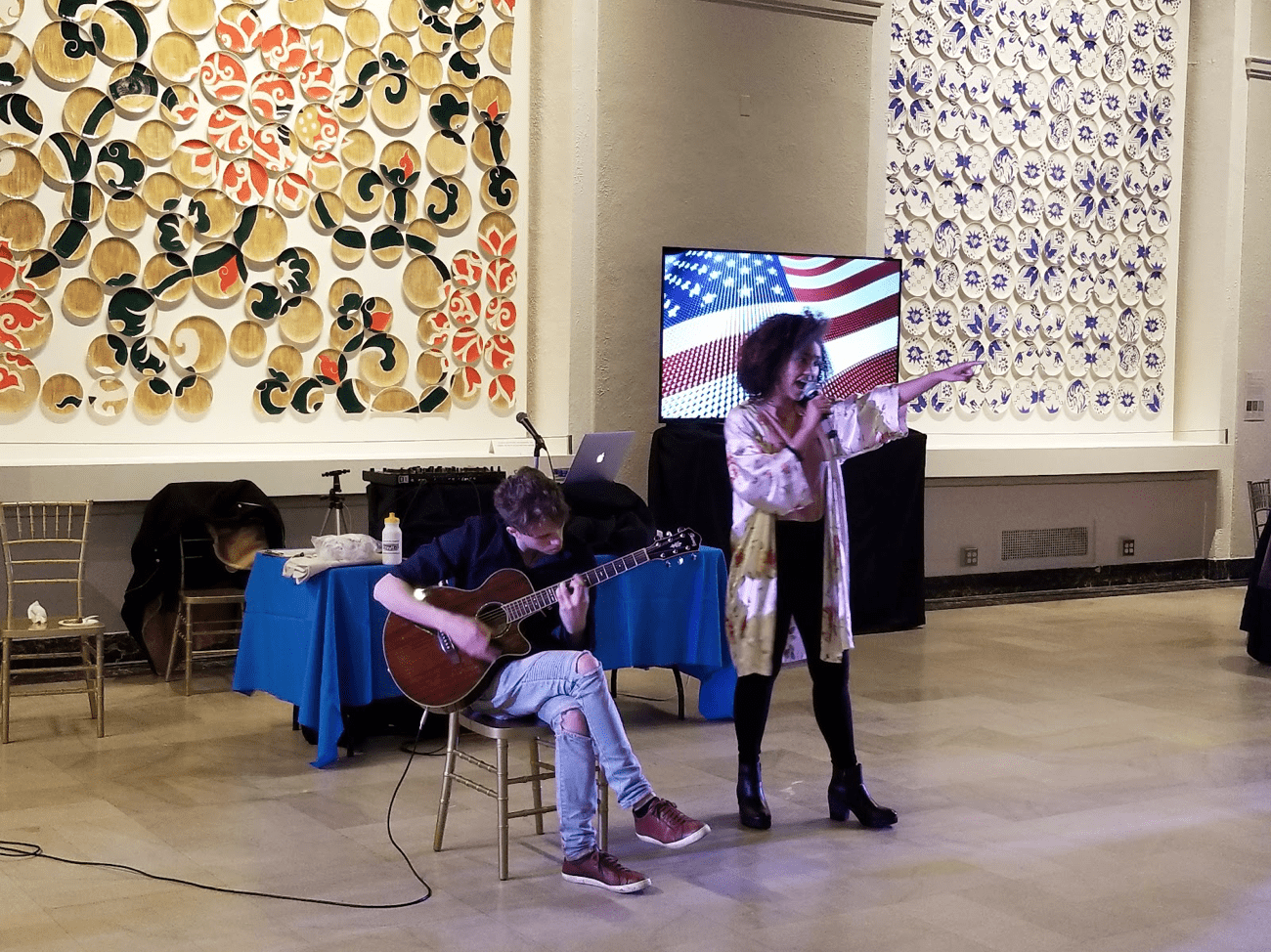 As someone who is a vocal advocate for the inclusion of the arts — particularly hip-hop music and culture — into typically non-traditional spaces, I was greatly impressed by the museum’s open-mindedness in orchestrating this program’s mixed-genre, mixed-discipline approach. It is extremely encouraging to witness legacy institutions recognize the power of these types of efforts to inform, educate, and inspire. Extra kudos for encouraging civic engagement during these tumultuous times.

Museums focus on history, and often tend to be mired in that past. Newarkers are lucky to have one that isn’t afraid to also look toward the future.

For Freedoms returns to Newark Museum on Tuesday, October 30 from 6 p.m. through 9 p.m. for a town hall-style conversation about the intersection of art, activism and civic engagement. Visit www.newarkmuseum.org/TownHall for more information an to register.

Newark Museum’s Late Thursday event series continues on November 15 with Kimono: For the Kulture, a look at the museum’s newest exhibit and celebration of Japanese culture. For more information, visit https://www.newarkmuseum.org/KimonoKulture.