At Home in Newark: Stories from the Queer Newark Oral History Project opens at Newark Library 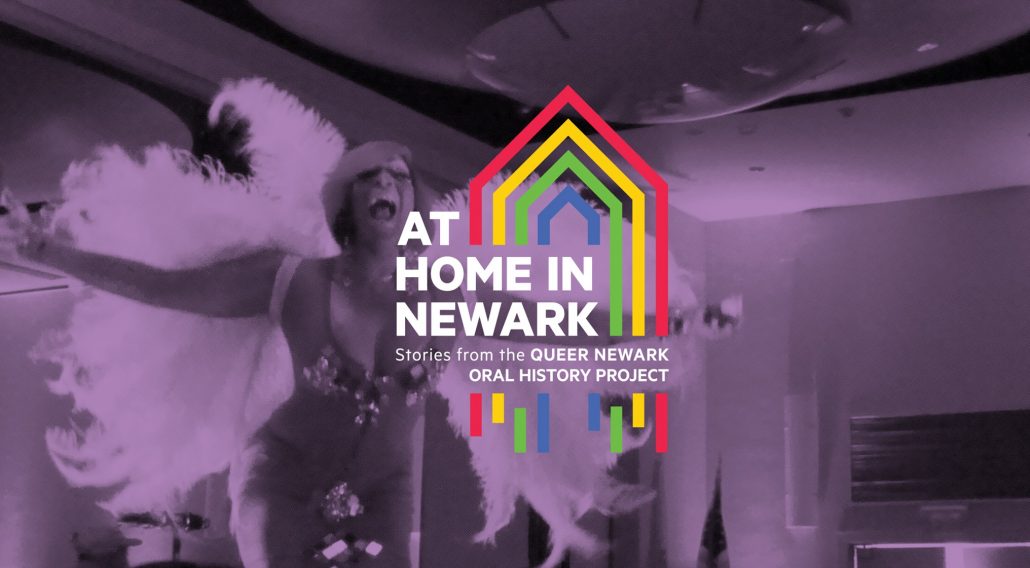 The Newark Public Library launched a new exhibit last week that delves into the history of the LGBTQ community in Newark.

Entitled At Home in Newark: Stories from the Queer Newark Oral History Project, the exhibit will examine how lesbians, gay men, bisexuals, transgender, and queer people who live or have lived in Newark claimed space for themselves in the community, in the face of poverty, violence, illness, racism, and discrimination.

At Home in Newark will be on view at the Main Library (5 Washington Street, Downtown Newark).  Visitors will begin the exhibit in the atrium and continue to the first floor gallery.  The exhibit will remain on view during regular library hours through Thursday, March 1, 2018.

The opening reception included remarks by Pastor Kevin Taylor, who worked with the QNOHP on two special programs. Taylor, who delivered the eulogy at Yendor Productions founder Rodney Gilbert’s funeral in November, spoke about the life of the celebrated arts leader.

At Home in Newark features several interactive and multimedia elements. Visitors will see quotes from some of the oral history interviews on walls and on the supporting piers of the Atrium’s arcade, helping to direct visitors to the First Floor Gallery. Video clips with historic footage from the LGBTQ community’s elaborate balls–part party, part community gathering, part educational center–are also shown. In the 1990s, at the height of the AIDS epidemic, events like the Fireball were places where safe sex information was available.

Exhibit visitors will be able to listen to extended excepts from the oral history interviews either with MP3 devices or smart phones. An interactive station enables visitors to explore critical issues examined in the exhibit, including how they identify themselves and where they feel at home and safe in Newark.

A large map has been compiled that shows the locations of bars and nightclubs such as Club Zanzibar and Murphy’s that became sanctuaries for members of Newark’s LGBTQ community. Visitors are encouraged to identify any other places that may be missing from the map.

The exhibit was curated by students in Dr. Mary Rizzo’s American studies class “Place, Community, and Public Humanities” at Rutgers University-Newark, drawing content from the life history interviews that are included in the Queer Newark Oral History Project, begun in 2011. The exhibition panels and graphics were designed by students in Professor Chantal Fischzang’s graphic design class “Visual Means.”

Dr. Mary Rizzo is Assistant Professor of Professional Practice and Associate Director of Public and Digital Humanities Initiatives at Rutgers University-Newark, and teaches in the Department of History and the Graduate Program in American Studies. Her scholarly work examines cultural representation.  Chantal Fischzang is Assistant Professor of Graphic Design in the Department of Arts, Culture and Media at Rutgers-Newark. Much of her design work deals with identity, immigrant rights, acculturation, and language.

The Queer Newark Oral History Project was begun by activist, writer, and chair of the City of Newark’s Advisory Commission on LGBTQ Concerns Darnell Moore, Rutgers-Newark history professor Beryl Satter, and Rutgers-Newark administrator Christina Strasburger, in an effort to record the lives of LGBTQ residents, past and present, with the goal to make those lives visible. Since 2011, the QNOHP has conducted interviews with more than 40 individuals, many of whom were leaders in the LGBTQ community. Many of the people who have recorded oral history interviews have also donated personal records and objects, which enrich the narratives found in the interviews.

In conjunction with the At Home in Newark exhibit, the Newark Public Library is hosted the inaugural Naughty & Nice Ball | Our House Too, featuring New Jersey voguers, runway walkers, and battlers.

How 47 students from a Newark high school got themselves heard on the floor...
Scroll to top