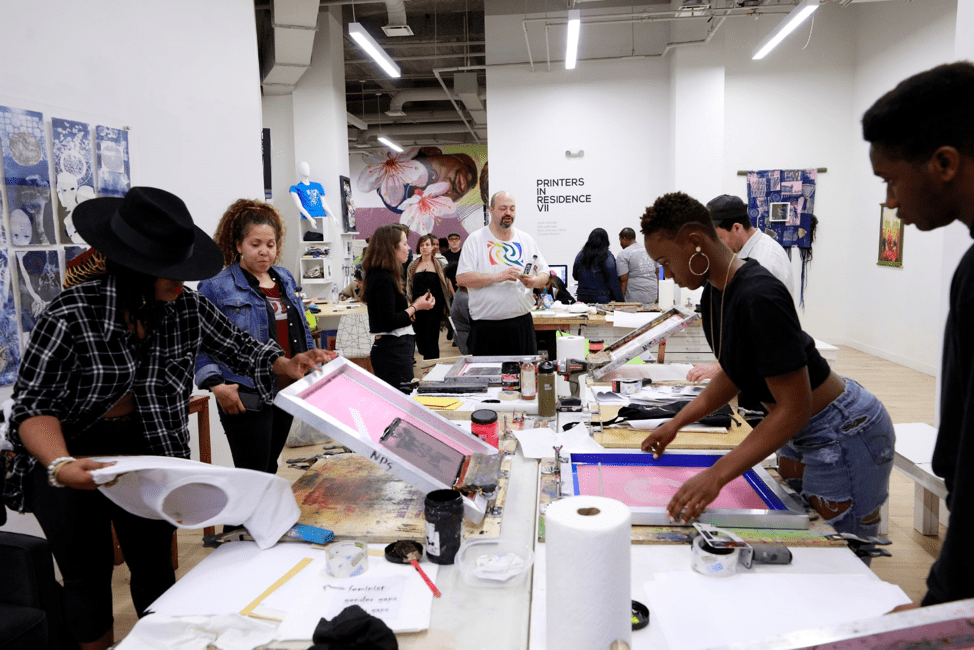 It might seems like yesterday when $187 per month was enough for Lisa Conrad to lease an art studio out of 585 Broad Street in Newark. But it was actually six years ago, and a lot has changed since then.

Conrad, the founding Executive Director of Newark Print Shop – a community printmaking facility – is experiencing those changes firsthand as she searches for a fourth location for her grassroots operation. With the economic rise and recent developments in the city of Newark, finding a new space has become a challenge for Conrad, whose current lease expires at the end of the year.

“As the city shifts in its real estate development there’s less and less opportunities to do projects like this,” said Conrad. “You’re going to see less mom-and-pop shops and more chains, and what that means for the art world is you’re going to see less startups because you don’t have the same access to really affordable space.”

It was 2012 when Conrad began opening up her studio on Wednesday nights to provide space and tools for other artists to create art and share their love for printmaking. According to Conrad, the concept of creating art with other artists came organically, and the workspace became known as Print Club.

Print Club was created in a space that was affordable, but Conrad explained that spaces like this no longer exist.

Despite her current dilemma, Conrad said that the Newark Print Shop has progressively grown overtime and has been fortunate. In fact, the current location at 56 Halsey Street launched in February of 2017 as a resident community partner with Express Newark.

Last Wednesday was Jah’s first time at Newark Print Shop. Jah heard about the shop on Instagram, and after finding challenges with his local Brooklyn print shop, he decided to come to Newark Print Club to do some screen printing on kids’ t-shirts. When asked of his experience thus far, Jah said it seemed like a creative, laid back space.

Jay Golding, a resident artist, said he’s using the residency at Newark Print Club to incorporate printmaking and painting to expand his skills. “[Newark Print Shop] is a community, it’s like a safe space for artists” said Golding. “There’s a lot of artists in Newark, and we don’t always feel like we’re benefiting from a lot of the spaces that’s around here, and the print shop is a space where you can come and feel like home.”

Golding said most people that come to Print Club are there to make t-shirts, adding that seeing so many people come in to make shirts has inspired him to do the same.

Alicia Blanks and Candy have been coming to Print Club for a few months now. They were there last Wednesday making dresses for their company, Miss Diamond Shine America.

“I always knew about [Newark Print Shop], I just never utilized it. Now we’re here at 5:30 waiting for the doors to open,” said Candy with a laugh. When asked how she feels about the contract ending at the print shop’s current location, Candy said “[Newark Print Shop] is for the community. It’s nice to have this space here, and if they take this away it’s going to be a detriment to the community.”

Despite having difficulty securing a new location, saying good-bye to the print shop is not in the plans for Conrad, who envisions the Newark Print Shop being a longstanding art and cultural institution.

“My hope is that the print shop would be a resource for generations, and that it will be a resource when my son, who is two, is an adult, and grown,” said Conrad. “There’s obviously some challenges with startup art spaces, and especially in a transitioning city, it’s sometimes hard to secure space for the long term and funding for long term. But I’m confident in the work that we do, and the impact and the importance of the work that we do–that this should be around and it will be around.”

While a lot of Conrad’s time has been spent meeting with developers and trying secure a new place, leaving her little time to create art, Conrad said that Newark Print Shop is her life’s dream, and she wouldn’t have it any other way.

Teanna Owens is a 2017 graduate of Montclair State University, where she studied English literature and Journalism. During her undergraduate years she was involved in her school’s student run newspaper, The Montclarion as the Feature Editor and a contributing writer to over half a dozen stories. Teanna is excited to begin her freelance writing career with Brick City Live and looks forward to writing about the people and places of the city where she was born and raised.

One Theater Square is leasing apartments and opening its affordable unit lottery...