Conversing with martyrs in Serron Green’s Index Art Center exhibit, U.S. vs US 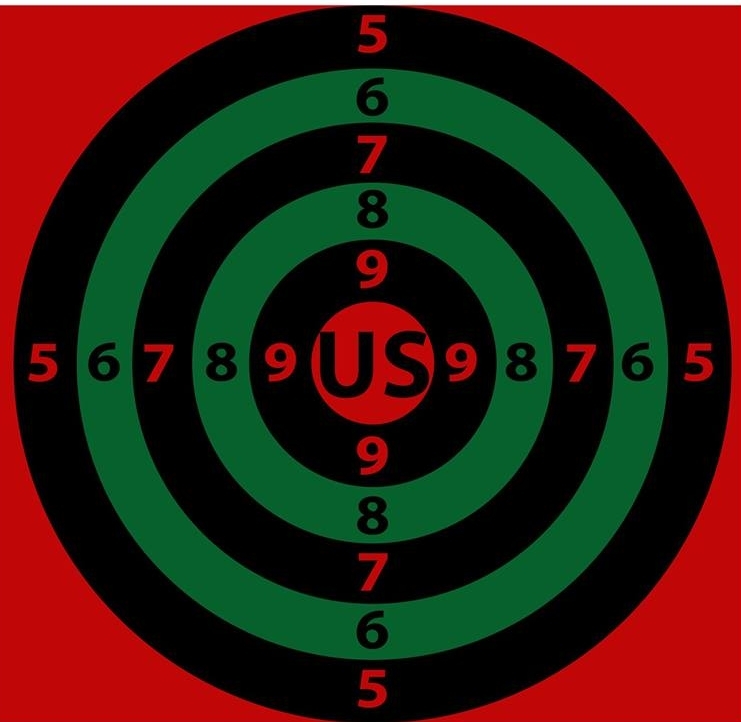 After scanning the paintings at the opening of Serron Green’s exhibit “U.S. vs. US,” I reached the installation piece and felt myself jump back a little bit. A man stood menacingly behind various shadows and ropes. He was dressed as a cop with a KKK mask over his head. It took me a second to realize that it was a just mannequin.

That kind of physical fear is an important aspect of Serron’s work. “U.S. vs US” was a recent pop-up exhibit at Index Art Center downtown Newark where the pieces questioned the logistics of political safety. Paintings of iconic black figures from the 1970’s lined the walls in pop-art style. Targets were everywhere. The colors of the American flag co-existed with those of the Pan-African flag, without mixing together. The overtly symbolized oppressor was kept behind their own gate while the rest of the space was left to openly grapple with race and gender. Serron told me that he wanted to put these pieces up for the Fourth of July this year on purpose—to make people think about what it means to celebrate America.

The installation piece is especially critical of that kind of patriotic pride. The creepy cop exposes the racist foundation of American policing. Placing a red, white, and blue KKK hood forced viewers to reckon with that system’s role in creating fear through targeted killings. It mirrors the history of American lynching in that it’s not necessarily about mass genocide, but rather public executions that induce fear in black people’s everyday lives. Serron’s friend Erika Hicks (@milele_atelier) actually sewed the hood together with the help of a YouTube video recorded by a woman in the south who has been making KKK hoods for years. The YouTuber’s location wasn’t disclosed, but the availability of this contemporary how-to highlights how these deeply rooted traditions adapt to contemporary culture.

The ropes and police barricades in the installation also have authentic origins. The ropes came from an abandoned movie theater in Newark. You can guess where the barricades came from. How these items have been repurposed is complicated by their origins. The twelve ropes are adapted from one form of entertainment to another—holding up a movie screen to holding up (missing) lynched bodies. On the barricades, “Newark Police” is crossed out in spray-paint and altered to say, instead, “FUCK THE Police.” Even more curious, there is a cross behind the cop figure made of police signs. I had to wonder if the cop was also some kind of twisted Jesus figure, detached from the crucifix.

It was especially grim to consider the ways this KKK cop was protected by the same things that threaten the people in the paintings. He was physically protected by street blockades. His personal identity was protected by the hood and uniform. He didn’t even need to have a gun in the holster. By simply being in a gallery, he was also physically inaccessible and protected from being touched. Those protective measures reveal another kind of fear: fear of revolution. Stripped of control, the cop is kept behind barricades, kind of like a caged animal.

To counter everything going on in the installation piece, many of the paintings looked to well-known revolutionaries. Bright, tripled images of figures like Tupac, Malcolm X, Huey Newton, and Pam Grier created a real sense of movement. Serron said that he was interested in memorializing people from recent history. He mentioned that in the same way that, say, Tupac references Huey Newton in his raps, these paintings remind viewers to think of both figures. At the opening, for example, a man from Spain didn’t recognize or know who Newton was—the exhibit afforded him the opportunity to do some research.

The problem of hyper-visibility versus invisibility of blackness was further emphasized through the use of purposefully placed targets. One large target resembled a dartboard, which problematized the pastime of playing games with life and death as a basement hobby. The targets positioned over Tupac and Malcolm X paintings appeared related to their defensive violence. Tupac was spitting at cameras following him to his car; Malcolm X was standing at a window with a rifle in his hand. In these pieces, they each had targets painted on their chests. That twist on two infamous photos shows how their legacies are situated between being both considered threatening and constantly threatened.

Though this exhibit was only up for a week, the overarching message transcended the physical display. Engaging with the work and message of people featured is in the exhibit is a way to pay back these martyrs. Honoring them also means supporting contemporary artists who are keeping the discourse about the value of black life in America alive. Tragic news headlines confront us every week, but it’s up to us to remember them.

Newark Black Film Festival winners will be honored at a free screening August...