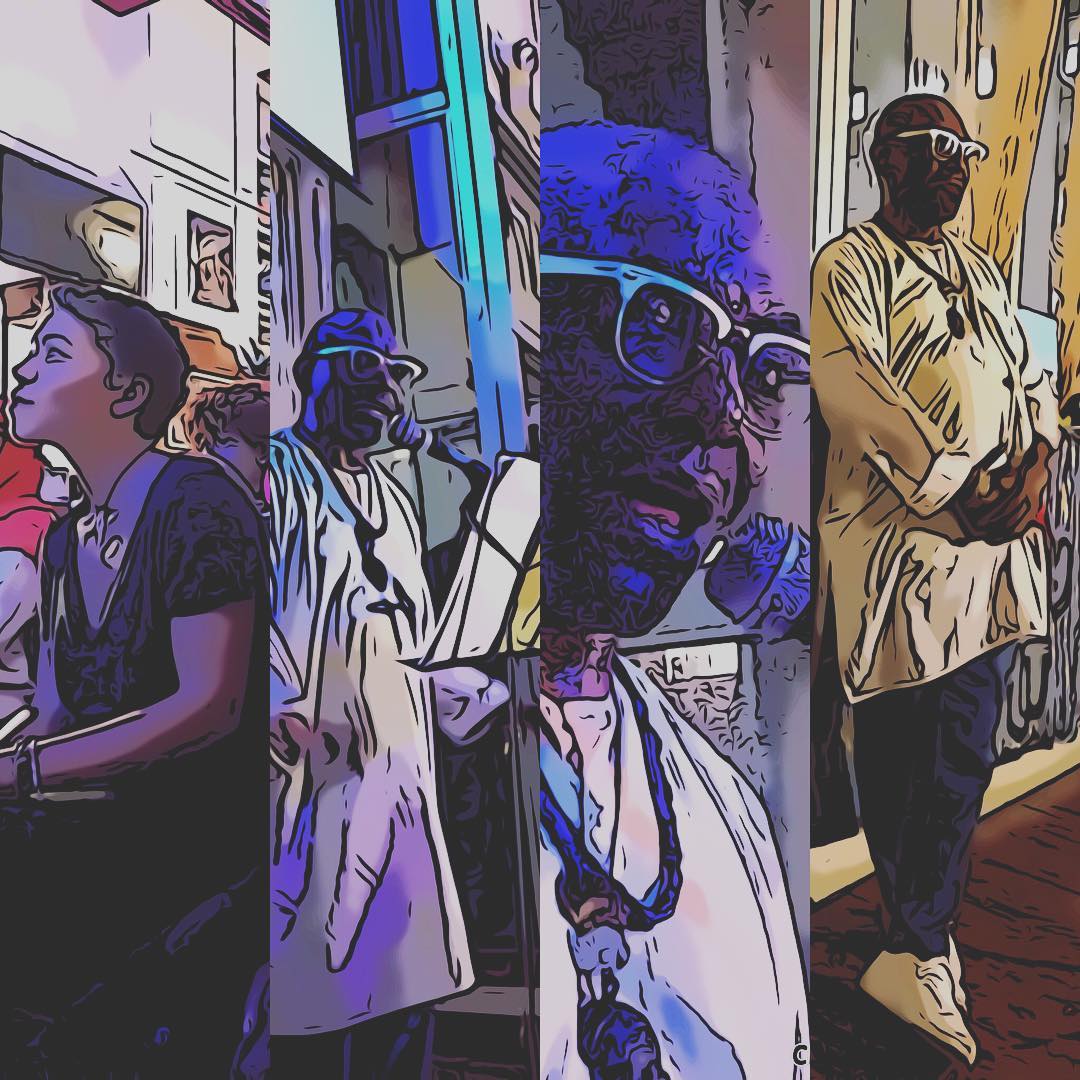 Everyone was asking about Jerry. Is he here? Did he go inside yet? Did he perform already? Where is he? These questions were hurled at and around me while I was standing outside of Mocha Lounge (17 Academy Street, Newark) with my son and a handful other people. The café was packed for a 360 Poetry Night event featuring Jerry Gant. At first, I thought I didn’t know who he was, but it turned out I was familiar with his work.

Gant is a multimedia artist from Newark, and his work punctuates the city. In the Central Ward alone, Gant’s work is featured on an oil tank on Halsey Street, on the side of a building facing West Kinney, and in the form of open metal gates at Nat Turner Park. Painting (and therefore beautifying) a metal barrel transformed it into installation art, and not just a leftover organ of a building. A mural called “From Hardship to Fellowship” features four angelic Black figures singing. It is a distinct image on the corner of West Kinney and Washington Streets. That image is copied and pasted a few blocks away on a defunct building on Broad Street that is owned by the city. The pieces at Nat Turner Park are bright metal cutouts, which is what Gant has said in interviews is one of his favorite mediums. They feature words and people and instruments.

When Gant rose to perform this past Friday night downtown, the room quieted. A dreamy jazz tune played from the DJ booth upstairs. Those who were gathered outside went inside. Everyone settled into their seats. The mad dash to the door was heightened by the pouring rain that started after a few minutes. I stood in the doorway. The weather added a symbolic component to Gant’s work, which the host, Justice Rountree, noted after Gant finished. He was thinking what I was thinking: rain coming down outside on a warm night perfectly matched the essence of Gant’s poem.

That poem lasted about a half hour. It floated from the personal to the social at a steady pace. Gant read from handwritten words that included a story about time in jail sharing food with a man who didn’t seem to have anything. There was an accounting of what “some black boys” were and weren’t, in dialogue with various stereotypes. Some are not “culturally anorexic” or “40 ouncing.” He pivoted to the things “we” are (“furious flowers”) and are not (“dying”). It was then that Gant circled back to a conversation in prison about the history of cotton clothing (that Black enslaved people picked it but didn’t get to wear it) by adding, “We are modeling handpicked cotton for all the forgotten tales of genocides.”

Gant pivoted to reciting a litany of names. This poem, he said, was “a name poem,” and he proceeded to call out people who “we are,” like Nat Turner, Basquiat, and 50 Cent. He repeated Kanye West’s name multiple times before a verbal question mark, which everyone liked. That section of the poem matches a staircase adjacent to the track in Nat Turner Park. There are tiles spread along each step, creating a mosaic of dozens of music artists’ names, from Led Zeppelin to Faith Evans. Listing names without context is used to break down barriers between genres, within both music and art. Near the end, Gant encouraged listeners to write their own “name poems.”

Some time was given after his set finished to people to stand up and make announcements about their businesses and events that are coming up. An open mic unfolded after that. There was poetry about Blackness, bodies, and domestic violence. Gant’s spoken word thus worked a lot like his physical pieces around the city, as a cultural checkpoint in an artistic space.

Glow Up: An outdoor silent party is coming to Newark this Friday
Scroll to top