With this summer’s completion of the new Prudential Tower downtown Newark, West Park Street is again drivable, the sidewalk across from Military Park is newly unobstructed by construction barriers, and 1,900 employees find themselves clocking into spanking new digs every morning.

For employees, the 20-story Prudential Tower is simply a new office. But there’s a little more to the tower than meets the eye in terms of its larger impact on the neighborhood says Richard Hummers, a Prudential executive who oversaw the project during the entirety its four-year arc from conception to completion. (The $444 million project received a nearly $211 million tax credit based on its estimated benefit as a job creation and retention engine in the area.)

“For us, building the new tower wasn’t just about solving a real estate and capacity problem,” Hummers said earlier this week, while sitting in a conference room at nearby Prudential Plaza alongside his colleague, Lata Reddy, vice president of corporate responsibility and president of the Prudential Foundation. Prudential Plaza remains the company’s headquarters, and is located two blocks south of its gleaming, translucent new cousin. 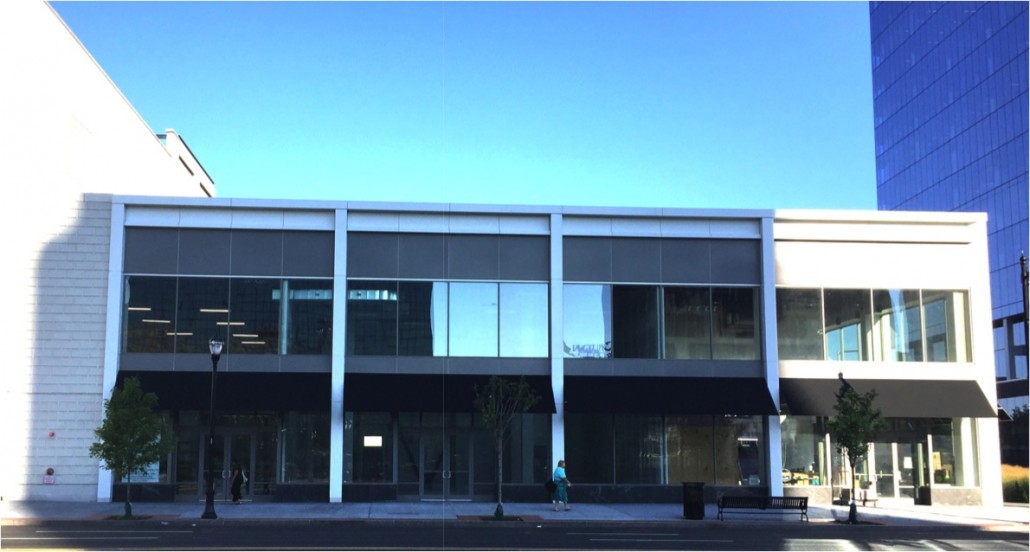 The “Shoppes on Broad” will feature street-level retail and restaurants.

Hummers said the project team also considered how the building site could fundamentally alter its surroundings. “We chose a site that could transform” its broader neighborhood in Newark, he said. Built on a long-blighted stretch of Broad Street, the new tower is positioned to do just that.

First, said Hummers, together with Prudential Plaza and a third Prudential building on Washington Street, the new tower creates something of a campus for its 6,000 Newark employees, but without being walled off from the rest of downtown. Hummers said “constant interaction” among Prudential employees in all three buildings creates more pedestrian traffic. That not only benefits businesses that are currently and soon-to-be located downtown, but also adds vibrancy to the neighborhood, he said.

The towers also add continuity along Broad Street. Together with the newly renovated Military Park and the in-progress renovation of the Hahnes building, both of which Prudential helped finance, the building addresses a significant gap in activated spaces along downtown Newark’s primary artery.

The project’s planners also added some architectural and design elements that consider the pedestrian experience. Prudential Tower features a parking deck that runs from Broad to Halsey Streets along New Street. Parking garages often make for imposing structures, but “the walk from Rutgers to Military Park shouldn’t feel like you’re passing through a dark cavern,” said Hummers. The solution: vertical green space lines the garage wall facing New Street by way of planters filled with greenery. “We wanted to make these spaces feel inviting,” Hummers explained. 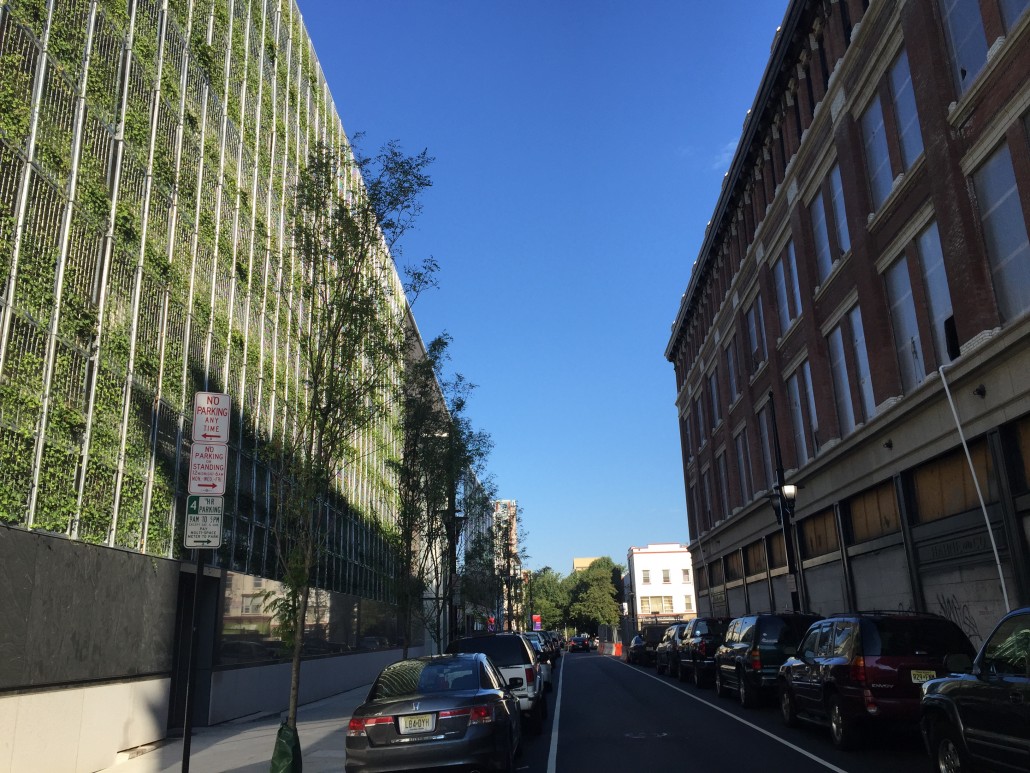 Planters line the parking garage exterior along New Street. Across the street, the Hahne’s building under construction.

The same goal animated the developers’ decision to install a “green wall” standing 55 feet high on the opposite side of the garage. The varying shades of the plants that comprise the wall, which architecture firm Kohn Pedersen Fox Associates designed, form a mural inspired by the lower righthand section of Prudential’s “Rock of Gibralter” logo.

Unlike the Hahne’s building, which will be mixed-use, Prudential’s new building is strictly an office tower, intended for its employees and for company-sponsored events. And it is those employees, said Reddy, who will be the primary vectors of the company’s interaction with its broader neighborhood.

Some of those interactions will be organized by Prudential, as with a recent youth-geared community service outing to Military Park.

But on a day-to-day basis, both Reddy and Hummers said, they’ll involve employees’ engagement with area social life and businesses, and vice versa. 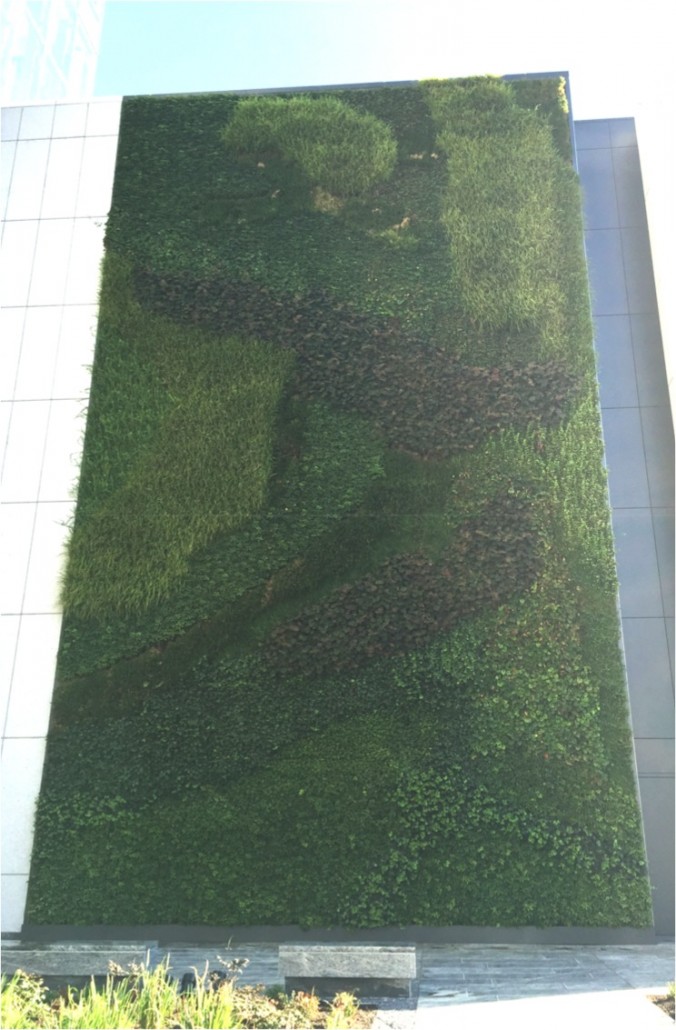 To help facilitate this, Prudential invited owners and managers from neighborhood restaurants, including Burger Walla, Nico, Dinosaur Barbecue, Duke’s Southern Table, Green Chicpea and BURG, the new burger and beer restaurant soon to launch in Military Park, to a “Community Partners Reception” and tasting on the building’s rooftop in early August. And while the tower’s construction caused a significant tightening of foot traffic along the north Halsey Street corridor, businesses are already seeing a surge in customers now that Prudential employees have moved in. All told, the building can accommodate up to 3,000 employees.

The “Shoppes on Broad” surrounding the towers will also be key locations of broader community interaction with the development. The shops will essentially extend the project onto the street level, and offer pedestrians retail and food options including a Blaze Pizza franchise and a reported Nike Factory store.

Taken together, these elements represent an “affirmative and intentional” push by the company to embed and integrate itself into its new neighborhood.

Prudential is planning a grand opening for the new towers on September 29th. Prudential Tower is located at 655 Broad Street in Newark.