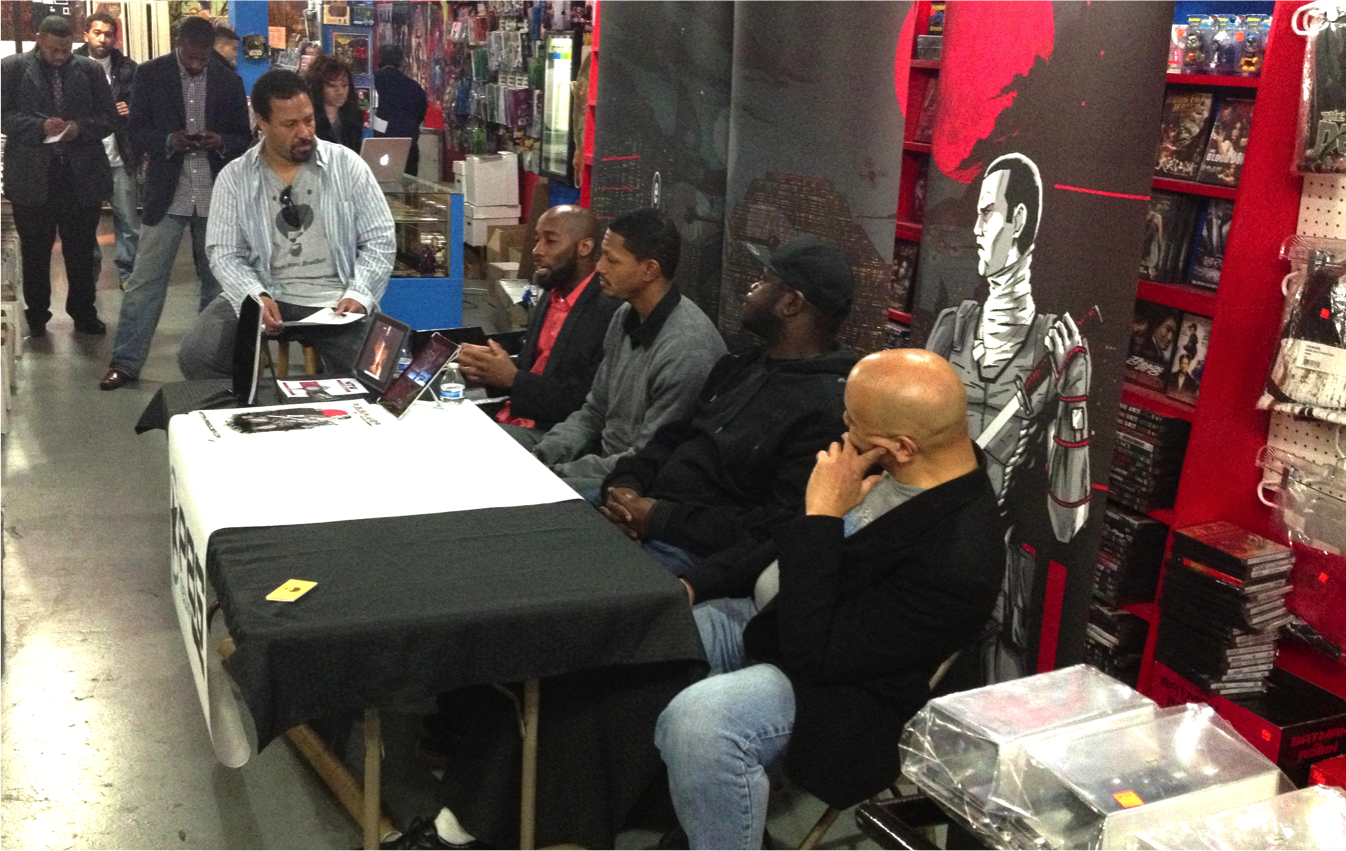 Kat Calvin of Blerdology and Geek Soul Brother hosted “Sci-Fi Art: Branding and Expanding in the Digital World”,  a comic book-themed branding forum held yesterday at Fortress of Solitude comic book store in Newark. The panel was part of the Newark Tech Week series of events that kicked off with TedXBroadStreet this past weekend.

The panelists were P.B. Soldier comic book creators Naseed Gifted and Dilettante Bass, who is also running for South Ward city council, Anthony Frasier, co-founder of both The Phat Startup and The Koalition gaming review site, and Darrell Goza, owner of Goza Creative/ScriptGraphics. There were about 20 attendees, nearly half of whom raised their hands when asked if they were trying to break into the genre.

Although the forum centered on the comic book industry, the entrepreneurs offered universally relevant advice about starting up and staying up. Here’s some of what they said:

Goza said that when the digital age swept in, sales of physical comic books started to drop off significantly. Where some might have acted defensively in the face of that change (as the music industry is often accused of doing by not embracing digital formats early enough), comic book aggregator comiXology chose to take advantage of it by using the best elements of new technology to enhance the comic buying and reading experience.

Be the change you want to see

Gifted took his son to see The Incredible Hulk a few years ago, and afterwards asked him what his favorite superheroes were. His son didn’t name any ethnic characters. Creating a hero of color for his son’s generation was one of the inspirations for P.B. Soldiers. The lesson: although entrepreneurs should avoid creating products only for themselves, thinking about the deficits in your own experiences can be a great jumping off point for discovering which products and services a broader base of consumers might like.

Be the success you’ve already seen

Bass said it’s alright to use what he called the “cut and paste” technique. “When you want to break in, talk to other people to learn how to succeed,” Bass said. Without studying what others have done, he added, “you can be wasting a lot of money on useless things that don’t even matter”. He also recommended attending industry trade shows – ComicCon for the comic book and graphic novel industry – to do competitive research, and also to find independent vendors who can help you get to market less expensively, and who can be great potential partners.  The other question this type of research will help you answer: Is this really what I want to do?

Frasier recounted the story of Kevin Grevioux, creator of the I, Frankenstein graphic novel. He’d originally written a script for the story and shopped it around, but couldn’t find a buyer. So he turned it into a graphic novel, which turned out to be an even better way to present the vision for the film than a classic script. The result, he sold the screenplay back in 2010, and the movie, starring Aaron Eckhart, will be released next year.

Bass said that sometimes a business can benefit from creating a movement around itself, which can help pull consumers into the company’s orbit. The P.B. Soldiers team decided to create a skateboard tournament and infuse it with the aesthetic from their graphic novel. In doing so, they were able to promote the project and connect it to a real life subculture that resonates with their potential fan base.

There are Newark Tech Week events through the end of the week. Twitter users, follow @buildbrickcity for live updates from the events. Via newarktechweek.com:

Darrin Sharif makes his pitch to be mayor of Newark