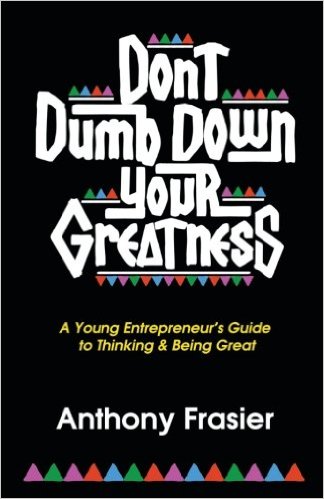 The book is now available on Amazon.com.

Anthony Frasier, the Newark-bred tech entrepreneur who has started successful companies in the tech and media space, had his work widely reported on, and has helped incubate a burgeoning tech community here in town, released his self-published book, Don’t Dumb Down Your Greatness, in paperback and for Kindle yesterday.

“I’m going to give you the advice I wish someone would have given me when I first started out,” Frasier promises. “When I learned each of these skills I became a better entrepreneur, but most of all a better person.”

The efficiently-etched volume (it clocks in at 94 pages), whose cover is a callback to the movie poster for Spike Lee’s classic Do The Right Thing, is aimed at “young entrepreneurs of color [who] aren’t getting good advice,” according to the book’s description. He’s spent several years curating entrepreneurship advice for this exact community under the banner of The Phat Startup, the entrepreneurship education and media company he cofounded.

For instance, entrepreneurs are routinely advised to look first to their personal connections to raise money for their ventures – the “friends and family round” of funding – even when a rich uncle is not at hand for all, or to seek venture capital funding even when they often lack the connections or cultural capital to do this easily. Frasier understand these built-in limitations well, and promises to address them head-on in his book with both research and anecdotes from his own journey as an entrepreneur, and to offer affirmative advice that will help would-be entrepreneurs advance their startup goals.

Frasier recently told BrickCityLive.com that he will be coming to Newark to interface with the public about his new book. Stay tuned for more on his plans as they develop.

Frasier previously co-authored How to Grind Like Diddy with James Lopez, who is a Phat Startup cofounder.

Don’t Dumb Down Your Greatness is available on Amazon.com.