On a recent Monday in Newark, dozens of family and friends of Newark Central High School’s varsity basketball team, which recently won its first sectional title since 2011, converged on Citiplex12 to see themselves hit the big screen. The popcorn was free, the soft drinks were flowing, and the energy was high as the student athletes hit the red carpet to recap an excellent season, take pictures, and mingle with media and a production team from YouTube.

The premiere served as a first look at the Michael John Warren-directed docuseries Best Shot which is scheduled to begin streaming on the NBA’s YouTube channel July 18th,  follows the team and its dynamic head coach, Shawn McCray. McCray is better known throughout the community as “Coach O.G.” of the Zoo Crew Basketball League on Springfield Avenue. Executive produced by LeBron James’s production company, Springhill Entertainment, the one hour-per-episode, eight-part series also features former Duke University star and NBA player, Jay Williams, who is most known for winning a national championship at Duke in 2001.

Williams, who is from Plainfield, and who played high school basketball at St. Joseph’s in Metuchen, serves as a mentor for the Central team on their quest to leave a championship banner hanging in their home gym and be remembered as state champions. Williams said at the premiere that the documentary was a life-changing experience for himself and the kids, as the YouTube team was given wide access to the players, their families, their coaches, and Williams himself. “Every time I went to a practice, or a game, I felt rejuvenated, I felt alive. And I just want to say thank you to Coach, and all you boys—you guys have forever changed me as a man,” Williams said.

Because of trials in his own life, Williams is able to speak to the young players with authenticity about life’s ups and downs. Williams had been the second overall NBA draft selection by the Chicago Bulls in 2002, but his professional basketball career ended tragically in 2003, when a bad motorcycle accident that left him in critical condition precipitated his being waived from the team.  Williams, who is now an ESPN sports analyst, said it’s a moment that still remains present with him.

“Nothing will be easy from this point,” he told the players on premiere night. “But you have Coach McCray, you have amazing family members, and you have a community around you. Utilize that community as a launching pad to get where you want to be.”

According to a Nightline special about the documentary, producers considered several New York-area high schools for the series but chose Central High largely on the strength of McCray’s background, in particular his activism and the struggles he overcame that help him relate to his players. For Coach McCray, the night was a triumph. He appeared joyous as he spoke to a crowd of family, friends, and supporters before the screening got underway. The production team from YouTube also presented him with a surprise gift—a new school bus for his players. McCray has been known locally to give his players rides home after practice to ensure they were safe. 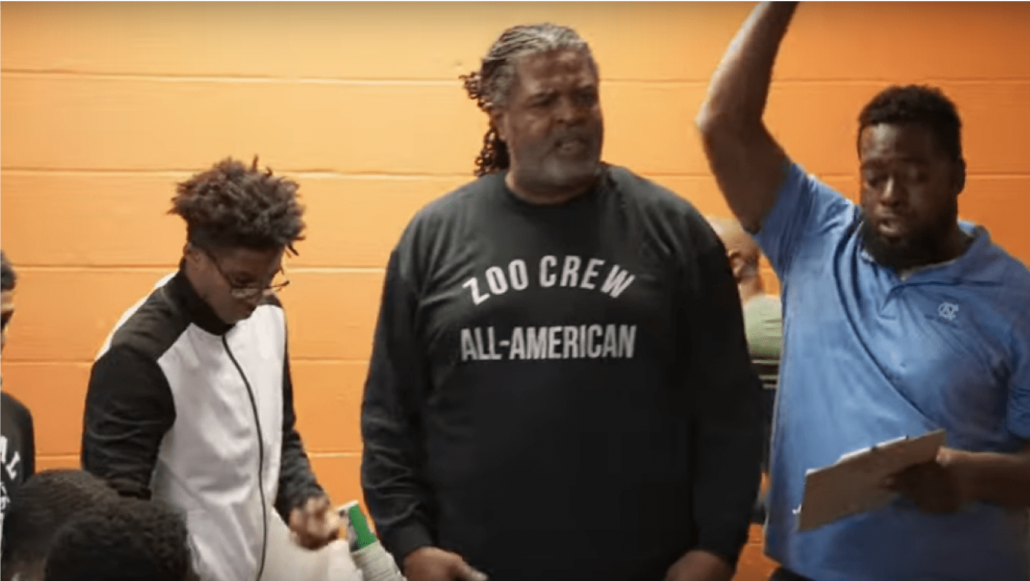 McCray remarked that his team this year is comprised of a great group of kids, which not only made for a powerful story, but also provided a small dose of relief.

“This might be the first time I could go to sleep and not worry about where guys are or what they’re doing. I just want to let the parents know that you guys are doing a great job with this group of kids,” McCray said. He then cautioned: “But we still have to stay on them, because there are a lot of pitfalls out here, and I feel it’s my job to keep them from that.”

Despite recently losing his run-off election in Newark’s Central Ward municipal council race to LaMonica McIver on June 12th, McCray has been a highly respected member of the community and is a recognizable face for many Newarkers. “Best Shot” leverages the work Coach O.G. has done for Newark youth–day-by-day, year-in and year-out–to fashion a moving narrative that is still rooted in the realities of everyday life. The cameras capture the lives of Central players as they battle peer pressure, try to make the team and lift their GPAs, and even face the consequences of bad decisions and having to deal directly with law enforcement.

Only the first episode, and about 20 minutes of the second episode, were unveiled during the premiere. McCray himself has only seen the first three, and will join the rest of the viewing audience to see how his team’s story is ultimately unspooled for the masses.

Born and raised in Newark’s Lincoln Park District. Jarrett Adams is a University of Maryland graduate who came back to Newark in 2014 to pursue a career in journalism. He now spend his time deeply invested in Newark’ communities, arts, nightlife and culture. When he is not too busy he writes as Newark’s cultural writer for BrickCityLive.com.

The Newark Historical Renaissance Ride is back and dressed in seersucker