Who shot ya? Legendary photographer looks back on a bygone club era in Newark 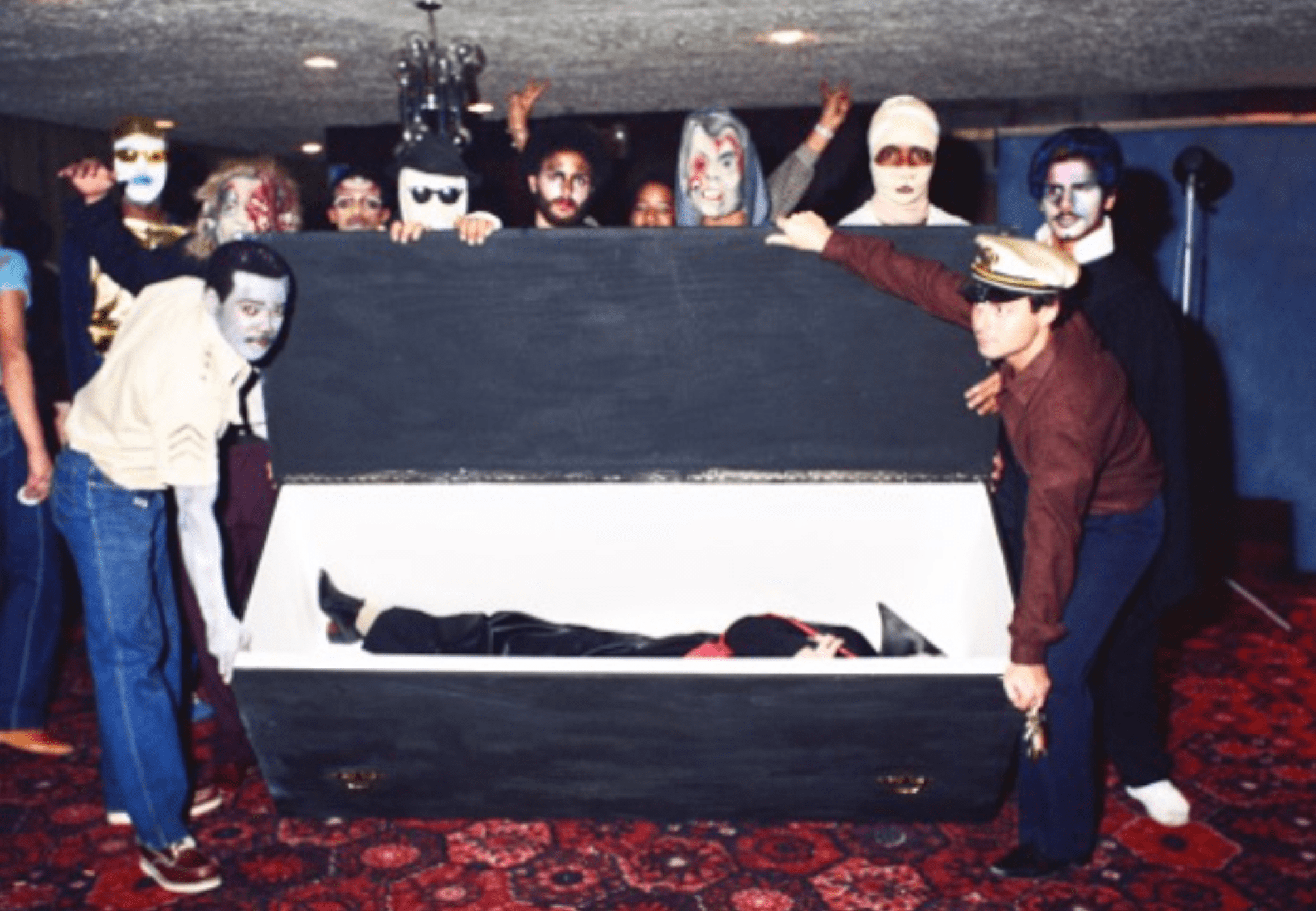 One Halloween, the DJ at Zanzibar showed up to the club in a casket. Photo by Vincent Bryant

Celebrating the fourth anniversary of the publication of his photo book A Journey Through the House, Vincent Bryant gears up to release an updated version of the book that gives viewers a glimpse into what it was like to work inside Newark’s notorious nightspot, Club Zanzibar, in its heyday. Opened in 1979 inside the defunct Lincoln Motel at 403 Broad Street in downtown Newark, Club Zanzibar drew an eclectic crowd of thousands of party goers and a coterie of legendary entertainers, including Grace Jones, Sylvester, Chaka Khan, and the late Phyllis Hyman. Legendary DJs including Larry Levan, Tony Humprhies, and Merl Bob spun House music classics at the Zanzibar and helped to popularize the Jersey House music sound. Brick City Live’s Kenneth Miles interviewed Bryant and took at look back at an historic moment in Newark.

No one wanted to come to Newark in the early 80’s because the city still didn’t come back from the riots. Everybody used to go to the bars, because bars were the thing.

Most photographers had their own house, so you would go to their house to shoot, but the Zanzibar was a whole new thing. What made it good was that you had to get dressed in the latest fashions. It brought excitement to the city. Entertainers, sports figures–you might find just about anybody in the Zanzibar, because it was that kind of place.

I met the owner of the Zanzibar one evening when I went to see if I could be a photographer there. Miles Berger [Club Zanzibar owner] introduced me to a guy named Al Murphy, who was the manager of the club. My first night was New Year’s night, [and Berger] called me up and asked me ‘Do you still want to be the house photographer?’ I said yes. He asked me, “How much do you charge for your pictures?”’ Back then we were doing Polaroid shots, so I told him $3 dollars. [Berger] told me that my prices were too low and to raise my prices. So I sat my [camera] in the lobby of the hotel doing Polaroid shots New Year’s Eve 1979 going into 1980. This club had a dance floor, speakers and an awesome sound system which really made it great. I shot photographs all night. 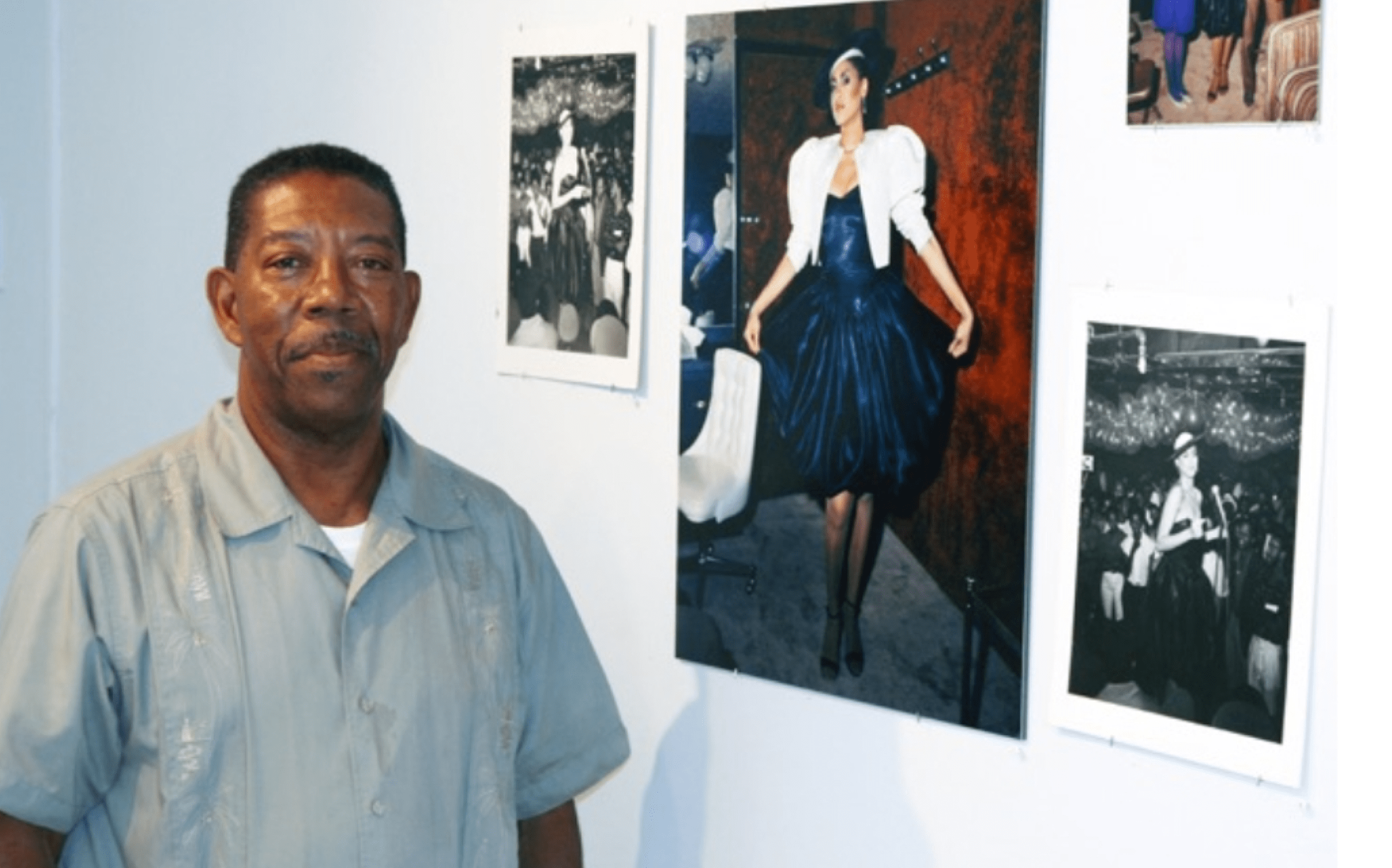 The owners of the club were close to the people at The Paradise Garage. The two clubs had the same sound systems. Richard Long was the one who made the sound system. It was two of a kind: one in Newark and one in New York.

You would find the people would slip into the Zanzibar who didn’t want you to know that they were in there. The speakers were six feet high. Way back in the day the club used to have go-go guys that used to dance. After work, people would come in straight from work. It was for women only, a girls’ night out. These guys made a living dancing. The managers would lock the doors, and by the times guys came in the girls were ready [laughs]. It started at 4 o’clock on Friday and it ran all night. The guy who ran the place, Al Murphy, was a genius at putting parties together. He always had a theme each night and people would dress for the theme.

Halloween is coming up now, and Halloween was big at the Zanzibar. Everybody wore costumes. One Halloween night, the club DJ came into the club in a casket. I mean it was wild! You come into the club, there was a big cage that had snakes in them. They gave away fruit…they always gave away something. It was just a wild party. I remember when I used to come up to the club at 9 o’clock there used to be a line wrapped around the club. When they got the place filled, people would still stand online to wait for somebody to come out.

When Patti LaBelle came to the Zanzibar it made it in Jet magazine. It was a big deal. People used to come to the [Zanzibar] from Washington to Boston. What made the club unique was that it was in the Lincoln hotel. The hotel used to be full from Friday night until Sunday. People would come for the weekend and stay at the hotel. When you came to Newark you knew about the Zanzibar. Sylvester would come to the Zanzibar. The club eventually developed a gay night. On a Wednesday night you would see almost two thousand people in there. A lot of people thought of the [Zanzibar] as a sanctuary because no one would bother them. Nobody cared if they were gay or if they came in there with their partner. They danced and nobody said anything to them, so they felt safe.

I haven’t been in the [club] scene for quite a while. When Al Murphy died things started to change. Miles Berger is the owner of the Robert Treat hotel now. I’m very close with him. I’m close with the family. He bought more of my pictures than anybody. A lot of photographers have asked me how I got to be a celebrity photographer, and I tell them to take pictures of celebrities–that’s what makes you a celebrity photographer. Your clientele makes you who you are.

If you want to make money as a photographer, you have to present yourself as a businessman. I’ve taken pictures of diplomats, mayors and have been all over Africa.

The photographers who make the big money go to the big events. When I covered the Governors Ball it was tuxedo-only, including the photographers. I should show up to your event respectful. I learned that from my grandfather, who told me that when you wear jeans they are going to treat you like a worker, but if you dress up they will treat you with respect.

When Phyllis [Hyman] came to the Zanzibar the show was sold out. You could not get into the club.

Phyllis was phenomenal! She was a sweetheart. When I photographed her I got a chance to get to know her. She had this magnetism about her. It was only two other people that I have ever met like her. She had the type of personality that would just draw people around her.

The last time I met miss Phyllis, before she committed suicide, I was in Jersey City. She was doing a show over there. I set up [my equipment, and] when Phyllis came in she said, ‘Oh, Vincent! I didn’t know you were here.’ She [told management] that night ‘This is the only guy that can take pictures of me.’ She was on Broadway and she was doing good. That night she did the show, I went backstage in the dressing room with her, and she told me, ‘I can’t remember my music. I can’t remember my song.’ She still went out on stage and people called for an encore. I had went out in the lobby, because I was trying to make money, she said, ‘Vincent, you take real good care of yourself.’ She looked at me and I looked at her. I thought it was strange. I said ‘You take care of yourself.’ A few weeks later she committed suicide. I guess she had depression and we didn’t know it.

You couldn’t get in the Zanzibar when Sylvester played. He would do two shows, Friday night and Saturday night. Sylvester used to buy all of my pictures.

The thing that is shocking is that I used to go to church right after I would leave the Zanzibar. I’m a church boy. I remember one night I was waiting to do a show–it was around 3 in the morning. [Sylvester] said that he was exhausted after just coming back from Europe. He said that he was working hard. I said that I would be glad when the show was over, because I had to get up and go to church. [Sylvester] said, ‘Do you mind if I go to church with you?’ I was so stunned, but he didn’t go.

Two Tons O’ Fun used to be the backup for Sylvester, but one of the singers’ husbands hated Sylvester so they were never on the same side when they got ready to do a show. They had separate dressing rooms on the opposite end. After that show, we went over to East New York to a restaurant. I had a Volkswagen. Two Tons O’ Fun said ‘We’re going to eat after the show.’ I said ‘What are you talking about?’ They said ‘You’re going to take us to eat.’ So I put [Martha Wash] in my Volkswagen, because I couldn’t get both of them in there, and so we rode over from Newark to East New York and had breakfast. We were crazy back then.

There Will Never Be Another

Loleatta Holloway used to have her son with her. One of the years of the Lincoln Park Festival they invited Loleatta Holloway back and I presented her the picture that I took of her and her son [back in the Zanzibar]. Her son was dressed in a tuxedo. She said, “Oh my God! How did you keep this photo so many years.’ I have a picture of her son when he was a little kid and she used to drag him around. Loleatta Holloway loved Newark–she practically stayed at the Zanzibar when she came to the Newark area. She told everyone before she died that she loved Newark.

Most of the people are gone now. What made this era so different was the music. The kind of music that they play now, can you dance off it? The sounds and the music meant something [back in the day]. That era is gone. I was blessed to be a part of it.

They tried to [duplicate the success] of the Zanzibar, but people started shooting. The rap guys came in. It was a whole different kind of people. The rap concerts got so bad that nobody wanted to do them. That was a downfall in music. Kurtis Blow said to me, ‘I want you to be my photographer. You will make a lot of money.’ I said, ‘No. I’d get killed!’

What makes this book unique is that I did it with film. I had to go back and scan [my pictures]. I had no idea that I would [publish a book]. I just sort of took my negatives and threw them in a box. Years later, executives from Lincoln Park came to me and asked me to do an exhibit at City Without Walls. People came to me and they were crying, because they didn’t know that I had these pictures. I had the same pictures that I had in the book on the wall. People came up to me with tears in their eyes, because they didn’t know that I had all of these photos from so many years ago.

For more information on A Journey Through the House, visit vincentbryantunforgettablemoments.com.

Up Next in Newark
sponsored by

For the ‘Gram: Your 9 must-do Newark Arts Festival snaps
Scroll to top