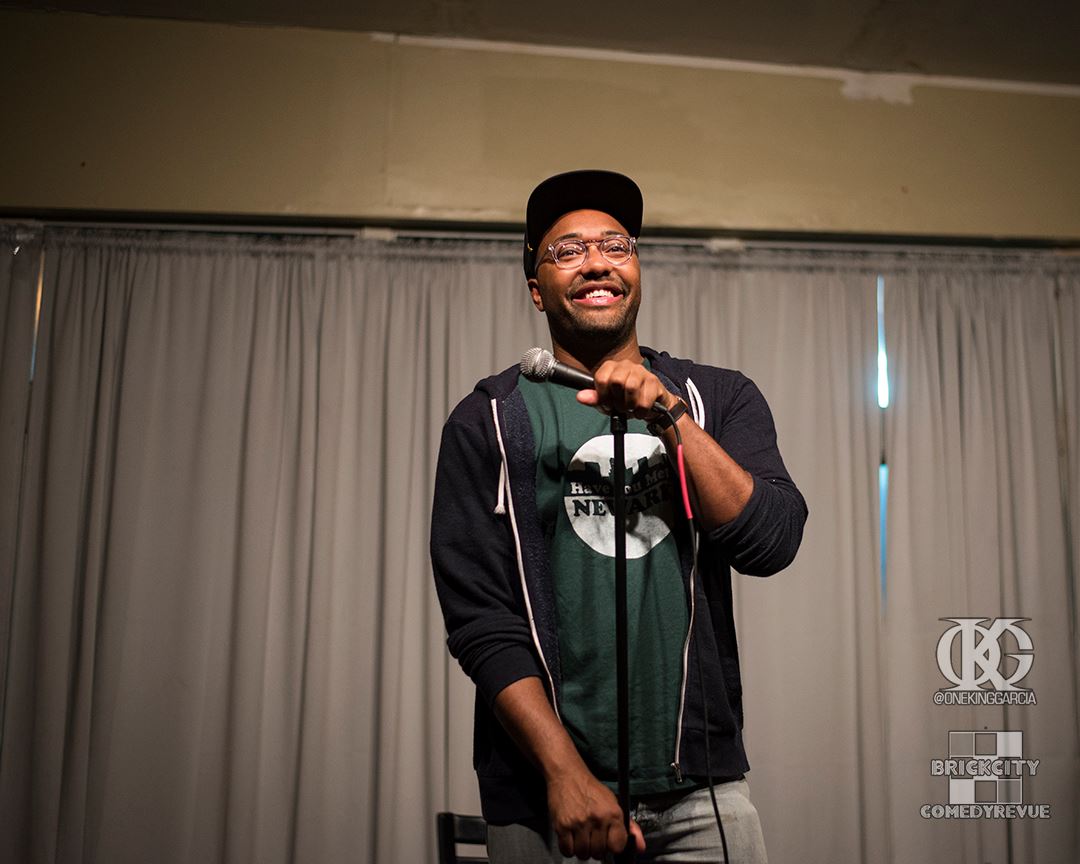 Justin Williams at Kilkenny Alehouse, where he hosts Brick City Comedy Revue every fourth Thursday of the month. Photo by King Garcia.

For many people, life in 2018 is no laughing matter.

Whether it is the circus-like political atmosphere enveloping our national government and the whirlwind of information bombarding the public along with it, or equally important social matters that hit closer to home, an all-too sizable portion of the population finds itself living in a heightened state of anxiety. Watchful. On edge. Hoping for the best, fearing the worst.

People are worried. Even afraid.

So naturally, it’s the best time to laugh.

The English poet and playwright Christopher Fry once stated, “Comedy is an escape, not from truth but from despair; a narrow escape into faith.” Indeed, there may be few better ways to ease tension during tumultuous times than walking into a neighborhood bar, sitting in a folding chair, staring up at a microphone stand centered on a spotlighted stage, listening to the words of the person holding the mic, and laughing.

In Downtown Newark, Justin Williams has been an orchestrator of this age-old form of communal, entertainment-based therapy, as producer and host of the Brick City Comedy Revue series he co-founded with Steve Serra in 2014, which takes place on the fourth Thursday of every month at Kilkenny Alehouse on Central Ave. at Halsey St. In May, the show celebrated its four-year anniversary. After the anniversary show, Williams spoke to me about the importance of having this outlet.

“Comedy is really important in Newark, and America more broadly,” he told me. “It’s a good tool to cut through the misinformation and remind us that we don’t have to accept absurdity in real life.”

Audience member: “Trump must be great for comedy!”

Me: “It’s a terrifying balance of trying to entertain people, but not feel like I’m tap dancing during the end of the republic.”

Audience member: “Ok, you have a good night.”

With no shortage of absurdity in the world today, comedy, as it always has, allows for critical analysis of the most important and often polarizing issues of our time. National issues are often tackled, from the Trump presidency to racism, from Kanye West to police brutality, but the same can be applied to local matters, opening the door to unpack a range of topics specific to Newark and the surrounding areas.

“Newark is a great place for comedy,” Williams explained. “We’re diverse, but divided. We’re poor and working class, but also seeing an huge influx of new people and money into the city. We’re one of the most hated cities in America, but we’re also increasingly presented as a success story. Those contradictions make Newark a fun place to talk about, especially since it’s coming from a local point of view.”

Humor does keep the vibe from getting too heavy, but issues of crime, gentrification, and local politics clearly resonate with the receptive audience, one that Williams describes as “an interesting mix” of people.

“At any given show you can find young professionals and artists that are relatively new to Newark, people that were born and raised here, people from bordering towns like East Orange, Bloomfield and Maplewood. It’s a testament to the way Downtown Newark can help integrate this city and the universal nature of laugher.”

While there is no shortage of local comedic talent to recruit from, not all of the invited performers are from the immediate area. Williams noted that many comics come from New York, often to larger and more enthusiastic crowds than they are accustomed to seeing in the boroughs.

“Downtown Newark can be just as easy to get to as venues in Greenpoint, Park Slope, Harlem or Long Island City,” he notes. “So it’s not really hard to get established talent to come here.”

Whether the featured acts are established comics or newbies testing the performative waters, the Brick City Comedy Revue has proven to be a much-welcomed oasis among sandstorms of political and social frustration. An expertly entertaining host with a decade of stand-up experience under his belt (and that’s Dr. Justin Williams to you–the scholar-comic is also an Assistant Professor of History at City College of New York), Williams certainly knows how to squeeze every eager drop of escapism from his audience, and told me he intends to continue to do so for the foreseeable future.

“My plan is to keep growing the show and eventually open my own venue,” he declared.

If you do have $100,000 (though it’s probably ok if you don’t), the Brick City Comedy Revue invites you to kick off another year on Thursday, June 28, 2018 at 9pm at Kilkenny Alehouse at 27 Central Ave., Downtown Newark.

Manny Faces is an award-winning journalist, lecturer, podcaster and DJ. He is the founder of the online hip-hop publication Birthplace Magazine and a non-profit, The Center for Hip-Hop Advocacy, which works to increase public understanding of hip-hop culture. Manny also produces and hosts “News Beat,” a groundbreaking social justice podcast that blends hard-hitting journalism with music.