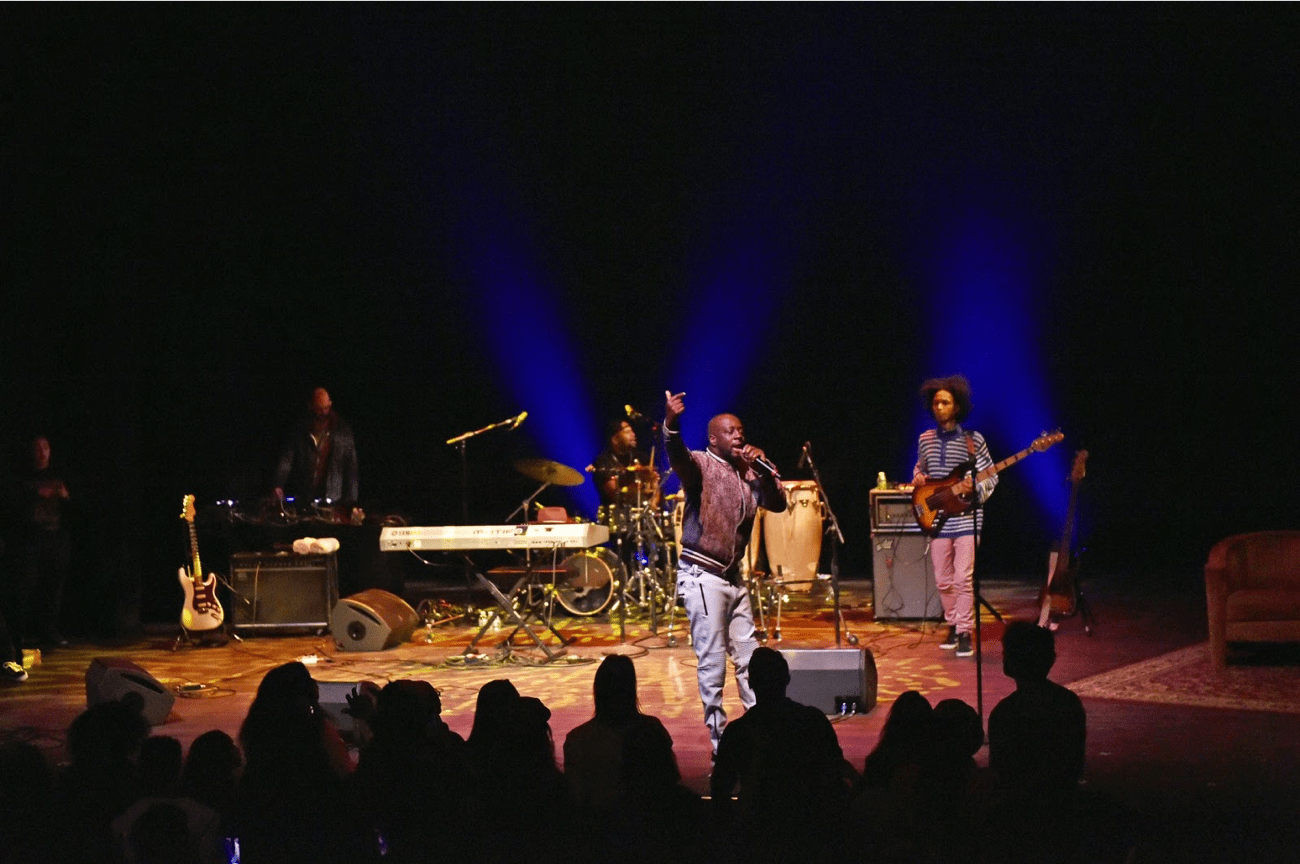 There was a “moment” near the conclusion of the one-on-one, on stage conversation between GRAMMY Museum Executive Director, Bob Santelli and musical polymath, Wyclef Jean.

What seemed like a nearly sold-out Victoria Theater at NJPAC had just witnessed a wide-ranging discussion about Jean’s upbringing, his musical inspirations and roots, production techniques, travels to distant lands, and collaborations with some of the world’s most acclaimed artists.

As part of “An Evening With Wyclef Jean,” the superstar would soon take the stage and unleash a barrage of cross-genre music from throughout his storied career, but first, he and Santelli, sitting “fireside chat” style in comfortable armchairs, fielded questions from the audience.

At one point, a young woman, high-school aged, spoke up.

“My question is about your ‘Wyclef Goes Back To School’ project…”

Jean had just finished speaking about this series of upcoming releases. “The whole concept about these projects will be discovery,” he had explained. “You’ll be getting 10 songs. The production’s going to be amazing. Half of the artists, you’ll know who they are. The other half will be college students and high school students that you’ve never heard of.”

The young woman continued. “Are you mainly… Are you going to start here in Newark?” she asked. “And what grade of high school are you looking for?”

Then, with an ever-so-slight injection of confident conviction, “‘Cuz I’m a singer!”

Realizing what this young lady was doing — courageously standing up and shooting her show biz shot to the man who produced the song that helped make Beyoncé, Beyoncé — many in attendance began clapping in support.

Without missing a beat, Wyclef waved to someone in the wings, then addressed the girl. “OK, real quick,” he said, motioning for her to leave her seat and approach the stage. “Bring your information and give it to my assistant…”

As the young lady, beaming, began to make her way to the stage to do just that, the crowd erupted with applause and cheers. 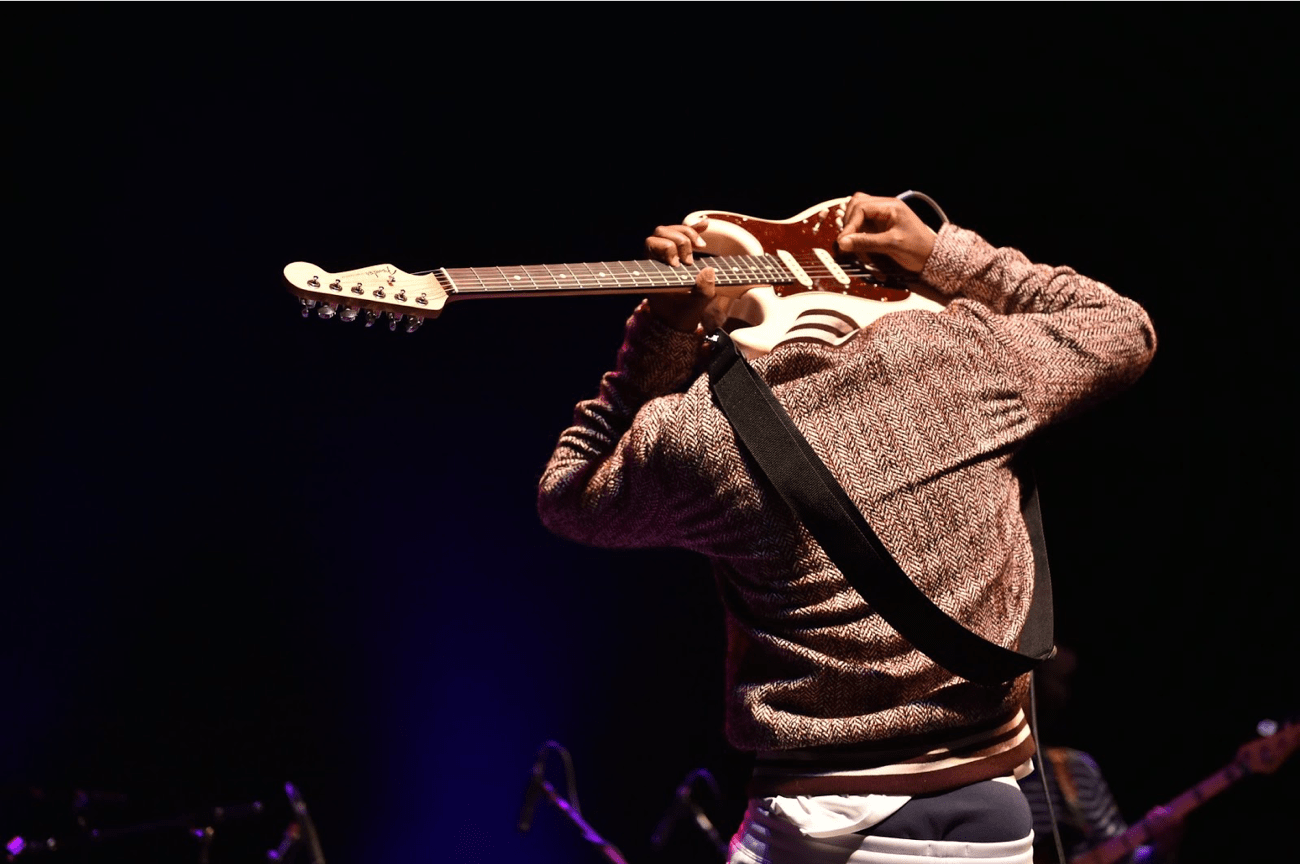 It was this moment which brought an already informative, entertaining experience with an internationally renowned superstar, back home. This was the moment when it felt like no matter the professional accolades, no matter the GRAMMY wins, no matter the status, Wyclef Jean was still down for his ‘hood.

And his ‘hood was here for it.

To Clef’s credit, this was no gimmick. The day prior, he was a guest of honor at the unveiling of a mural in his honor, in the Fairmount section of Newark’s West Ward. There, he not only spoke humbly and proudly about his Newark upbringing, but stayed for quite some time after the official event, speaking with residents, even trading rap verses with some local MCs. This, at least when he’s back home, seems to just be how he is.

It’s moments like these that Santelli wants to continue to help create. The following day at a preview event for the GRAMMY Museum Experience’s new Whitney! Exhibit, honoring another New Jersey icon, the late Whitney Houston, Santelli spoke to me about the feeling of being able to shine deserved light on a local icons like Houston and Jean, right here in Newark.

“Any time we can link someone from Jersey who had a dream and ultimately achieved it,” he said, “that’s the best kind of message you can send to young people.”

In Wyclef Jean, he found a perfect ambassador. An artist recognized the world over, Jean is perfectly comfortable in the role of hometown hero role model. His easygoing vibe was on full display during the conversation as he dropped gems about in-studio recording methods, recounted recording sessions with huge talents such as Michael Jackson and Whitney Houston, spoke about his time with The Fugees, and with his mother looking on, always found a way to tie it all back to the S. Orange Ave. home where it all began.

After the discussion — and the “moment” — had ended, Jean took to the stage and brought the audience on a musical journey through his decades-long career. Earlier, he relayed how he credited teachers at Vailsburg High School and the late poet Amiri Baraka (father of current Newark mayor, Ras Baraka) for opening his mind to the power of music by introducing him to jazz, and so it was jazz where he began, first on the keyboard, then on the guitar, backed by a bassist and a drummer. A DJ laid in the cut as well. He would later drop familiar hip-hop beats for Clef to spit classic bars over, reprising contributions to songs by The Fugees and his own acclaimed catalog. 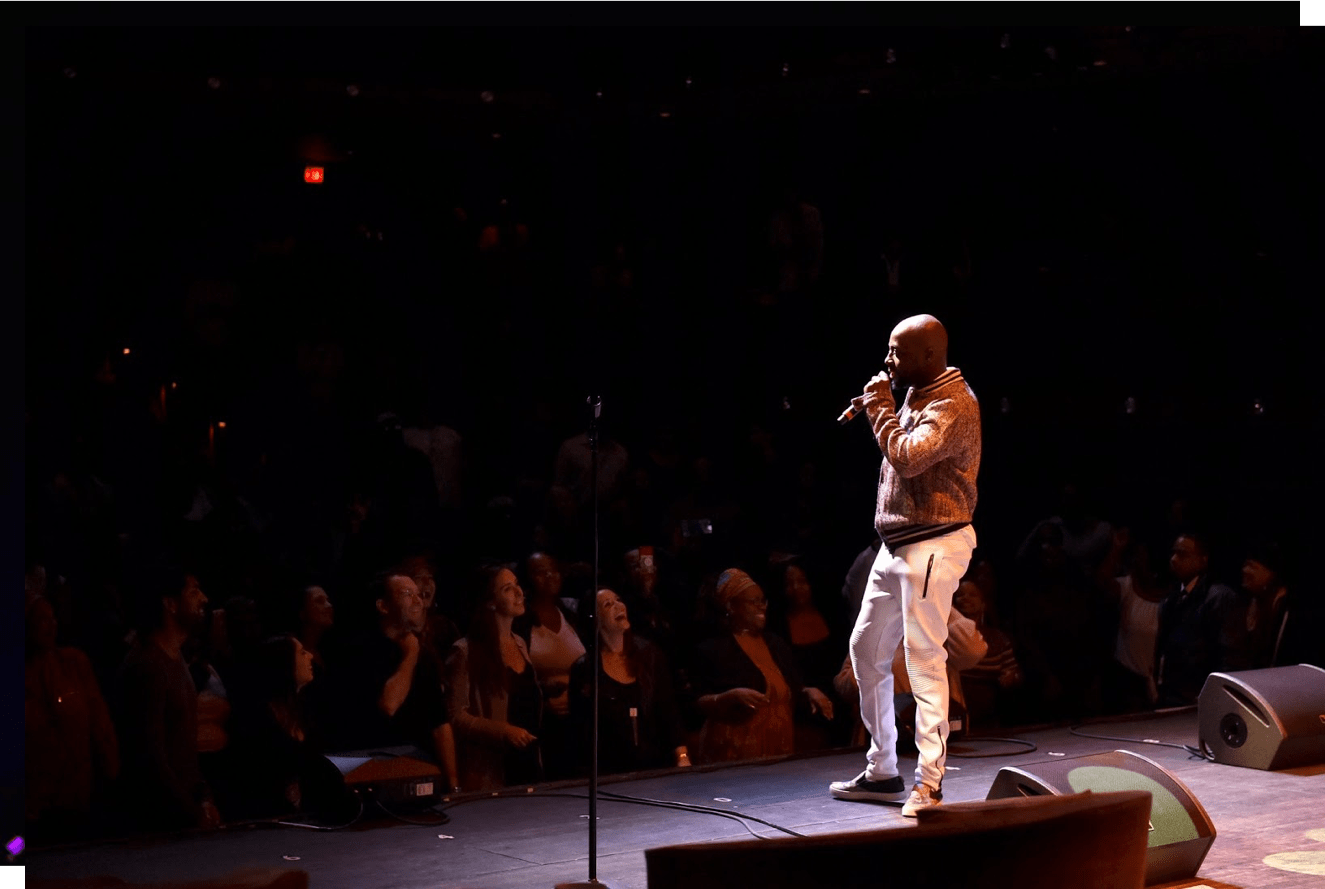 Wyclef engages the crowd in conversation during “An Evening With” at NJPAC. Photo courtesy Prudential Center

Like his life’s journey, Haiti is never far from Jean’s music, and after a rolicking rendition of what is perhaps his biggest hit, the Shakira powered “Hips Don’t Lie,” and a spicy guitar-fueled tribute to Carlos Santana’s contribution on “Maria, Maria” (and by extension, the DJ Khalid / Rihanna smash, “Wild Thoughts”), Wyclef Jean once again brought it back to his roots. First with a performance of his newest single, “Baba,” Swahili for “father,” a nod to geneology test results which place Clef’s ancestry firmly in Nigeria. Then, a Carnival-flavored explosion of dancing-in-the-aisles energy set off by “Lady Haiti,” from his 2017 album J’ouvert.

Overall, through intimate conversation and a whirlwind performance spanning multiple genres, Wyclef Jean took his fans, friends, family, and neighborhood on a winding journey, through his life, his career, and the world, yet still managed to keep everyone feeling right at home.

Nonprofit SHE Wins! to host father-daughter dance
Scroll to top