Locals can get their first glimpses of the newly restored mixed-use high rise building at 540 Broad Street in Newark, historically known as the New Jersey Bell Headquarters Building, with the launch today of the property’s teaser website.

The website, which features renderings of the completed project and iconography that recalls the Art Deco style of the building itself, also publicly reveals the name of the restored building for the first time: Walker House.

L+M Development Partners, the firm behind the restoration of the Hahne & Co. Building, purchased 540 Broad Street from Verizon in 2016 for $16.5 million and oversaw its $120 million renovation, which commenced in April of this year.

This initial reveal, said L+M Development Partners’ VP for Development, Jonathan Cortell, will set the tone for future marketing of the project to be run by New York-based The Marketing Directors, which is the exclusive marketing and leasing agent for the project. Consumers can expect that marketing to celebrate the building’s distinctive original architecture–it’s listed on the National Register of Historic Places–and highlight the care taken to restore the building’s historical elements during the buildout process. “Our resident and other community stakeholders will derive comfort, if not excitement, from knowing how much of a restoration project this is,” said Cortell.

Walker House will launch as a mixed-use development complete with 265 rental apartments, 15,000 square feet of ground floor retail spaces and 80,000 square feet of office space. Residential move-in is expected to begin in March of 2019. Already, 27,000 square feet of the building is leased by Verizon, and another 6,000 square feet will be leased by information technology training non-profit Per Scholas. The ground floor, said Cortell, will offer consumers “a mixed bag of experiences that are currently absent from market,” though no announcements have been made about which retailers will occupy the spaces.

For residents, the 21-story-high, 400,00-plus-square-foot building will feature a mix of studios and one-, two- and three-bedroom market rate apartments. While the project commenced before the passage of Newark’s inclusionary zoning law, and is thus exempt from having to offer affordable housing in exchange for the tax abatements it received, developers opted to voluntarily offer 20 percent affordable units anyway. The 54 affordable apartments will be offered to potential residents per a lottery process, applications for which close on Friday, November 16th. The building lobby, which features 20 foot ceilings, is being carefully restored to preserve its historical character and will be attended 24/7 when residents begin moving in.

Each residence will include in-home washers and dryers, stainless steel appliances, quartz countertops and tile backsplashes, among other fixtures. 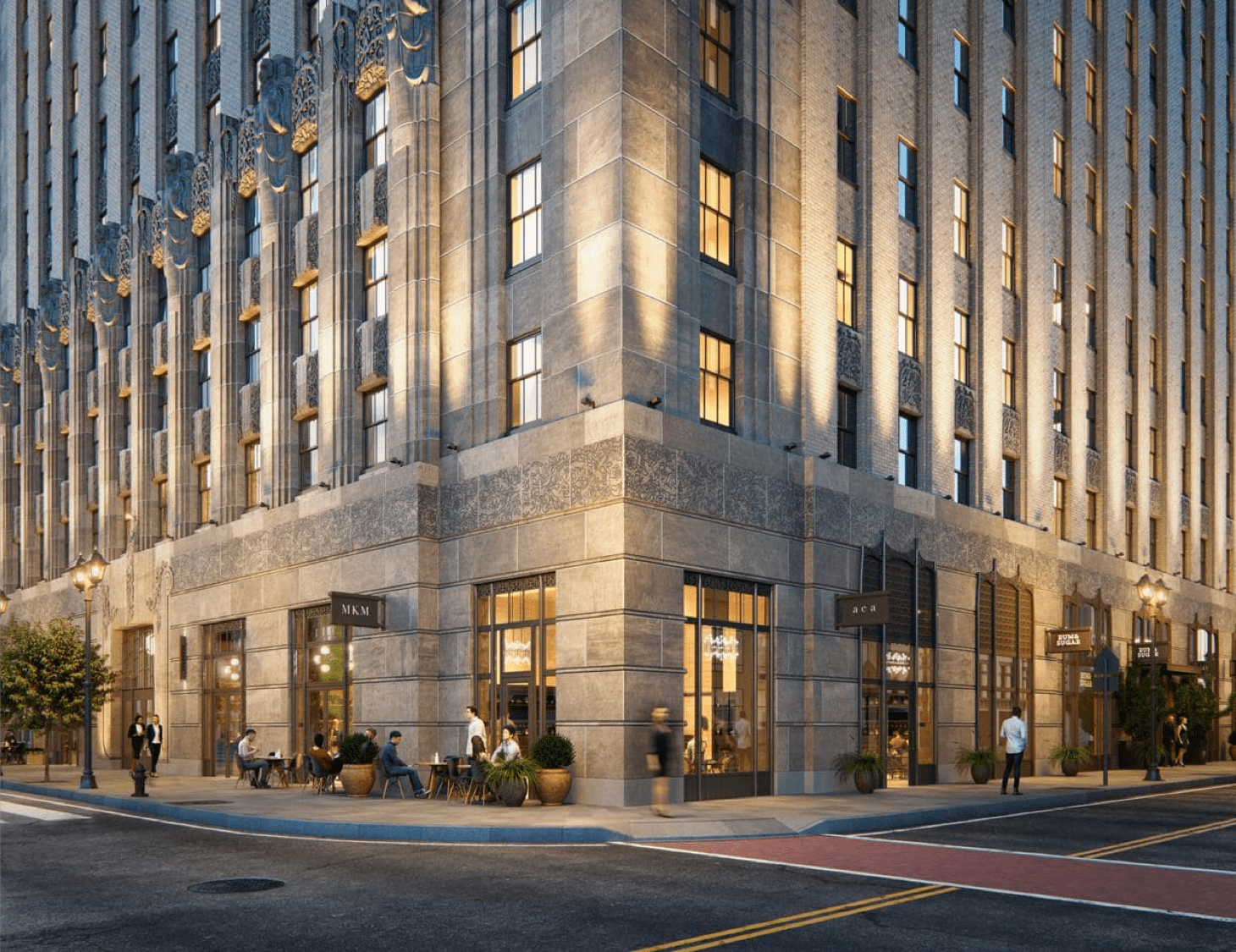 Then there are the amenities. Walker House is concentrating its residential amenities on its 21st floor, which will feature a rooftop terrance with a fire pit and barbecue grills, fitness center and yoga room, kitchen with a dining room, library, game room, pet grooming room, additional residential storage and a laundry room with high-capacity machines. “The space is going to be spectacular,” Cortell said of the rooftop, which will be the first residential high rise Downtown Newark to feature amenities on its top floor.

Like the Hahne’s building, said Cortell, Walker House was developed with the 2008 Living Downtown Plan in mind. Created during then-mayor Cory Booker’s administration, the plan prioritized development that would transform downtown into a “24-hour district,” with mixed-use development leading the way—and with a particular emphasis on replacing downtown buildings’ upper-floor vacancies with commercial activities and new housing.

“Hahne’s redevelopment was very much the implementation” of the spirit of that plan, said Cortell. Now with Walker House, the city gets “an active building that is a sumptuous architectural space.”

Walker House might also shake things up on the north end of Broad Street by kicking off a wave of higher-volume residential development that will help bring a critical mass of residents to the hyperlocal neighborhood within blocks of Washington Park. Riverfront Square, a massive mixed-use development planned for the former site of Bears Stadium on Broad Street, is currently in the works and scheduled to launch in 2021.

Cortell said Walker House “is exactly what the doctor ordered for an already-vibrant north end” of Broad Street, citing Newark Museum, Rutgers-Newark, Newark Public Library and Audible as among the companies and institutions that are already anchoring and peopling the neighborhood–at least during the daytime. Walker House, said Cortell, will help round out the landscape there. The redevelopment is “not only the celebration of a beautiful building,” he said, “but a beautiful building in a great city.”

To preview Walker House, visit LiveWalkerHouse.com. For details on the affordable housing application process, visit 540affordable.com or follow this link to download the application directly.