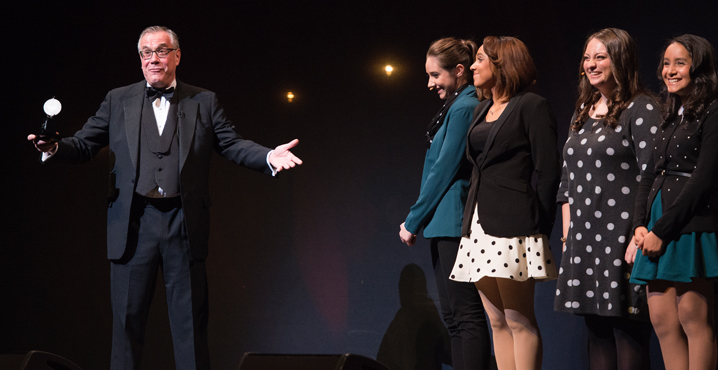 Reposted with permission from NJPAC
As Mama Rose would say, “Sing out!” And they sure did. Four Broadway divas added to a quartet of talented teenage girls made for a performance that guests could not stop gabbing about at Spotlight Gala 2014, the Women’s Association of NJPAC’s 19th annual fundraiser on Sept. 27.
As one audience member observed, “When the girls came out, I thought they were the headliners.”
Students in NJPAC’s Arts Education program – Janayla Montes (17), Marisa Budnick (16) and Elizabeth Kallay and Tyler Korin Matos (both 14) – blazed into the opening of the Nothin’ Like A Dame concert with a medley of Manhattan-esque show tunes and returned to the stage several more times to pounding applause. Through the years, the WA has generated some $43 million for NJPAC, with the greater share reserved for Arts Education initiatives.
The evening’s leading ladies were Laura Benanti, Patina Miller and Faith Prince (all Tony Award winners) and Andrea McArdle (the youngest performer to be nominated for a best musical actress Tony, for Annie).
When the onstage patter referred to “The Arts Ed Girls” as future Tony awardees, NJPAC President and CEO John Schreiber made a surprise appearance with his own Tony Award, given for his producing role in Elaine Stritch At Liberty. In a kind of Sisterhood of the Traveling Tony Award, the teens were invited to take turns keeping Schreiber’s Tony for a month each as career incentive or just for “practicing acceptance speeches in front of a mirror.”
The performance’s two “honorary dames” were the world’s longest-running “Phantom” – Howard McGillin – and Musical Director Seth Rudetsky (SiriusXM’s On Broadway), who hosted, swapped show-biz anecdotes with his actor friends, and conducted his musicians from the piano.
Gala guest Joseph P. Benincasa, President and CEO of The Actors Fund, recalled conferring with Schreiber about gathering artists for the benefit. “All you have to do is call Seth Rudetsky and you have a show,” he said. “John asked the right question and I had the right answer.”
Some of the program’s ah-mahzing highlights (to quote Rudetsky) included McGillin’s swoon-worthy “The Music of the Night” from The Phantom of the Opera; a Pippin medley from Miller, who won the Tony for that musical’s current revival; a personal pastiche of the favorite songs of Jersey’s own Benanti; and showstoppers “Tomorrow” and “I Dreamed a Dream” from McArdle. As the finale, Prince was joined by Rudetsky and “The Arts Ed Girls” as backup in “Suddenly Seymour” from Little Shop of Horrors.
People also seemed genuinely amazed that 20 years had passed since the founding of the WA, prior to NJPAC’s opening in 1997. “Since the time when we wore hard hats,” mused Gala Committee Member Audrey Bartner, referring to the start of her involvement with the WA.
This year’s award winners were NJPAC Board Co-Chairman William J. Marino and his wife, Paula (Chambers Award for Service to the Community and to the Arts); NJPAC Founding President and CEO Lawrence P. Goldman (Ryan Award for Commitment to NJPAC and Leadership in the City of Newark); and Harold L. Morrison, Jr. and Chubb Group of Insurance Companies (Vagelos Award for Corporate Commitment to the Arts). Gala Co-Chairs were Erica Ferry and Karen C. Young and Dinner Co-Chairs were J. Fletcher Creamer, Jr. and Linda A. Willett, Esq.
Christine C. Gilfillan, President of the WA – or rather, her avatar – made an appearance on video in an animated short about the WA’s past and present.
The festivities, which evoked an opening night on Broadway, glittered with decorative touches of black and gold and centerpieces of deep red roses. An Art Deco motif of a gowned figure was repeated in the décor, including nine “hidden” projections of the diva inside and outside the Arts Center.  Gala-goers dined on fennel-dusted seared tuna and clementine glazed duck with creamed spinach over black beluga lentils and golden roasted sweet potato.
Bringing everything to a sweet conclusion was the transformation of the lobby into a networking lounge and Dessert Extravaganza. Revelers crowded the dance floor in the tent, and the band kept rocking. By the end of the night, more than $2 million was raised for NJPAC.
“Tonight showed all of us that lively, engaged audiences come to see the arts in Newark,” said Mary Sue Sweeney Price, Director Emerita of the Newark Museum. “This was total fun and the icing on the cake was that it raised money for the Arts Center.”
Her husband, NJPAC Trustee Clement Price, Professor of History and Director of Rutgers University’s Institute on Ethnicity, Culture, and the Modern Experience, called the Gala “an extravaganza of fellowship, discovery and artistry at the highest level.”
https://brickcitylive.com/wp-content/uploads/2014/10/Schreiber_Tony_Gala_718x370.jpg 370 718 Andaiye Taylor https://brickcitylive.com/wp-content/uploads/2018/07/Brick-City-Live-Logo-White-Red.png Andaiye Taylor2014-10-06 00:14:392014-10-05 22:39:43The Women’s Association of NJPAC stages a ritzy, glitzy salute to Broadway divas as a benefit for NJPAC
7 replies