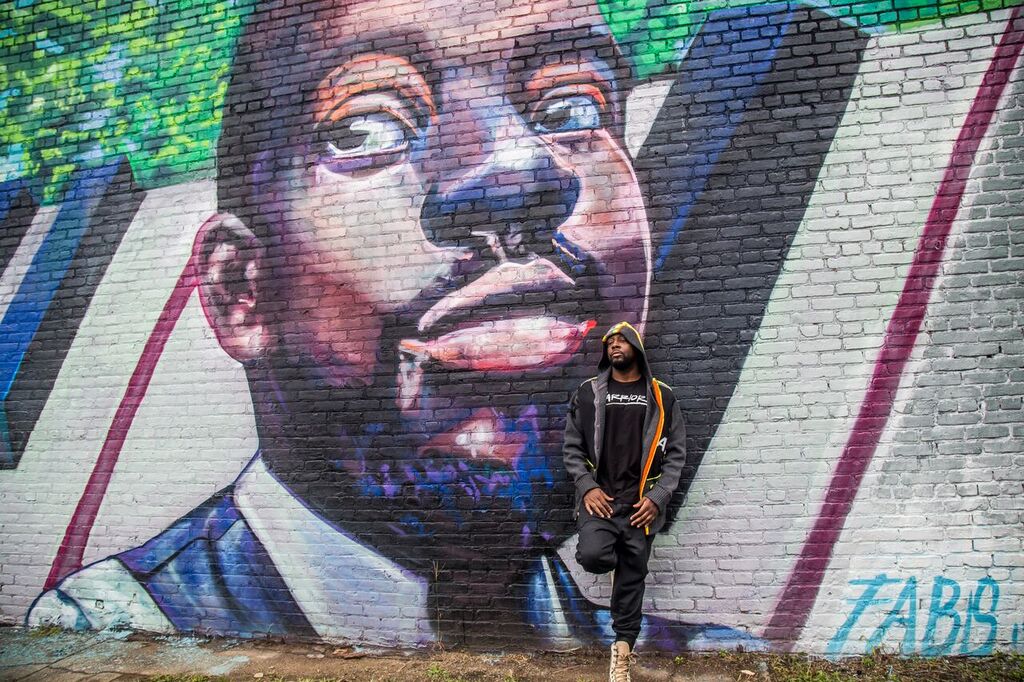 Wyclef Jean pictured with a mural in his honor by Camille “FABS” Côté at 513 Central Avenue in Newark. Photo courtesy Prudential Center

Long after the ribbon cutting, after most of the reporters had packed up their cameras and left, international music star Wyclef Jean stood underneath a newly-unveiled mural painted in his honor and playfully traded rap verses with Newark residents while a dozen or so local spectators eagerly captured the scene on their cell phones.

The impromptu vocal jam session made it clear to all who had stuck around that to Jean and local residents in attendance, this wasn’t a celebrity event. It was a community event.

The mural depicting Jean, a long-time Newark resident, was painted by Camille “FABS” Côté, an Englewood, NJ, native who has had her work shown throughout the world. “Key To Life” is the first of five murals that have been commissioned as part of a partnership between Prudential Financial, the Prudential Center, GRAMMY Museum Experience Prudential Center, YENDOR Arts, the Newark Arts Council, and the city.

The inaugural location chosen was on the side of a building recently acquired by the Urban League of Essex County, at 513 Central Ave., in the Fairmount neighborhood. Previously a bar, the building now serves as an extension of the Urban League’s thrift shop, while the once overgrown accompanying lot has been cleaned up and converted into a green space with a patio. Speaking at the event, Urban League President and CEO Vivian Cox Fraser spoke of the importance of creating such spaces in previously undeveloped areas, pointing out that initially, planners believed that the “only green space in Fairmont, was the cemetery.” Recognizing the potential at the corner of Central Ave. and 18th St., however, changed the plan. “Clearly with this investment,” she continued, “the support of Prudential Financial, the Prudential Center, the GRAMMY Museum and the City of Newark, we can declare that this is no longer the case.” 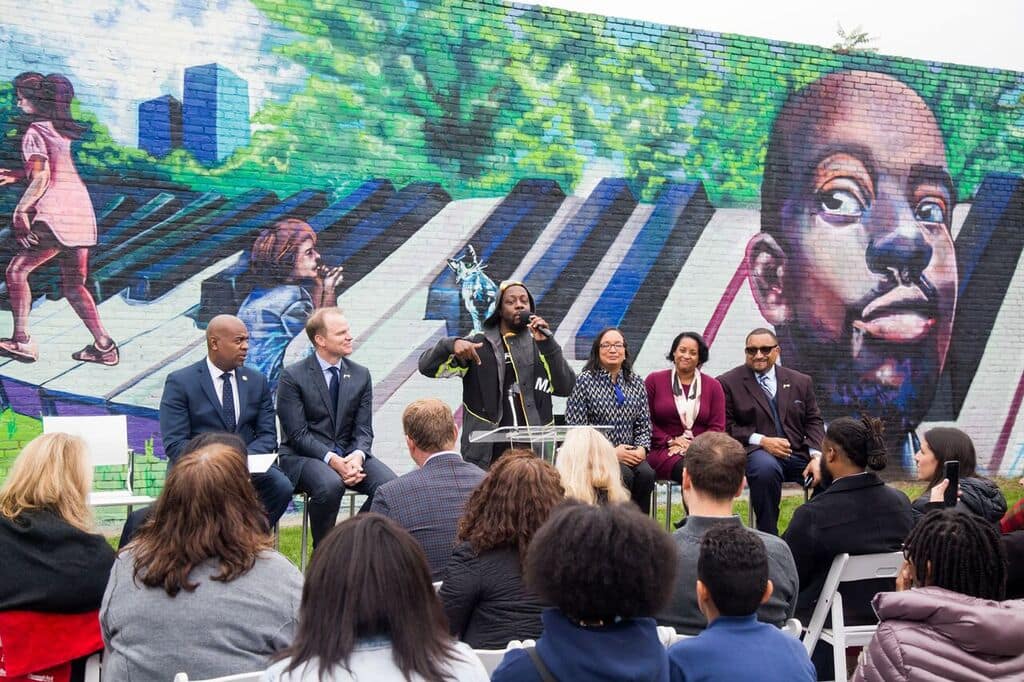 Other speakers expressed the importance of uplifting all of Newark’s communities through these artistic and philanthropic endeavors. Newark Arts Council Executive Director Jeremy Johnson emphasized that these partnerships are forged with the entire city in mind. “This space is not by accident,” he proclaimed. “This is the right space at this right time. Newark is in the top ten of arts vibrant cities in the U.S., but we’re not just talking about one part of our city. Not only Downtown, but all of our neighborhoods.”

Mayor Ras Baraka spoke next, reminding the audience of Newark’s rich musical history, and reinforced the city’s pledge to continue arts-based initiatives. “A lot of times, we take our artists for granted. We don’t do that in Newark,” Baraka stated. “We think art is essential to economic growth, to social growth, to intellectual growth, and to community growth. Without art, we don’t have community.”

Last to the microphone, Jean turned to a congregation of young students from the Philip’s Academy Charter School to inform them of his own musical legacy. “I have to do this for the kids. I have to let them know how cool I am,” he joked, before dropping a major milestone in his career. “I’m from Newark, New Jersey, and I gave Beyonce her first hit.”

After rattling off a few more collaborators he has worked with — Shakira, Carlos Santana, Lil’ Wayne, Drake among them — he implored the students to “remember the name, Wyclef Jean,” reminding us all that he is still very much in the game. “I’m talking about now, you can Google me, I’m hot right now — while I’m standing here,” he said to a round of laughter. “Not ‘96 hot… right now hot.” 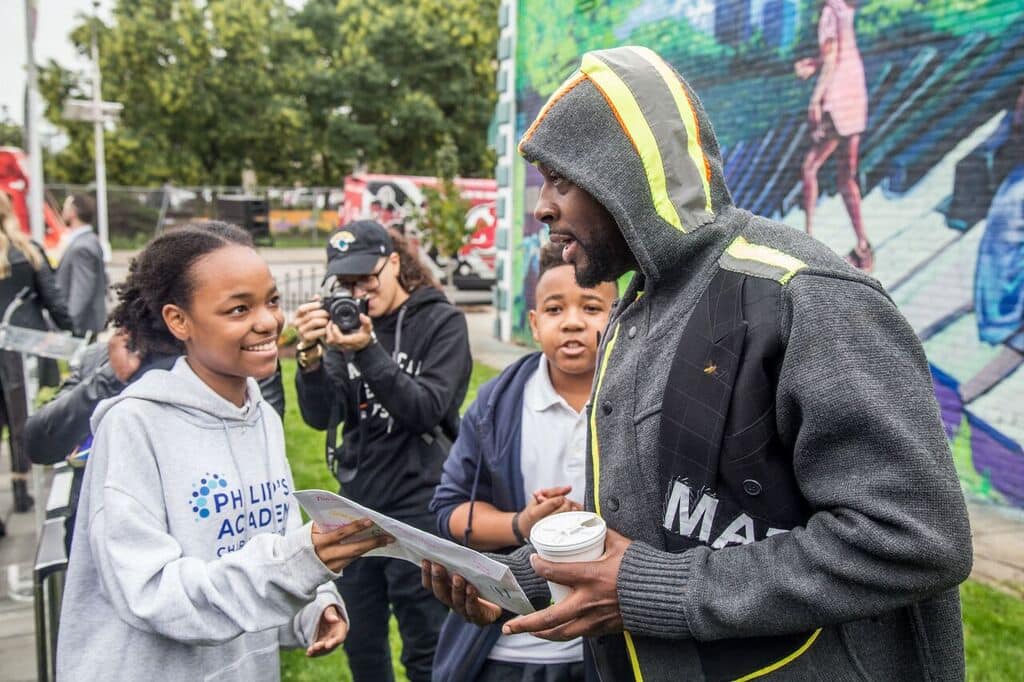 Wyclef chats with students at his mural unveiling. Photo via Prudential Center

Then he brought it home. “And I’m from Newark,” Jean said proudly, going on to recount some of his local childhood, particularly how teachers at Vailsburg High School helped him discover his musical talent.

Jean went on to humbly accept the honor of the day, telling the crowd that while the mural depicts him, it represents a larger, inspirational message. “I would never be able to do [these collaborations] if i didn’t understand the fundamental of music as art that is universal,” he said, turning to the students. “So we see Newark, but to me, Newark has always been international. So when you see Uncle Wyclef’s face on that, just know it’s not my face, it’s y’all face. And it’s going to continue to be y’all face.”

He then concluded. “I love the youth 100% — Newark forever!” and with that, the official ceremony ended. Jean, along with the other speakers and officials, went on to mingle with those assembled. Photos were taken, conversations were had, information was exchanged, and the aforementioned rap cypher eventually kicked off, while DJ Sir William, who also spins for the New Jersey Devils, played out the rest of the event.

In the end, it was Shané Harris, Vice President of Corporate Giving at Prudential Financial, who may have said it best during her speech. “We know that the mural series will bring beauty and color to all of Newark’s wards, for everyone’s enjoyment.”

And in fact, a threateningly cloudy sky stood no chance of overshadowing the vibrancy of FABS’ work, or the aura of possibility that emanated from a small, corner lot in the West Ward when government, corporate entities, and the people are able to come together to uplift and inspire the community.

A key to life indeed.

“A rare confluence.” One Theater Square developer Carl Dranoff on...