Editor’s note: Hycide Magazine will host a celebration of Gant’s life and legacy on December 16 from 5-9 p.m. at the Newark Museum.

You do not have to have known Jerry Gant personally to have experienced Jerry Gant. He left his mark all over Newark: the mural on the façade of a church just outside Lincoln Park of four African-Americans angels singing; the stylized metal cutouts depicting African-American musicians that separate the taxi stand and the sidewalk outside of Penn Station; the abstract metal wind chimes in the gardens at the Newark Conservancy. And that’s just the beginning of the list.

A prolific multi-media artist, Gant died Nov. 11, ten days shy of his 56th birthday. The cause of death was complications from liver cancer, according to his good friend and collaborator, Linda Street.

Jerry Gant’s work was interdisciplinary: he was a spoken word artist, graffiti artist, painter and sculptor. Gant was a fixture on the Newark art scene for more than 25 years. As recently as mid-August, he was the star of the show at an open mic at the Mocha Lounge on Academy Street. And he participated at the Newark Museum’s Late Thursday series “For Freedoms’’ on Oct. 18.

Born in Newark on Nov. 21, 1961, Gant lived his entire life in the city. His father died when he was young (“It was poverty beating him into submission,” he once told an interviewer), and he was raised by his mother, Shirley. A self-taught artist, Gant attended West Side High School and Essex County College. He also studied at the Newark School of Fine Arts.

Gant began his artist career as a hip-hop performer and graffiti artist. However, he often credited his success to “crawling, scratching and twisting’’ that came after he hit rock bottom, started “detoxing the ghetto that was in his mind’’ and began studying on his own at the Newark Public Library. Important influences were the artist Jean-Michel Basquiat (whose roots are also in graffiti art) and the filmmaker Spike Lee.

Gant’s art tells a personal story but also speaks to a collective experience. As Gant explained in an artist statement which was included in Street’s self-published overview of Gant’s work, Bulletproof Ambition: 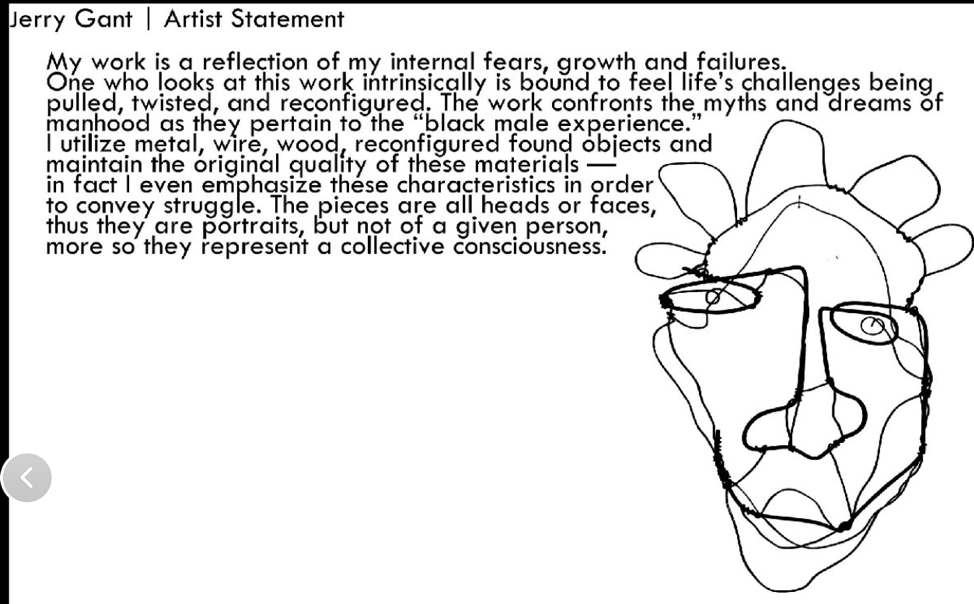 “My work is a reflection of my internal fears, growth and failures. One who looks at his work intrinsically is bound to feel life’s challenges being pulled, twisted, and reconfigured. The work confronts the myths and dreams of manhood as they pertain to the “black male experience.” I utilize metal, wire, wood, reconfigured found objects and maintain the original quality of these materials–in fact I even emphasize these characteristics in order to convey struggle. The pieces are all heads or faces, thus they are portraits, but not of a given person, more so they represent a collective consciousness.” Jerry Gant’s artist statement in Bulletproof Ambition, by Linda Street.

Gant’s artistic vision was further articulated in an interview with the Newark writer and historian Nell Painter in 2015: “So when I create artwork or perform or even in social dialogue, I always got to think that it’s not just my individual narrative or story or experience, but I’m a part of a shared experience. And for me, my homework assignment or my state of consciousness is to always to think about me and we,’’ he said.

Gant loved wordplay, often spicing up his day-to-day speech with rhyme. He called his way of being “Gantalism.’’ Even his appearance was an artistic statement: he was always dapper, finding whimsical ways to add pops of color to an outfit or by wearing hand-dyed, bleached and painted and silk-screened jackets, T-shirts and pants that he himself designed.

Newark’s love for Gant was on full display at a homegoing ceremony last week at Newark Symphony Hall. The event was part art exhibit, part tribute, part celebration and ended with a nod to Gant’s origins as a graffiti artist: the tagging of his casket by the many of the hundreds of people who attended the ceremony.

Since then, tributes to Gant and his spirit of Gantalism have been flowing on Facebook: Photos were posted by Jeff Billingsley, the Newark entrepreneur and film producer. Gary Campbell, the creator of The Artist Recreates the World, a YouTube series featuring interviews with artists in Newark, re-posted his interviews with Gant. And the Newark poet Kween Moore, a frequent Gant collaborator, hosted an open mic dedicated to Gant at The Blueprint Café, which she livestreamed.

There have also been a profusion of written tributes. Here’s a sampling, starting with an excerpt from a poem written by Gant’s close friend, Linda Street. The poem, called “A Very Jerry Farewell,’’ captures the spirit of Gantalism:

From Nell Painter, artist and historian:

An excerpt from the Rev. Kevin Taylor’s reflection on Gantalism. Taylor, the pastor of the Unity Fellowship Church, officiated at Gant’s homegoing ceremony:

From Emma Wilcox, the co-founder of Gallery Aferro, where Gant was a regular exhibitor:

Not only did Gant leave a strong mark on Newark, he also left a strong digital footprint online. Here are some sources that will help you learn more about Gant’s life and vision: