Don’t be a victim-blamer: Michael Brown, carjacking, and the Newark Civilian Complaint Review Board 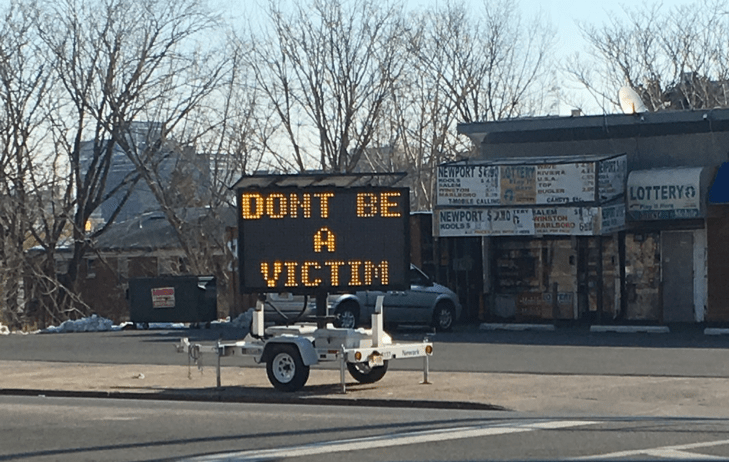 In the past few weeks, a number of electronic signs have popped up around Newark. Most of them instruct people to not leave their vehicle running or unattended, followed by the admonition, “Don’t be a victim.” Though Newark has been known for carjackings, the timing of these signs feel a like response to the recent carjacking that left three people dead. In late January, two teenagers, Quadre Robinson and Quayim Battle, drove a stolen car into a house on Bergen and Madison Avenue, killing both of them. Then, at the memorial on that same intersection, four teenagers were shot, and one, Jayla Green, was killed.

But seeing signs like those makes me wonder what’s productive about tough love that focuses on what people should not do to avoid victimization. The signs are a very indirect way to say that people’s cars are getting stolen. But cars can get stolen no matter what you do. I remember a couple Thankgivings ago when Sharie Henry was killed during a carjacking while returning to her vehicle with her nephew. The problem isn’t people leaving their cars for a second while they run into a store or that people walk up to their cars with keys in their hands, it’s that people feel compelled to steal cars. And instead of saying “Stop stealing cars,” the signs tell us to stop getting our cars stolen.

Those flashing signs were on my mind while I was at the Newark Communities for Accountable Policing (N-CAP) screening of the film Stranger Fruit by Jason Pollock. The film details the spread of misinformation surrounding Michael Brown’s police killing. Brown was shot seven times execution-style by Ferguson Police Officer Darrel Wilson for walking in the middle of the street on August 9, 2014. The treatment of his dead body, which lay on the ground for more than four hours in one-hundred-degree weather, paired with other factors, like Brown being unarmed and the randomly released (and completely unrelated) “robbery” video, sparked world-wide attention. Stranger Fruit wasn’t just about exposing the lies but was also about how those lies reflect the system of policing in America.

Perhaps the most powerful segment of the film was when Brown’s friend, Dorian Johnson, recounted the events of the deadly interaction in the middle of the same street it happened on just a few years ago. Standing alongside Pollock with cars driving past them, Johnson tirelessly acted out the scene as himself, and then separately as Brown, during his informal reenactment. He showed where he was when he froze in place as Wilson shot at Brown while the teenager ran. Then, Johnson-as-Brown got down on his knees in the street to show how Brown yelled out, “Stop shooting me, stop shoot—” as he died. It was powerful to see him act it out, especially since what most people saw on that street were the pictures and videos of Brown laid out with a stream of blood near his head.

The opening of Stranger Fruit included a cell phone video of Brown on graduation. His mother, Lesley McSpadden, talked a little about how hard it was to get him to graduate high school. Brown was at a school with a 62 percent graduation rate. For context, Newark’s graduation rate wasn’t far from that in 2014 at 68 percent, though it has been steadily improving every year since (now it’s 78 percent). The topic of staying in school came up when William “BJ” Johnson spoke at the N-CAP event. He talked about the history of the Black Panthers and the misunderstandings about their values. Someone asked him recently what the difference was between the Panthers and the Ku Klux Klan. He recalled saying, “Easy—the KKK were racists, and we’re about solidarity.” He said that what sparked so much distrust of the Panthers, however, wasn’t just their ideology but their free breakfast program, though it ironically spread to schools all over the country afterwards.

There was also some discussion that night about the racial identity of police officers in Newark. The host, Zayid Muhammad, said that he appreciated that there are more non-white officers than there were decades ago, but he was careful to point out that it doesn’t automatically prove their effectiveness. Muhammad also spoke more specifically about the relationship between Stranger Fruit and local police brutality. He was excited to bring up the new independent prosecutor bill, which requires that an independent prosecutor investigate the death of a civilian killed by police or in police custody. Muhammad’s main call-to-action was for the Civilian Complaint Review Board (CCRB) in Newark, which was established in 2016 by the Municipal Council, but whose powers were reduced in 2018 from full subpoena and investigative powers to oversight powers only. He encouraged people to show up for the appeal on April 1st, announcing that “this is our time.”

These two efforts, the bill and the board, cover two important angles of police violence, but I contend that police brutality ultimately isn’t just about killing someone or engaging in misconduct—I contend that policing is violence. Their protruding guns are violence, super-tight handcuffs are violence, not getting a seatbelt in the back of a cop car is violence, cavity searching is violence. Less police brutality is a conservative goal, though it’s a necessary step. The police need to admit that their practices are violent because the problem isn’t just excessive force, it’s force at all. Body cameras, stop-and-frisk, undercover cops, a flashing sign on Washington and Broad Street warning that there are police around—it’s all about surveillance, especially the kind where we don’t know when or how we’re being watched. These aren’t peace-building measures—they create fear.

When thinking of the relationship between the police and the people, the narrative often pivots to one about the people and the people. How responsible are citizens for not stealing one another’s cars or not killing each other? It’s important to zoom out and see that those actions are reactions to bigger systematic problems, like poverty, that keep people so disempowered that they are willing to do anything for a little piece of power. If Robinson or Battle had access to a car, would they have stolen that SUV in the first place? Who knows. But if there was, say, an effort to give or loan cars and driving lessons to Newark teenagers, maybe their interest in mobility could turn into opportunities instead of arrests.