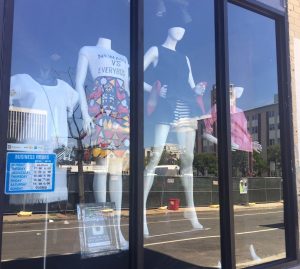 Shop Newark, the program we reported on in detail back in September, will officially launch in June of this year. During a press conference held earlier this week at the newly opened Smitty and Mo’s in Gateway 2, Karen Brown-Stovell, who brought the concept to Newark, officially invited businesses to sign up for the program.

The concept is simple: when consumers shop at businesses who have signed up to participate in Shop Newark, they will receive a rebate on their purchase based on terms set by that business. For example, if Newark Widgets offers a 10 percent rebate on all purchases, and a consumer spends $10, then $1 will be added to that shopper’s annual rebate tally. The consumer would receive their full rebate in the form of a property tax credit or check each year.

Brown-Stovell is executive director of Forward Ever Sustainable Business Alliance, which was founded in Newark five years ago by Kimberlee Williams and is the first urban chapter of the Business Alliance for Local Living Economies, or BALLE. Brown-Stovell said she became aware of the shop local program when she saw it in action in another city, and thought it would work well here in Newark.

The program took about two years of work to bring to fruition, with Brown-Stovell even shouldering the passage of a city ordinance to make way for it. Shop Newark received a significant assist from Aisha Glover, CEO of the Newark Community Economic Development Corporation, which Brown-Stovell brought into the process early-on.

Joe DeFalco of Fincredit, the bank that administers the program, said 23 municipalities in the state already have implemented the local shopping initiative. The average annual rebate check for consumers is about $300 to $400, but if the program is used “intentionally,” said Brown-Stovell, checks could be as large as $700 or $800. DeFalco said the mayor of Marlboro, which implemented the program four years ago, personally saved $2,000 on his taxes by using the program.

“Localism is about empowering small businesses” said Brown-Stovell, and is a way to build inclusive progress and keep dollars circulating in the community. As for the businesses, participation will help them get noticed and bring traffic through their doors. The program’s website promises “substantial marketing, branding and promotion” for the $10 monthly fee.

Mayor Ras Baraka added that the program offers Newarkers an opportunity to do their part to give the city an economic boost. “While we tell everybody else to invest in the city of Newark, we have to get Newarkers to do the same,” he said.

Looking for summer activities for Newark students? Enter Summer Plus