Updated 6/22/2018. 12:35 p.m.: This story has been revised to note that the Classic Car Show originally scheduled for Saturday, June 23 has been moved to Saturday, June 30th due to rain in the weather forecast. 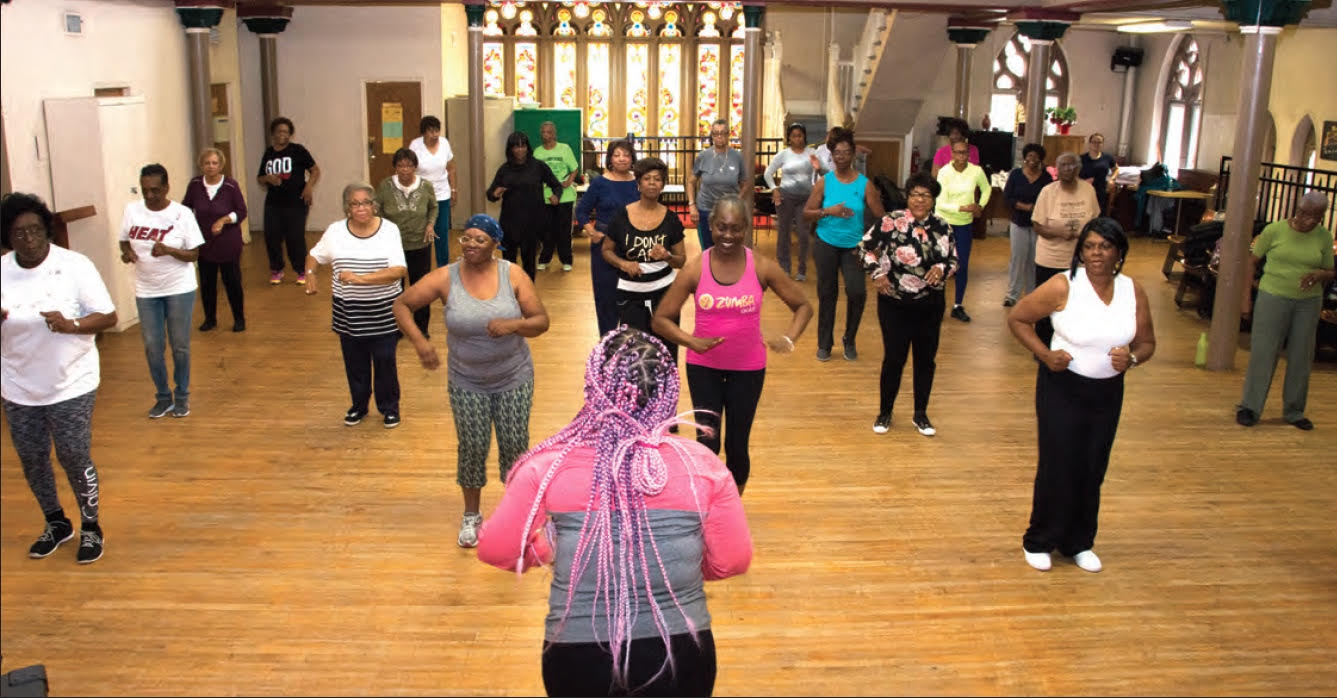 A Zumba class at St. James AME Church in Newark, part of the African American Brain Health Initiative. Scientists are finding that participants who take the class regularly are experiencing improved learning abilities.

Ask Francis Dixon if he knows anything about Alzheimer’s Disease and you’ll get two kinds of answers – one has to do with living with it, the other with what a person can do about it.

Dixon can tell you how he watched his mother fade, her brain attacked by the progressive brain disorder over two-and-a-half years, robbing her memories, her ability to recognize the face of her eldest son. “Those things were painful,” Dixon said.

Shortly after his mother’s death in 2009, Dixon, a deacon at the New Hope Baptist Church in Newark, learned of a pioneering study in its early stages at Rutgers University in Newark. The African American Brain Health Initiative (AABHI), he learned, was conceived to combine the forces of Rutgers scientists with Newark-area residents to combat the dreaded disease, which afflicts African Americans at twice the rate of white Americans. Its organizers, Dixon found, needed trusted members of the community to inform residents about the study and invite African American men and women over 55 years of age to participate in research studies. Dixon joined the study’s Community Advisory Board, and has been talking about the disease and encouraging people to join the study ever since. 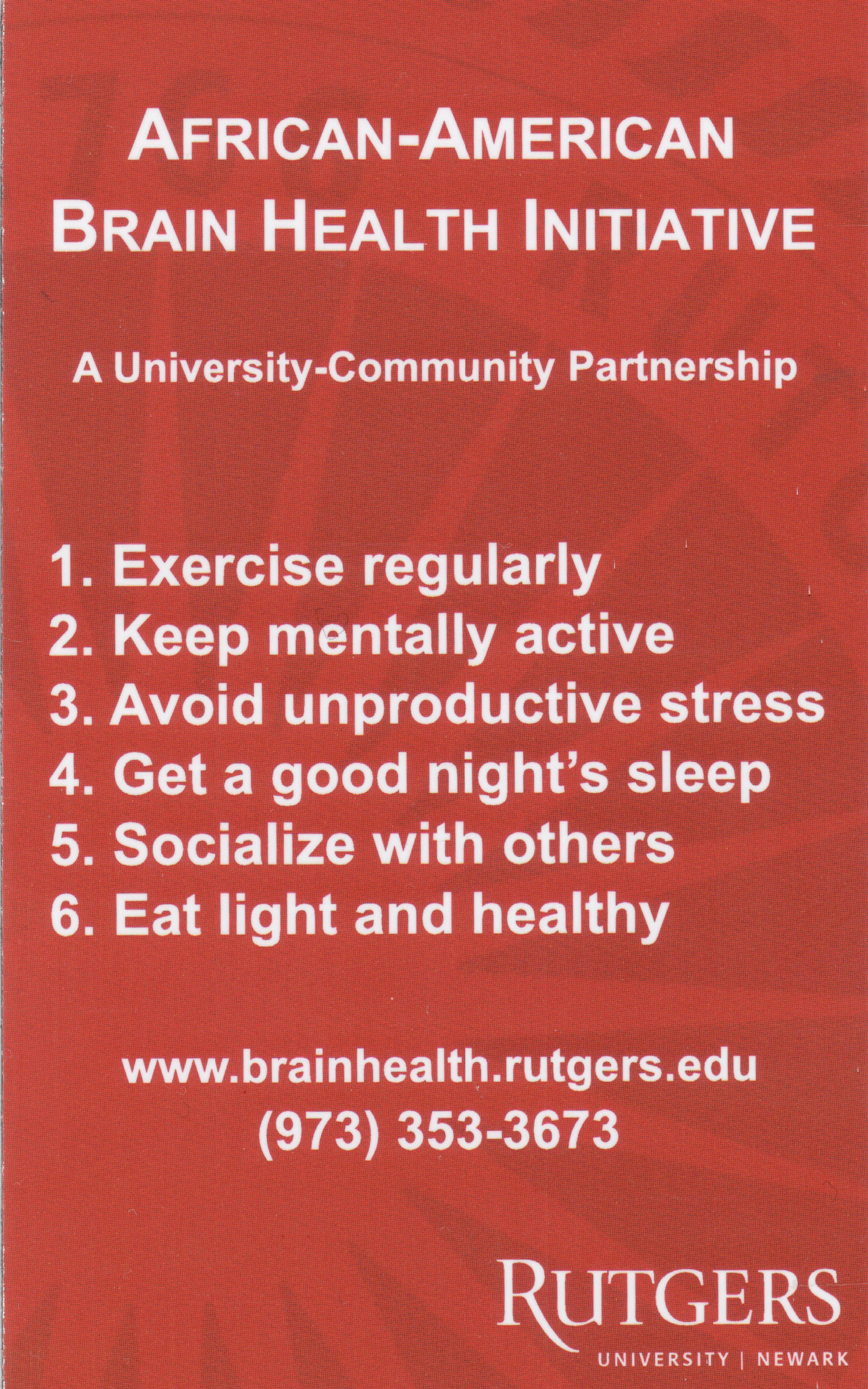 This information card is handed out to people attending information events sponsored by the African American Brain Health Initiative. Click or tap to enlarge.

If you are anywhere near downtown Newark on Saturday, June 30, from noon to 2:30 p.m., (see calendar for details) you can meet Dixon, along with many others, and hear them speak about Alzheimer’s on behalf of AABHI. The initiative is staging its annual Classic Car Show, exhibiting a fleet of locals’ antique and classic cars at a Rutgers-Newark parking lot at Bleeker and Washington streets. Organizers of the study, which has already enlisted more than 250 people, mainly women, are seeking more African American men to participate in the study. They are hoping to draw them to the event, where community outreach experts can provide more information.

“I believe that the study is an opportunity for an individual to become at least aware that, although we still cannot prevent Alzheimer’s, we can certainly take some real precautions and we may be able to help identify some of the disease’s symptoms,” Dixon said. “For our community, that is huge. Because, with most chronic diseases, our community is probably, usually, the last to be informed, unfortunately.”

More than 5 million Americans may suffer from Alzheimer’s Disease, a degenerative brain disorder of unknown cause that usually starts in late middle age or old age and results in progressive memory loss, impaired thinking, disorientation and changes in personality or mood.

AABHI is directed by Mark Gluck, a professor of neuroscience at Rutgers’ Center for Molecular and Behavioral Neuroscience, and Diane Hill, Rutgers-Newark’s Assistant Chancellor, University-Community Partnerships. “In Africa, the rates of Alzheimer’s are no greater than they are here (among the general population),” Gluck said. “So, the higher rate of Alzheimer’s in African Americans is something specific to the African American community here in the U.S. The good news is that it is probably not destiny – the health disparity is most likely due to modifiable lifestyle, diet, and, behavioral factors.” 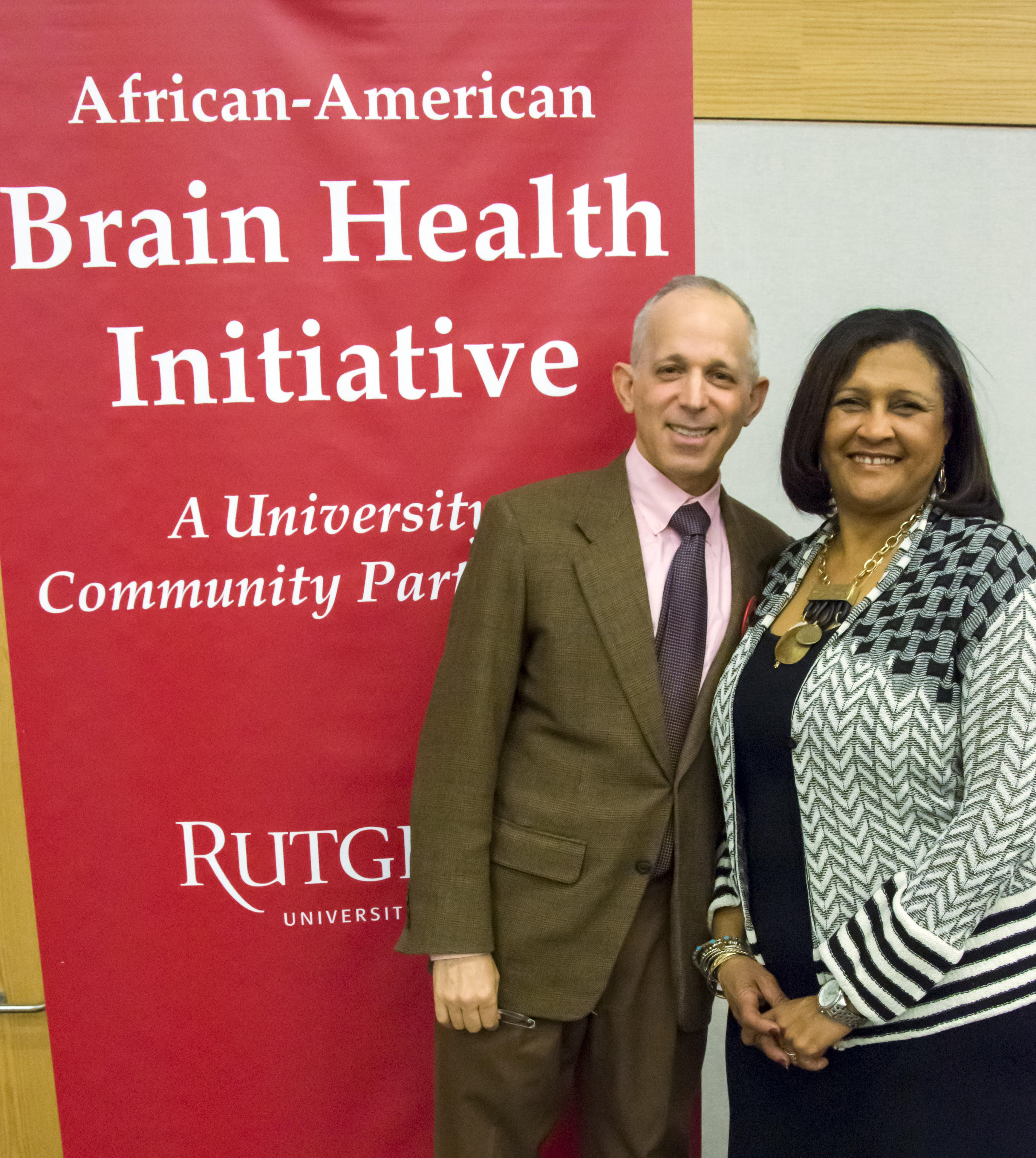 Mark Gluck, (at left) a professor of neuroscience at Rutgers’ Center for Molecular and Behavioral Neuroscience, and Diane Hill, Rutgers-Newark’s Assistant Chancellor, University-Community Partnerships co-founded the African American Brain Health Initiative in Newark. Their goal is to build a nationally renowned, federally funded center of excellence for the study of brain health, aging, and Alzheimer’s disease in African Americans.

Approximately 200,000 Americans under the age of 65 have early-onset Alzheimer’s. A sedentary lifestyle, an unhealthy diet, and poor sleep habits, along with genetics may determine who will develop the disease, Gluck said. Studies being conducted by researchers at the Newark-based initiative are looking to determine whether enhanced exercise programs and improved dietary habits can delay the onset of the disease in those with a family history of the disorder.

“I was born and raised in Newark,” said Hill, the initiative’s co-director who holds a doctoral degree in urban systems and has spent decades forging award-winning partnerships between the university and the city. “It’s important to me to make sure we are going to do good things for the community. I don’t want the perception to be ‘We just want to research you.’”

The black community, Hill said, is rightfully skeptical of medical research practices, scarred by historical horrors such as the Tuskegee Syphilis Experiment, an infamous U.S. Public Health Service clinical study run from 1932 to 1972. The purpose of the study was to observe the natural progression of untreated syphilis in rural African American men in Alabama under the guise of giving them free health care from the government.

Gluck’s and Hill’s goal is to build a nationally renowned center in Newark, central to contributions improving the brain health of African Americans. The Newark-based brain initiative has already enlisted the support of 14 churches, 13 senior buildings and centers, and 11 community-based organizations, Hill said, as well as a 17-member advisory board of leaders from churches, community centers, government, advocacy groups, and health associations.

There are two initiative-sponsored studies underway. The first, at the end of its third of a five-year span and funded by the New Jersey Department of Health’s Office of Minority and Multicultural Health, is designed to investigate whether twice-weekly Zumba classes can improve brain function and memory and potentially reduce the risk of participants developing Alzheimer’s. 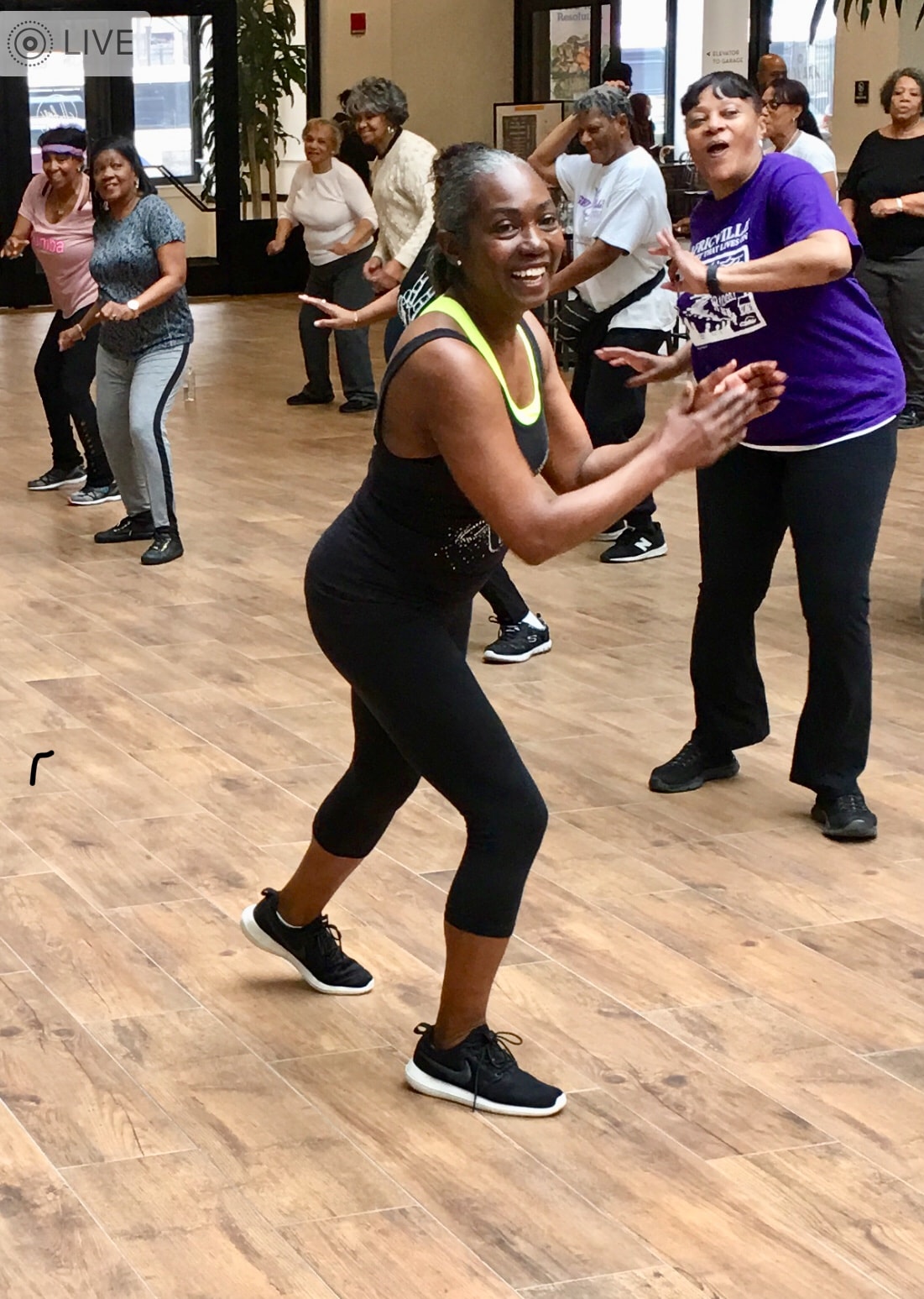 Crystal Gaynor, a licensed Zumba instructor, leads a class as part of the African American Brain Health Initiative. Since a sedentary lifestyle may be a factor in the onset of Alzheimer’s Disease, researchers are studying whether regular exercise programs can delay or even halt its progression. Photo courtesy of Crystal Gaynor.

A second study, funded by the U.S. National Institutes of Health’s National Institute of Aging, is focused on examining the brain health of African Americans aged 65 and older over a five-year period. Study organizers have already enrolled more than 250 people. Through events like the annual car show and outreach to city barber shops, those involved in outreach are hoping to add more men to the study and a total of about 120 residents each year.

Deacon Dixon said that through his outreach efforts he has encountered people who are receptive to the study as well as those who are less so, having a mistrust of government. A bigger challenge, however, has been a more general apprehension among potential study participants. “A lot of folks just don’t want to know whether there is a possibility they will develop the disease,” he said.

Another advisory board member, the Rev. Jacqueline Reeves, said she feels good about encouraging engagement among community members because there is something to be gained by participating. She has met with hundreds of community members over the years at the “Lunch and Learn” seminars the initiative has sponsored throughout the city. Those who attend are served a healthy lunch and are taught about the signs of Alzheimer’s, as well as given other health tips.

“By eating healthy, by gaining knowledge about what is going on with this type of disease, by learning how they can help themselves and their family members, we are giving them information,” Rev. Reeves said. “And information is power.”

Reeves, who is a minister at St. James AME Church in Newark, is also working at St. Paul AME Church in East Orange and bringing the message there, too. When discussing participation in a study with a member of the community, she noted: “I can’t say that it is preventive, but I can say that if you get the information, you can delay some of the things that are going on within the brain.”

Recently, Gluck and team members found that they may have developed a way to identify people who are likely to develop Alzheimer’s before major symptoms set in. The earlier clinicians can detect deficits, Gluck said, the easier it may be to measure patients’ mental changes over time. This, in turn, may help in the development of new drugs that can be employed to halt or delay the onset of the disease before it causes widespread destruction of brain cells.

Even in the face of such a seemingly unbeatable disease, Dixon said, the research going on in Newark is a beacon of hope. “With any chronic disease, early detection is always best, and that resonates with people, because they have heard that thinking applied to other diseases,” Dixon said. “The biggest challenge at this point is that, from what I understand, there is no cure. We’ve just got to try to encourage people. There may be no cure at this hour, but let’s still get involved and let’s see what happens down the road.”

Kitta MacPherson is an award-winning journalist whose writing has been syndicated nationally. She worked at The Star-Ledger of Newark as its science editor for more than two decades. She teaches journalism at Rutgers-Newark and writes about science and technology.