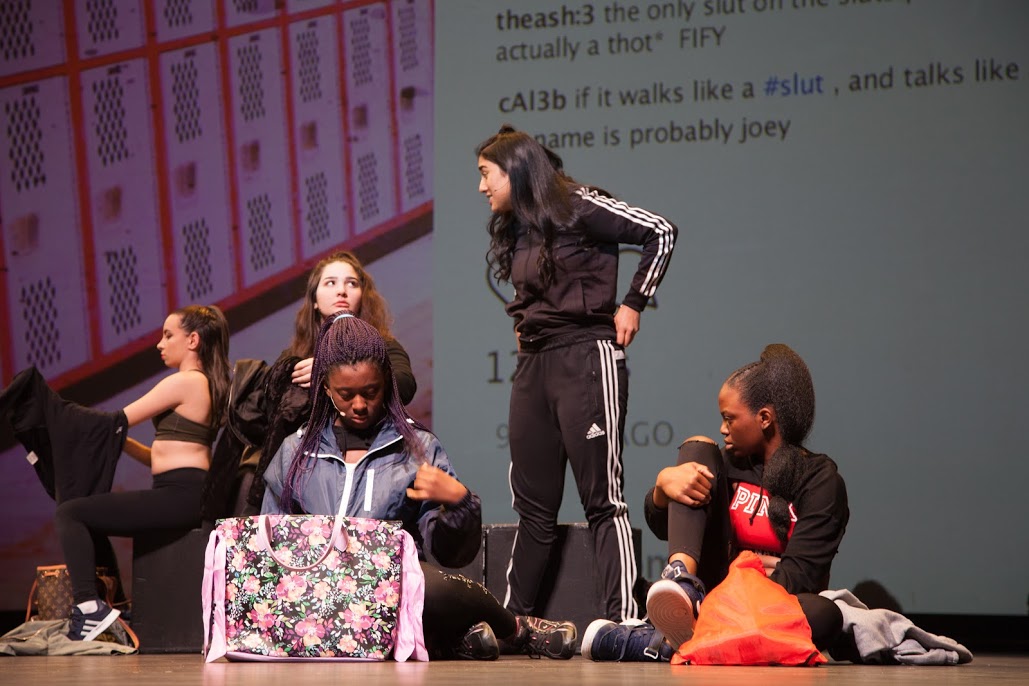 Teenage girls from the tri-state starred in Slut: The Play at NJPAC. Photo by Yasmeen Fahmy

A couple weeks ago, I finally read Queen Bees and Wannabees by Rosalind Wiseman. It’s the book that the movie Mean Girls was adapted from and offers good information about the realities that girls face growing up.

Wiseman’s book is a product of her classes, ones much like the one parodied by Tina Fey in Mean Girls, which promote engaging with teenagers by listening to them. As a text, her book was physically open to girls’ thoughts without censorship. Their voices punctuate it both as editors and speakers. Wiseman basically suggests that if your kid isn’t talking to you, make sure they’re talking to someone. It was the most practical parenting book I’ve read so far.

I was happy to read it as the parent of a young child who hasn’t yet reached that stage, but I also regretted not reading it when I was a teenager myself. By the time I picked it up, it was already in its third version adapted to the world girls currently face with current social media trends. My generation had AIM and eventually Myspace, but none of this new stuff. Still, I needed that message (and so did my parents) back when I was thirteen.

I felt something similar while I was watching Katie Cappiello’s play SLUT (2013), directed by Betsy True, last week at NJPAC. I could sense, throughout the evening, that I wasn’t the only one in the audience who was happy for the people in the play for having access to this type of dramatic activism. I wondered what it must have been like for these teenagers to be in a girl-centric theater production. It took me until college to truly critique the sexual politics I grew up on. Watching these high schoolers reminded me how lost I was when I was their age.

SLUT follows a fictional group of girls in a dance group, who playfully call themselves “the Slut Squad.” One of the members, sixteen-year-old Joey, played by professional actress Al-Nisa Petty, is raped on the night of a house party. Her victim statement to police takes hold of the narrative for most of the play. Meanwhile, the other characters continue their lives on the other side of the stage, but not without gossip about that night on the tips of their tongues.

Cappiello’s play was, like Wiseman’s book, basically co-written by teen actors from the tri-state area. The version done in Newark was true to the region, thanks to input from the girls. They added the accusation of being “fast-tailed” to the play, which stood out alongside girls’ reclamation of the word “slut.” And despite the serious nature of the play, humor and popular culture were also predominantly featured. Destiny’s Child, Khia, Cardi B, Amber Rose, and Michelle Obama all had relevance in the social dynamics of the production. Timely digs at Bill Cosby and R Kelly made their way in too. The play was immediate in its politics.

As is traditional for productions of SLUT, the whole cast was comprised of girls. Under the direction of True, boys only existed as bodies projected on the screen upstage during a party scene. That huge screen was a site of dynamic intimacy. It was the same screen that, when in Joey’s room, projected her Macbook video chats with other girls. It also displayed various Instagram screenshots and a close-up of Joey’s face during her statement. Privacy didn’t exist with that unforgiving screen (much like the ones we’re all holding) hovering over the stage. 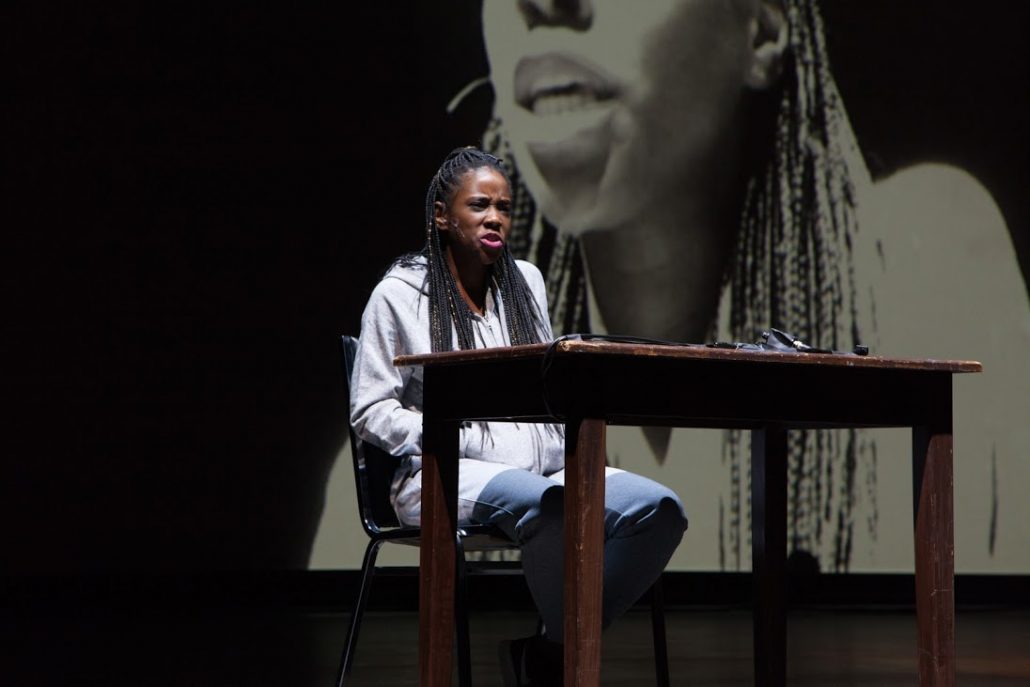 The stage itself was also physically doubled. It was mostly bare, except for a couple of props: a bench on one side and a table and chair on the other. The bench transformed from locker room bench to bedroom furniture, but the table and chair were reserved as one side of an interrogation room. The stiff symbolism of the desk just waiting for Joey before the rape happens is eerie. When she said that, yes, she wanted to give her statement without her mother present, I worried immediately. Not only was she uncomfortable talking around her mother, but I also knew that the system wasn’t going to protect her.

I had to wonder: who are girls safe around?

This split-screen stage reflected language as well. A few times, Joey would say one line, like “no, but seriously”, and a girl stage right would mirror her speech, saying the same thing. It was as if they were talking to each other through repetition, although they were disconnected by time. That echoed structure changed most dramatically in the last scene. Another girl explains how she was raped at a college party as a high schooler, although she’s never told anyone before. In the last line of the play she turns to face Joey, telling her, “I believe you. I wanted to tell you that.” Then they look at each other, effectively breaking the metaphorical barrier between them onstage.

Breaking down barriers through conversation is really at the center of both Cappiello’s play and Wiseman’s book. This production ultimately modeled the open dialogue both texts promote. True informed the audience at the beginning that there were social workers around during each rehearsal. She added that they were also available to the audience during the play, if needed. The cast took questions as the end too, wherein one actress admitted to becoming less judgmental of women since participating in the production, while the girls beside her nodded in agreement.

There was a similarly communal effect on those watching, especially for those of us with kids—luckily, mine wasn’t the only one there. Another mother stood with her three young children to say she wanted her daughter and sons to watch the play so that they would all know what “no” means. Everyone applauded at the real extension of dialogue that was reaching far beyond the stage.

But it was especially refreshing to see an entire stage full of girls and women. I don’t think I’d ever seen that before. I sat in my seat and absorbed the experience during the Q&A with the actors, poets, social workers, and director—all women—simply mesmerized at the sight of them as a group. If that’s the only thing my son saw that night, then that would be enough.

Newark’s Lauren Craig on turning her Wendy Williams moment into a women’s...
Scroll to top