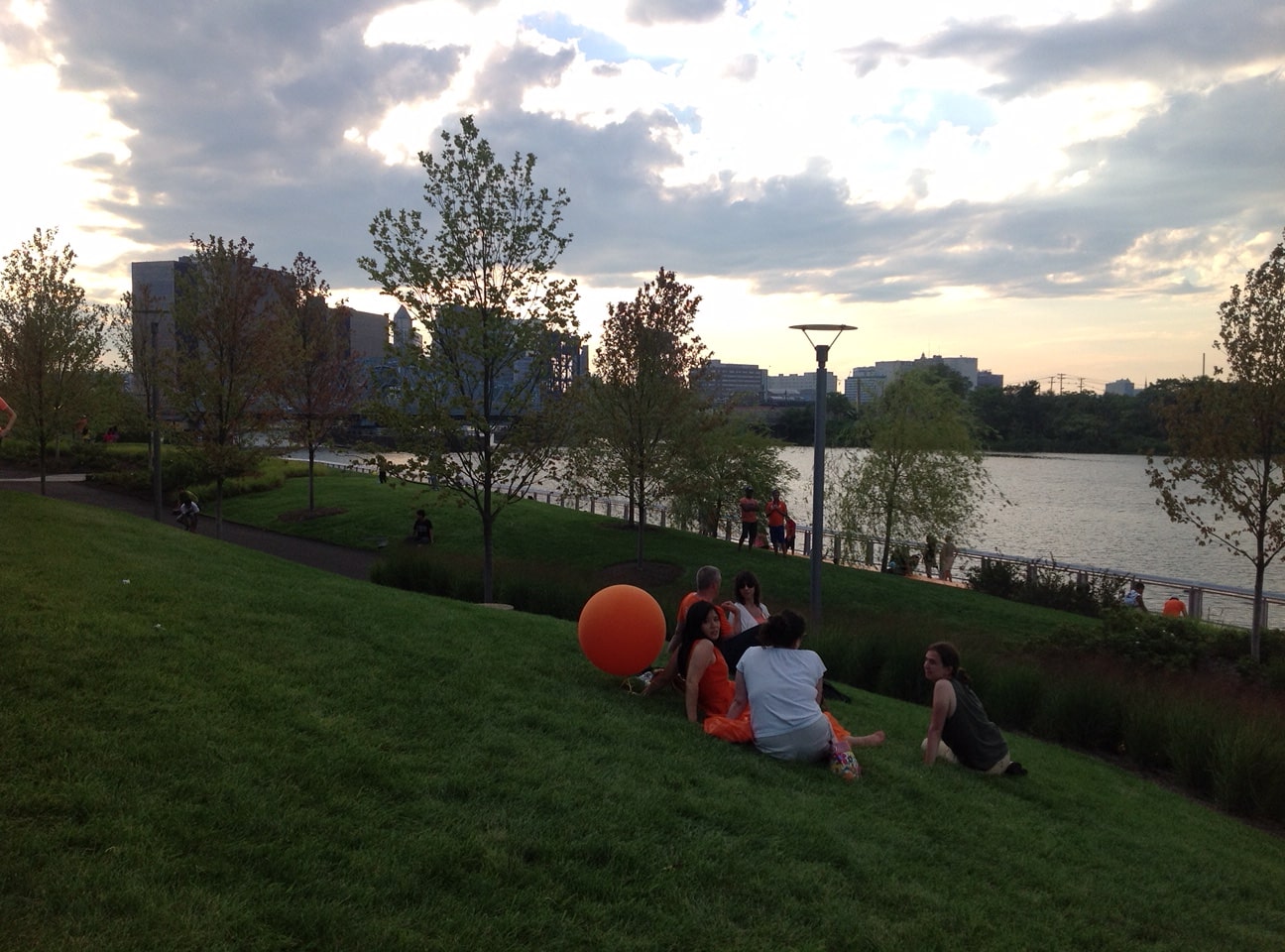 Sitting on a bench in Newark Riverfront Park right next to the trademark orange stick sculpture, Marcy DePina is all smiles as she takes in the scene on a hot and humid summer day. Watching skateboarders ride along the park’s bright orange boardwalk, mothers walk with their children, and park goers work out in the sun, DePina realizes that after decades of a community advocating for access to the river, their wishes are finally being fulfilled.

DePina is Executive Program Director for Newark’s Riverfront Revival, a non-profit organization whose mission is to connect Newark residents to its river. Since 2008, Newark Riverfront Revival has taken thousands of people on walking and boat tours, hosted outreach events, and designed educational programs for the youth.
“We want people to know that this is your park. The park belongs to all of Newark’s residents,” DePina said. The park “really speaks to the power of the people,” she continued. “Sometimes change happens, sometimes it [doesn’t], but this park is a beautiful example of people standing up and saying that, ‘We want our river cleaned up; We want to have access to our river; We want more green space in our neighborhood.’”

The Passaic River is where the indigenous Lenape caught fish, turtles, shellfish and hunted for deer, turkeys and bears near the river’s edge before European colonization. During 18th century, the Passaic River was a magnet for economic development, attracting major factories and industries to Newark. After centuries of pollution the lower part of the Passaic River, a 17-mile tidal stretch that runs from Dundee Dam in Clifton to Newark Bay, became contaminated with pollutants such as mercury, dioxins, PCBs, and other toxic contaminants. Exposure to these contaminants may have long lasting health effects on people, especially women of childbearing age, nursing women and women who are pregnant.

With its ignominious reputation as one of the most polluted rivers in the United States, the Passaic River’s lower stretch in the Newark Bay was classified as a Superfund site by the  the Environmental Protection Agency in the 1980’s. The history of the Passaic River and Riverfront Park is documented throughout 12-acres on replicated logs and on other postings in the park.

“New Jerseyans and Newarkers often talk about pollution. We talk about things that smell, but we don’t dig deep enough to know the reasons behind that, so that set me off in wanting to know more. I wanted the younger generation to be aware of what happened, but also get involved in the process of cleaning up the river,”  said DePina.

The revitalization of Newark’s riverfront is part of a campaign to attract people back to the river by using a variety of free art and cultural programming that includes kayaking, river boat tours, dance music nights, and yoga. Newark native and yoga instructor, Sakina Williams, understands the importance of water and community, which is why she chose to hold her yoga classes during the summer at Riverfront Park. “For me personally, seeing water when I meditate and when I’m practicing yoga is important,” said Williams, adding that “seeing activities around water helps to connect you to yourself and to the environment that you are in.”

In addition to having access to green space and the Passaic River, where the community can connect to nature and each other, the revival of the riverfront may lead to economic opportunities for Newark residents looking for jobs and entrepreneurs who want to create their own businesses. Aisha Glover, President and Chief Executive Officer of Newark Community Economic Development Corporation (Newark CEDC), believes the improvements to Newark Riverfront Park will offer Newark residents economic incentives. “I would love to see an active waterfront where people—workers and residents—come out and gravitate to play, celebrate, [and] relax in the same way you go to Brooklyn Bridge Park or Liberty State Park. There are a tremendous number of opportunities for people to take advantage of the city’s assets. I think the park is going to [help] attract even more people [to the city],” said Glover.

Newark CEDC’s Vice President of Economic Development, Jorge Santos, said the city will building some amenities to enhance the experience for park goers and local entrepreneurs. “We’re expecting to build out some kiosks, which are supposed to look like orange shipping containers to evoke that feeling of the port. These are going to be work spaces where we are going to have vendors selling food or ice cream—different things that you would expect to see on a boardwalk—and we are going to have opportunities for those vendors to apply and be able to create jobs,” Santos said.

Although time has not been good to the Passaic River water quality,  change is coming with the help of environmentalists, local and federal agencies, and concerned  citizens. DePina also noted that several groups, such as students from the Passaic RIver Institute and neighboring corporations like Nestle and Panasonic, volunteer their time to help clean up RIverfront Park.

The EPA’s plan to clean up the Passaic River will roll out in several phases which, with the help of local and state agencies and community groups, are already underway. DePina is pleased about plans for both the environmental restoration and her ongoing programming. She thinks the river is residents’ birthright. “[Riverfront Park] is a space where you can come and reclaim your connection to the earth,” she said. “You can come here and reclaim your space in the city. You can come here and reclaim a peace within.”