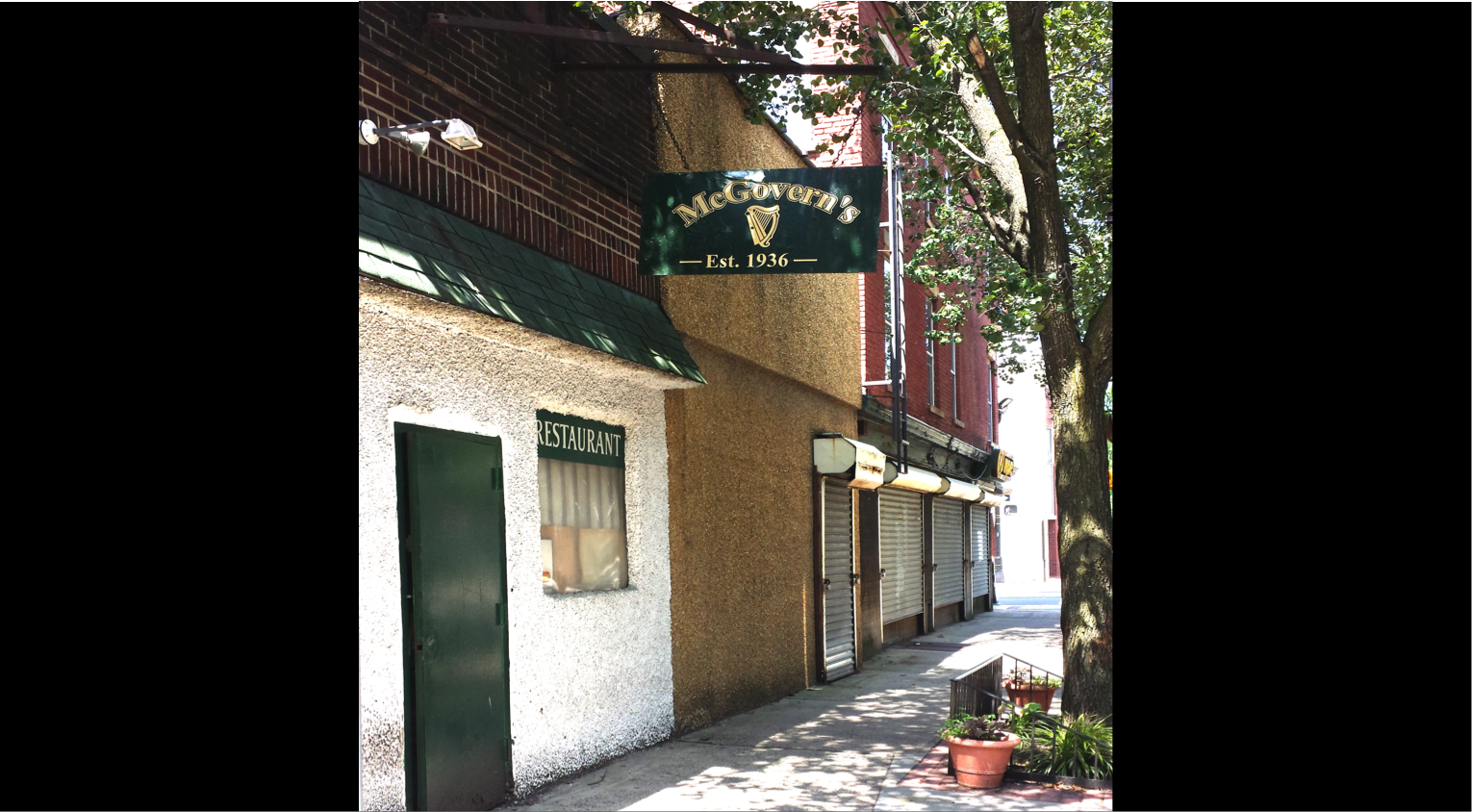 McGovern’s Tavern first opened its signature green doors in Newark back in 1936. Nearly 80 years later, the pub continues to reinvent itself while maintaining its storied past.

A new patrons will likely be drawn to the display of helmets hanging from the ceiling. McGovern’s gathered the collection over the past 20 years from former police officers and firefighters who have visited the bar and become part of its extended family.

In fact, family is an important theme at McGovern’s, and the establishment has managed to stay in the family for three generations. Most of its employees are either blood relatives or have been longtime, close family friends.

Bill Scully, who once owned the bar with his wife, Maura, is the uncle of one of the current owners. He is literally the face of McGovern’s, as his visage appears on the tavern’s coasters along with the words “In God We Trust. All Others Pay!,” the slogan he created in the course of his 50-plus years working at the bar.

It’s probably that sense of family that has cemented McGovern’s as a fixture both in Newark and in the extended community. The bar has established fundraisers for people in need, and raised annual scholarship funds for local kids to attend college preparatory high schools. According to its owners, these are just a couple of the ways McGovern’s gives back to the community that has supported them for eight decades.

The Irish pub is known for its burgers, delicious fries, and other freshly prepared menu items, and is lauded for a great pour of Guinness. It’s a place to see for Newark visitors and natives alike who are looking to enjoy a drink, have some food, take in some of the history of Newark, or do all of the above. At McGovern’s, history is present: pictures, signs, and clippings cover the green walls of the bar, providing an ever-present visual link to the past.

But make no mistake: McGovern’s isn’t a museum. Whether it’s the latest sporting event being shown, the sounds of live music performances filling the bar, the latest installment of Trivia Tuesdays, or beer pong night on Thursdays, McGovern’s is all about making the bar as fun and user-friendly as possible.

Despite operating through the Newark riots of the 1960’s, the economic decline of the 70’s and 80’s, and now the development in the surrounding downtown Newark area near McGovern’s, the interior of the Irish pub has seen only subtle changes. The bar has made a few updates to make customers more comfortable, like widening the doors for easier access, adding a projector and screen for viewing sports, and investing in a satellite jukebox to accommodate all of their customers’ musical tastes.

“It’s a place that, if you’re in Newark, you have to see,” says Sean McGovern, one of the current owners of the pub. “We’re an oasis, where you can come in, get away from the daily grind, and meet a variety of different people – whether it’s students, judges, painters, cops, or firemen – and get a real feel for Newark.”

So go down to Washington and New Streets and check out the only bar in New Jersey to make Esquire’s list of the Best Bars in America.