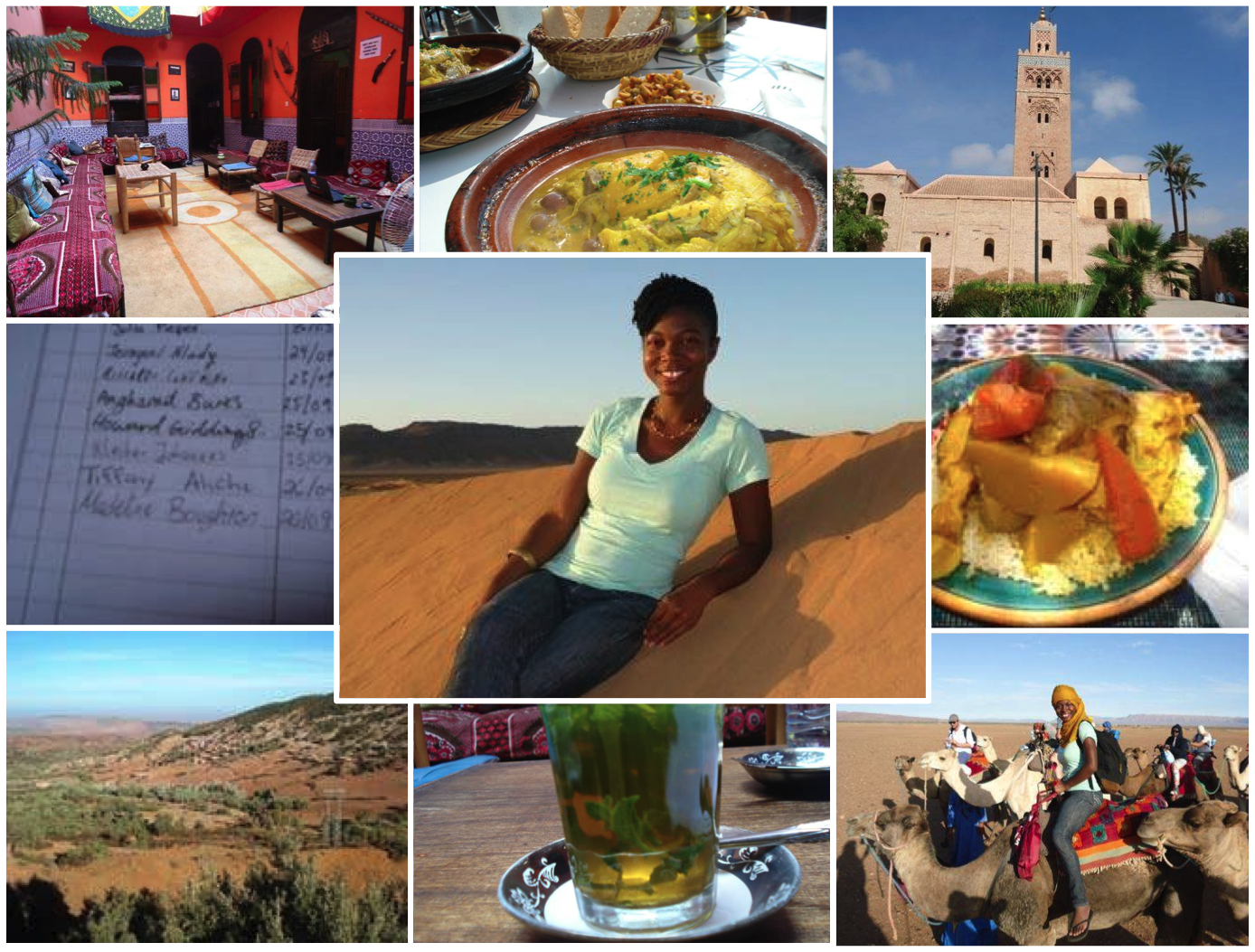 I needed a break from the US and decided to visit one of my new favorite places. I booked a ticket to Marrakech, Morocco, where I’d spent a week a year ago for a wedding. I was able to explore, taste, see, do. The city is not for the faint of heart. It’s bursting at the seams with tourists, peddlers, snake charmers and the like.

I scheduled a tour to the Sahara desert directly with my hostel, Mama Marrakech. I made a quick phone call and was told I’d be picked up the next morning between 7 and 7:30am, and that breakfast would be ready before then. Probably due to excitement, I woke up on my own around 6:30. I had already packed my bag the night before.

A delicious meal of flat bread drenched with honey, fried eggs, a biscuit and mint tea was served. Me and two other travelers discussed what clothes we had packed. What does one wear when riding a camel? We had no idea. We just assumed some type of long pants.

After about 7 hours of driving, sightseeing and bathroom breaks, we could not have been more relieved when our van pulled up to a caravan of camels resting and guides dressed in gandoras and turbans. This was the moment we had all been waiting for! I couldn’t wait to ride a camel through the desert.

Mounting the camel was quick and without ceremony. The guide said, “Hold on here. Squeeze.” A command was given to the camel and he rose on all fours. I was up high — camels are tall! I grinned with excitement but also held on for life. We thanked our driver and were off.

My travel buddy said, “You know we’re not in America, because there was no disclaimer.” I agreed. We joked that if we were in the US we would have had to fill out multiple release forms and emergency contact information. At minimum we would have been given some emergency words. I thought to myself, “How do I say STOP in Arabic? What’s my guide’s name? How do I say HELP?” Well, this was Africa, not America. No worries. And thankfully, I didn’t need to use any of those phrases.

During the ride, we all photographed the beautiful mountains, sand dunes and each other. Earlier I was holding on for dear life, but by the end I was snapping selfies! We gave our camels names. I named my camel Aziz. I thought it was appropriate, and I’ve always liked that name. Aziz was obedient, and we had a pleasant journey through the desert.

After a couple of hours we arrived at our camp site. The tents were different – much better than what I was expecting. It was dusk when we arrived. We were told we could come into the large tent with everyone. I saw shisha (hooka) and asked if they were going to smoke. The guide said yes, and that there was beer in the tent. (I later found out this was a joke; most Moroccans don’t drink alcohol. Neither do I, so I wasn’t disappointed.)

Our guide poured us mint tea, and we all said cheers. Everyone was asked where they were from and what languages we spoke. I was very impressed that many people in Morocco speak Arabic, French, English, Spanish, German and likely other languages. They will collect tourist money in any language you speak! Outside the tent was a fire, and the guides sang and played drums. I laid down to watch the stars. I have never seen so many. I actually saw shooting stars. It was beautiful. Breathtaking.

We rose early to watch the sun rise. I was completely in awe. It really is a bit indescribable. It was time for Aziz and I to head out of the desert. I was saddened to see the vans waiting for us in the distance. My dream trip to the desert in Africa had come to an end. I said goodbye and thank you to the guides in Arabic, but not forever. I will be back. I returned to America with a new sense of peace. The desert is bigger than me, and all of my menial stressors back home seemed to dry up and float away with the wind. This was an unforgettable journey. I think everyone should do it!

Go to the Moroccan desert. It will change your life.

P.S. Check out more of the photos from my trip on the TravelingMad Facebook page.

TravelingMad is a Newark native and world traveler. Follow her on Facebook and Twitter, and be sure to read her Street Style & Profile feature by Citi Medina.

From the BCL vault: Power restored after Hurricane Sandy, Halsey Street stalwarts get back to work

Tim Dingman: Why do we make art?