Newark will soon be home to a brand new biergarten.

The team behind Redd’s Bar & Restaurant, the family owned-and-operated restaurant located in Carlstadt, New Jersey, is currently putting the finishing touches on Redd’s Biergarten. The 7,000-square-foot beer garden and restaurant is scheduled to open downtown Newark this spring, with entrances at both 220 Market Street and 37 Edison Place.

The location, which partner and executive chef Dan Palsi said was once a speakeasy, will join a pair of restaurant rows that includes Taste Venue and Edison Alehouse on Edison Place, and Dinosaur Barbecue, Mercato Tomato Pie, Novelty Burger and, a little further down, Fajr’s Seafood on Market Street.

Step inside today, and the place still bears the hallmarks of a restaurant-in-progress: the smell of wood shavings, the sounds of construction (complete with a boom box blaring classic rock), and the sight of bar taps and soda dispensers still wrapped in plastic.

But the shape of the soon-to-be-finished space is already coming well into view. When it opens this spring, it will resemble a traditional German beer garden, complete with both bench and high-top communal seating meant to foster interaction, a walkup bar, a seated bar, large statement murals, a cavernous festhalle, and additional communal seating in a smaller, more intimate bierhalle. It will also feature the usual modern touches, including 14 flat screen televisions and digital menus posted throughout the space. In terms of the experience itself, Palsi said customers can expect “beer, food, wine, and hospitality.”

Although Redd’s Biergarten’s management plans to cultivate relationships with Prudential Center, located just across the street, and other entertainment venues in the neighborhood, it’s a space that its principals hope can become an attraction unto itself.

“This place will have an urban feel, but will also be very German,” said Palsi. The interior will also be localized: in addition to all its Bavarian trappings, it features an homage to Newark’s first responders, and will soon feature a super-sized mural touting Newark’s extensive beer and brewing heritage.

Palsi is a classically trained chef out of the Culinary Institute of America, and spent three years working in Germany in the 1980s, including an 18-month culinary externship in Munich (where he was joined for a time by lifelong friend Frank Pinto who, along with Dan Palsi’s brother, Doug Palsi, is also a Redd’s Biergarten partner). In addition to being able to rattle off German terms in what sounds like an authentic accent — at least to an outsider — he’s also steadfast about infusing the venture with as many authentically German features as possible.

Ironically, Redd’s Biergarten’s Newark location will also represent a homecoming of sorts. “We used to be the [New Jersey] Devils’ hometown bar,” said Palsi, who is the son of John Palsi, “the original Red” (so nicknamed for the color of his hair). The elder Palsi owned The Halfway Bar and Grill in Carlstadt, saw it transform into Redd’s Bar & Restaurant under his son Doug’s leadership and, now in his 80s, can still be frequently found at the restaurant alongside his wife — and Dan and Doug Palsi’s mother — Tootsie.

“We were looking at this street [Edison Place] back when Brick City Bar and Grill was still here. We watched over the years how the city of Newark did with this area, and we made a move when the timing was right,” Palsi said.

Palsi added that they’re not taking success in Newark for granted: under his brother Doug’s customer service and relationship management leadership, they plan to earn a loyal following by keeping their eyes peeled for ways to attract a customer base, and then deepen the restaurant’s relationship with those customers. Redd’s Bar & Restaurant grew its business in part by being aware of, and responsive to, the contours of its location and the needs of its customers.

“MetLife stadium is close by, but the walk isn’t very safe, so we started busing people to the games five or six years ago,” he said. Their shuttle service is now a cornerstone feature of their business model.

Their proximity to Prudential Center won’t make the exact same type of service necessary — the arena is literally a stone’s throw away — but Palsi said the partners are already thinking about how Redd’s Biergarten can use their assets to sow success in other ways here in Newark. One idea: leveraging their fleet to shuttle people to the restaurant from shows at NJPAC and Red Bull Stadium. “We’ll see what the needs are,” Palsi said. “At the end of the day, we’re looking to forge real customer relationships.” 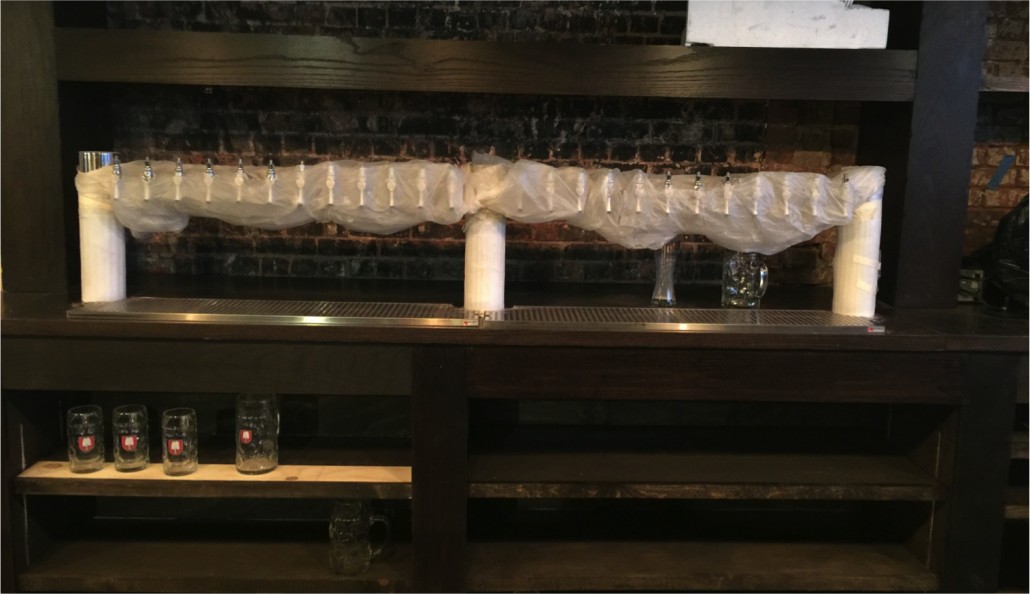 The Redd’s Biergarten team also believes they can forge customer relationships beyond arena dates, specifically with nearby office workers, neighborhood residents, and residents and visitors throughout the city and broader region (the partners plan to open seven days a week). Palsi said the communal-style seating and sharing platters on its menu could make it ideal for offsite team meetings, while their catering service will provide a more customized experience. Their $10 lunch specials and pickup ordering system are meant to make lunch a quick affair. And Redd’s Biergarten’s happy hour will run a full five hours – from 3 p.m. to 8 p.m. – and offer $5 fare to crowds coming in during late lunch, after work, and dinner hours.

They also hope to use their menu as a gateway to relationship building with a broad array of restaurant goers. “We’ll offer a diversified menu with something for everyone,” Palsi said. The menu will be anchored by traditional German food including Bavarian pretzels, potato pancakes, spaetzle (a German noodle dish), schnitzel (a breaded pork dish), and a selection of German sausages. But Redd’s Biergarten will also offer a full kids’ menu and tried-and-true bar favorites: wings, angus burgers, salads, wraps, fish and chips, ribs, and the like.

They’re still “feeling out” the beers, although patrons can look forward to a distinct German influence plus a variety of craft and domestic beers on tap. Expect Oktoberfest to be heavily commemorated.

Redd’s Biergarten plans to go big, but also to carve out a very distinct lane among its neighbors. “We want to be known as an authentic German beer garden in the arena district,” said Palsi. He thinks offering a well-defined experience will enable Redd’s Biergarten to distinguish itself, while also adding value to the local restaurant and bar ecosystem. “When each of us wins, we all win,” Palsi concluded.