Burg, the much-anticipated burger joint that will finally open its doors after signing the lease on its Military Park location two years ago, buzzed with its very first patrons on Friday, day one of its two-day “friends and family” preview. The restaurant opens to the public on Monday, November 2nd.

Executive chef and restaurant partner Chris Siversen oversaw the kitchen, conferred with his management team, absorbed feedback, and made time for occasional light mingling with guests while the restaurant’s small army of cooks, managers, and servers hustled to get orders taken and food delivered to tables. But Burg’s well-considered and well-executed menu was the hands-down star of the preview, and the subject of the preponderance of the lunchtime conversations. The consensus: good stuff.

Drinks on tap and a custom cocktail 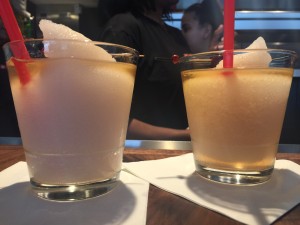 A pair of Frozen Old-Fashioneds.

Upon arrival, I noticed the beer lineup first. In fact, so drawn was I to the taps that I walked clear past the order station just inside the entrance in order to check out the options. Siversen hand-selected the eight beers on tap “because they’re ones that I like,” he told me. By design, not a single top-five beer appears in that lineup: no Bud Light, no Coors Light, no Miller Lite. In their stead is an approachable selection of craft beers, including Founders All Day IPA (ABV: 4.7%), Stone Saison (ABV: 6%), and Ballast Point Sculpin IPA (ABV: 7%), which was my selection for the afternoon.

Siversen said he was also mindful of pairings when curating the beer selection. The Founders, he told me, is a great accompaniment to Burg’s warm homemade donuts, which are available with cinnamon, vanilla, and mocha powder. And perhaps as a testament to the fact that the beers aren’t a mere sideshow at Burg, the bar was manned by a former World of Beers bartender and first-level Cicerone (which is to beer what a sommelier is to wine) named Aaliyah, a Newark resident who was quick on the draw with beer knowledge and recommendations.

And something we don’t see every day: the wines are also on tap. Burg offers a selection of eight wines from keg-wine company Gotham Project, including its signature “The Finger” riesling from the Finger Lakes region of New York.

Customers of legal drinking age can also enjoy the head-turning Frozen Old-Fashioned, a novel take on a classic cocktail that takes a slush as its base and tops it off with a whiskey floater. Brooklyn-based slush maker Kelvin Natural Slush Co. designed the cocktail’s base, which is organic, and gluten-free, and vegan, and non-GMO (Newark, say “Hello, Brooklyn.”). The company’s sales and marketing director, Helena Tubis, stopped by towards the end of Friday’s preview to check out her company’s creation in its new habitat.

They built the burger. Will people come? 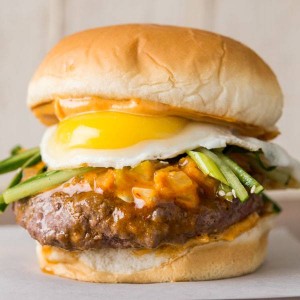 The food menu features ten hand-crafted burger options, each with its own little personality. Half are beef burgers featuring different combinations of toppings and condiments. (My neighbor at the bar tried a medium-cooked burger named “The MP”, which includes grilled onions and “special sauce”. He gave the burger high marks. I briefly lusted after the Korean burger before I spotted the lamb option. It tasted great.) The other half featured roast beef, lamb, chicken, tuna, and a vegetarian option that includes apples, curry mayo, and fried onions. An assortment of salads and sides round out the menu. Co-owner Marc Haskell, who is also Siversen’s partner at Maritime Parc at Liberty State Park in Jersey City, was so insistent that I try the fried pickles that he playfully pilfered his neighbor’s order so that he could offer some to me. I tried them, they were delicious, and I ordered my own.

Haskell also offered more insight into the team’s plans for the restaurant. There will be a walk-up order window in the back, similar to the way Shake Shack is laid out in Manhattan’s Madison Square Park. The outdoor space behind the restaurant will eventually be reservable for private and corporate parties. Jette Starniri, the Vice President of Operations for both Burg and Maritime Parc, added that while Burg’s immediate post-launch schedule will run weekdays from 11 a.m. to 7 p.m., the team will consider longer hours after they’ve gotten a few weeks in market under their belts, and will consider weekends after we’ve emerged from the holiday season.

But will Burg soon see hourlong lines of hungry patrons snaking around the park, a regular scene at Shake Shack’s aforementioned park location?

Perhaps one of the benefits of the restaurant’s delayed opening is that it now launches after Prudential employees have moved into their new digs at 655 Broad Street. It is also surrounded by PSE&G, the New Jersey Performing Arts Center, 60 Park Place and, set back about a block, residential building Eleven80. Regular denizens of the park and patrons enjoying its programming schedule also make for potential customers.

And if the fare becomes legend and word spreads, perhaps Burg will become a pilgrimage destination for locals living and working even further from the restaurant’s leafy immediate radius.