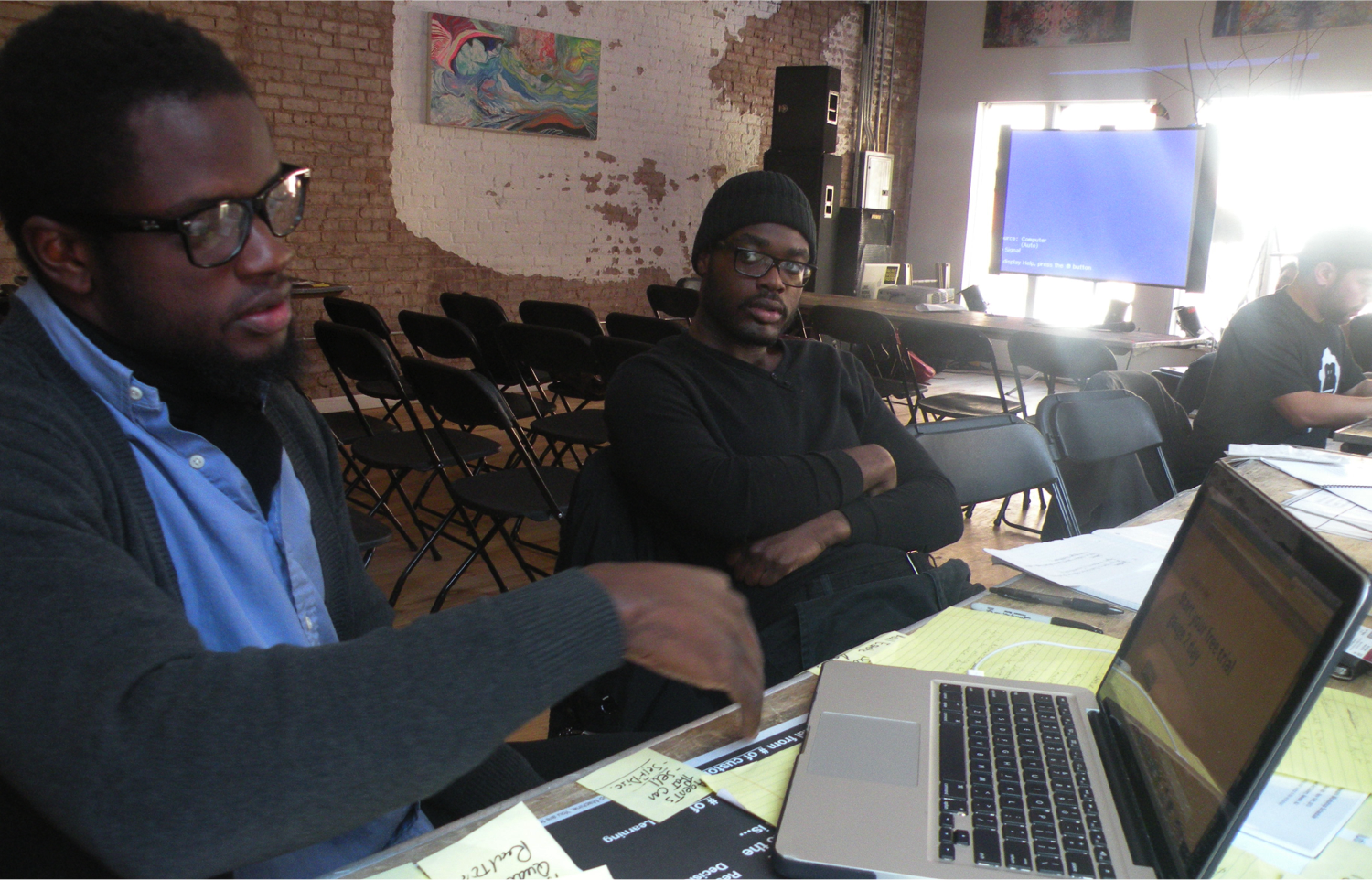 This past weekend in Newark, six three- and four-person teams huddled at Seed Gallery, and fanned out across the city, to test startup business ideas by talking to real-life potential customers as part of the Lean Startup Machine Newark workshop.

Lean Startup is a business and product development methodology formulated by entrepreneur Eric Ries, and entails systematically testing one’s business assumptions about products and customers, quickly discarding bad ones, and homing in on the products and customers that make sense. Workshop coordinators conduct the sessions using a consistent Lean Startup formula wherever the workshops occur.

But in addition to the content of the workshop itself, the entrepreneurs – most of whom were not from Newark – reported that doing the exercise in Newark conferred some added benefits to the experience.

“One of the advantages to doing it in Newark is that you get to see a very diverse group of potential customers,” said Emeka Oguh, whose team won the competition after pitching RescuPhone, a service that would connect smartphone owners without insurance to phones if theirs were lost or damaged. Talking to real-life customers is one of the most important aspects of the Lean Startup experience.

“You avoid the groupthink of VCs in New York who don’t necessarily know the broad cross-section of consumers,” Oguh added.

Oguh and his team got five signups for the service – which doesn’t exist yet – using an online landing page, and pitched a potential customer on Broad and Market Streets who was ready to pay for the service on the spot.

Alizabeth Holland lives in Jersey City, and is currently studying for the bar exam. She said she has a passion for entrepreneurship, and chose the Newark session to workshop her idea – connecting language learners with native speakers online – because it was the closest upcoming one.

But after attending Lean, she appreciated the Newark session for more than just its proximity. “I had no idea you guys have so much of a startup scene happening here,” said Holland, who worked with a team of two other women she met at the workshop that weekend. “I had no idea there were so many people – and specifically young people of color – involved. I got really excited to see that, and I know now that I don’t necessarily have to go to New York for that. I can come two stops” on the PATH train.

Steven Royster, who is the senior tech venture officer at the New Jersey Economic Development Authority (NJEDA), brought Lean Startup to Newark. Royster thought Lean Startup would be an effective way to highlight and cultivate “progressive innovation” in Newark. He also recognized that the sessions would expose Newark’s promise in terms of location, community, and startup support.

“People can connect on the internet, so why would they come to Newark?” he asked rhetorically while most of the entrepreneurs were out talking to customers Saturday. “Part of it is proximity – people coming in got to experience the commute. Part of it is seeing other high-quality entrepreneurs here. And honestly, I think cool spaces where people can have that creative energy – and where they want to work – is key.” The first Lean Startup session was held at NJIT, which is further from Penn Station and has more of an “institutional feel”, as Royster put it, than the loft-style space at Seed Gallery.

Chris Rodriguez and his Lean Startup partner Matthew Nolan, who workshopped an idea for helping small businesses identify customers and bring them through the door, agreed that the setting of the workshop was conducive to working. “I’m glad we’re here because it’s more intimate. There’s added energy to be productive and get stuff done,” said Rodriguez, who has been a Lean Startup mentor himself. “New York events can lean towards more networking than productivity.”

“I’m a Detroit guy,” added Nolan. “I think Newark is a good petrie test case for the way America is.” With access to stores along Market Street, the pair were able to quickly invalidate their assumption about the type of businesses that could benefit from their product, and get closer to identifying the ones that would.

Royster is trying to entice more Newarkers to sign up for the workshops, which cost $100 to $300, depending on when the tickets are purchased. He worked with Brick City Tech meetup organizer Anthony Frasier to host a free startup fireside chat with AllHipHop.com, which is based in Newark, before the Lean Startup sessions began Friday evening. Royster took that opportunity to preview the Lean Startup sessions for the approximately 30 attendees, a majority of whom he said were Newarkers. He’s also considering a monthly Lean Startup meetup, where he would host featured speakers on startup-related topics.

In the meantime, the sessions may have gotten a few entrepreneurs to consider setting up shop here. Though he admitted that factors like being able to raise money here would affect his decision making, when asked whether he’d consider locating a startup in Newark after his experience at the workshop, Rodriguez said, “The short answer is yes.”

Painter Sophia Domeville makes a profession out of her passion

Monday night in Newark: 30 New Jersey entrepreneurs advance in the Start Something Challenge

TravelingMad Postcard: A Night in the Desert

FYI: Are you ready to 'Start Something'?
7 replies