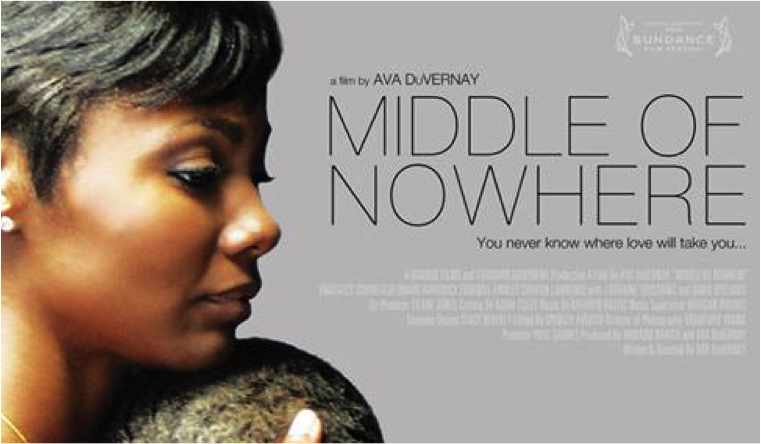 This coming Wednesday, February 26, a group of women from the Newark Sister Circle will screen the independent film Middle of Nowhere at Essex County College, and round out the program with an opening reception before the screening, and a panel discussion afterwards. Middle of Nowhere is an independent film directed by Ava DuVernay, who in 2012 became the first black woman to win the best director award at the Sundance film festival. In the narrative below, Sophia Domeville explains the origin of the plan, and how the group was able to put the event together using their social and professional networks in lieu of a budget.

Late last year, I posted a link on Newark Sister Circle's Facebook page about Mother George, which is a film by Nigerian director Andrew Dosunmu. At first, I wanted to see if we could go to New York to support a film together, but then I thought, "Hey, let's see if we can bring it here to Newark."

I was connected to Pamela Daniels, who was then at CityPlex, to see if we could bring the film here, and both of us were like, "Why don't we do a film screening of Mother George for Black History Month?" We had a meeting with Tracee and Jessica from the sister circle, and Pamela suggested we do a monthlong festival for Black History Month, so Jessica compiled a list of movies that would work for that.

Pamela and Tracee created proposals for the festival, and I combined both of them together, but when we pitched it to ECC (Essex County College) it was already too late to get funding. Since we didn't have a budget, and because of my background as an event planner, I took the lead as event producer to try to secure outside sponsorship.

At that point I said, "Hey, why don't we just screen one film at ECC?" Tracee suggested Middle of Nowhere by African-American director Ava DuVernay — it's a great film that lets us discuss the images of people from the diaspora within the film and media industry.

I contacted a friend from BCDC to help, who then connected me to The Honors Program, a branding and marketing company. I was able to have them be our brand and marketing sponsor. They put together the flyer for the screening, and sent the information to their network of several thousand contacts.

I was able to get a lot of my close friends and network to help by donating towards the film screening expenses. La Vie PR is both my publicist and one of our PR sponsors. I was able to get Phoenix Aficionado, the National Black Front, and Empress Movements to sponsor, as well. My best friend Shauntey Clark is founder and owner a dessert company, Touch of Perfection, and she's sponsoring the opening dessert reception. Hello Beautiful is rounding out the group of sponsors by helping bring awareness of the event to their networks.

Initially, the licensing fee for the film was $500, but I notified the licensing director at AFFRM to let them know we were a small group of sisters from Newark with no budget, and she cut it to $250. Thanks to my supportive network, of close friends, women from the sister circle, and my sorority sisters, I was able to secure enough donations to cover the licensing fee.

The guest panel speakers are Francesca Andre, an up-and-coming female Haitian filmmarker, Timothy Brown, who is a Newark-based filmmaker, Tahir Jetter, another up-and-coming, Brooklyn-based filmmaker, Newark-born multidisciplinary artist Jerry Gant, and New York Maverick from Affirm. They'll all be discussing the images of people of the diaspora in the film and media industry, so I'm excited. Also, Lisa Marie Jackson, who is the creator and owner of Phoenix Aficionado, will be doing the live Twitter feed throughout the event.

It's definitely going to be all hands on deck for this screening event, and everything was donated by many of the people of Newark!