In case you forgot where you were, giant “NEWARK” lettering awash in pink light. Photo by Andaiye Taylor

Aisha Glover, president and CEO of the Newark Community Economic Development Corporation, can cite figures for days about the positive economic impact of local, independent businesses on a community. Her organization is making that type of impact manifest in Newark.

She would love for you to know, for example, that Newark CEDC provides entrepreneurship training and technical assistance for business owners and aspiring entrepreneurs. Her organization is also the key player in driving business attraction to Newark for companies large and small.

Talk to her about Newark CEDC’s work, and she’s likely to champion the buy local initiative they will be executing with local business sustainability organization Forward Ever in 2018.

Related: Another incentive to shop locally: How about a tax break or rebate check?

Ask how Newark CEDC is making an impact in neighborhoods throughout the city, and you’re bound to hear about the community storefronts the organization has launched in each of Newark’s five wards. Those storefronts help locals incubate business ideas in a live setting and provide a physical touchpoint between those businesses and local consumers.

She can tell you about all of that, and if you ask her, she will. But earlier this month, Glover and her team showed what localism looks like in action. Newark CEDC pulled together dozens of Newark-based vendors to produce a sparkling winter gala as a way to showcase the diversity and skill of Newark-based companies providing a wide array of products and services. 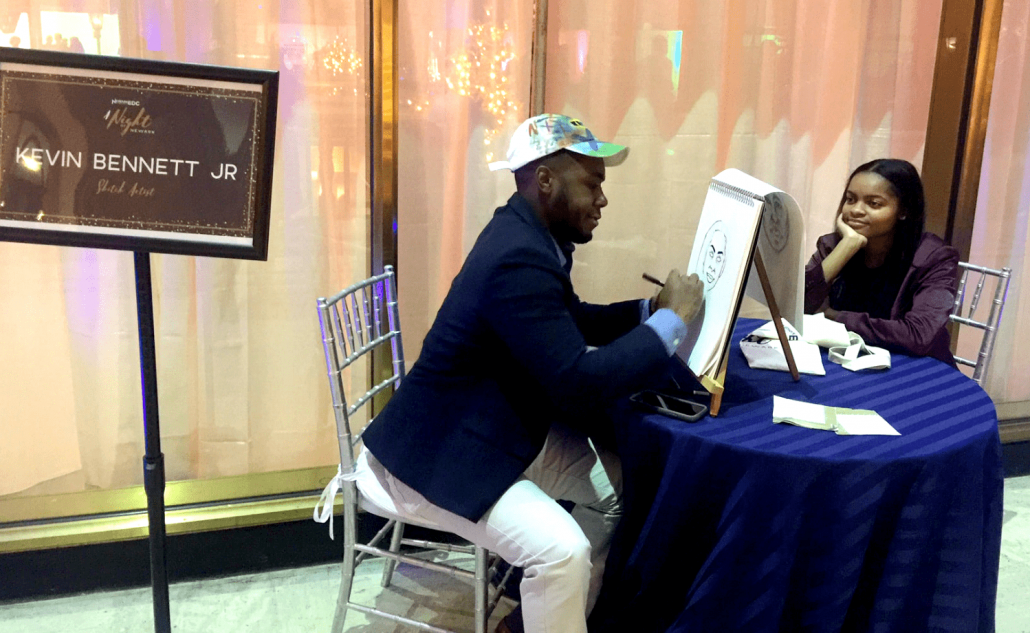 The goal, in addition to recognizing nine people and organizations that have made significant contributions to Newark’s business environment, was to produce a top-shelf event that also created its own multiplier effect.

The positive impact of spending with local, independent businesses on local economies has been demonstrated by reams of research. In particular, spending with local entrepreneurs and firms promotes the circulation of each dollar multiple times within a community.

The impact is even more pronounced per dollar spent with independent local businesses than it is with big box stores and chains. A study by economic analysis firm Civics Economics concluded that 14 percent of spending at chain stores is recirculated locally. That same study revealed that 48 percent of spending at independent local businesses is recirculated locally–even more impact per dollar spent than chain stores. 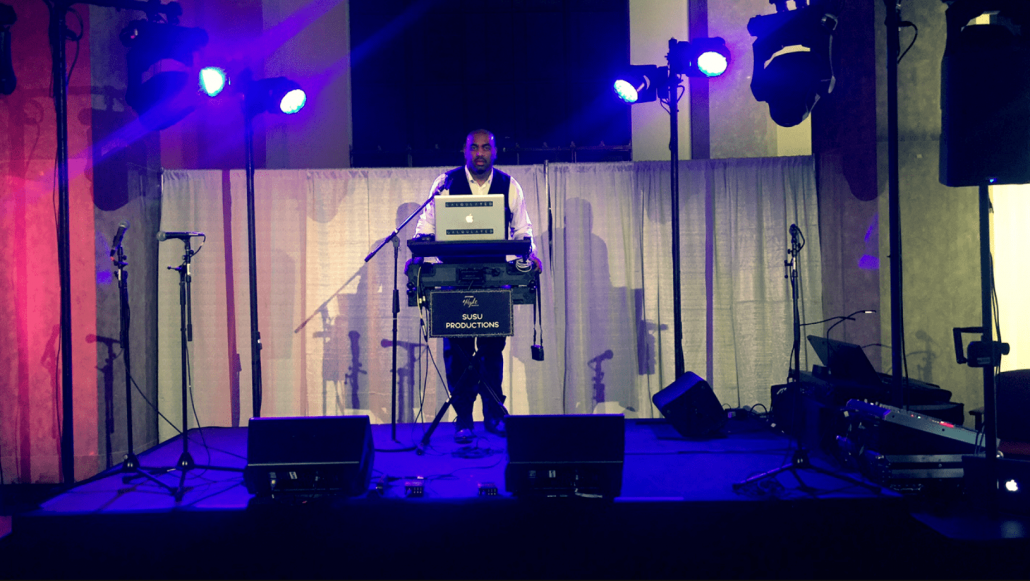 Glover talked about this distinction on a panel for NJPAC’s annual Women’s Association gathering the day before the gala. She said the presence of larger businesses and corporations can help create an environment in Newark where small businesses can thrive, in particular by procuring goods and services from independent businesses. Far from wanting to see Newark overrun with chains, Glover said she wants to create an ecosystem conducive to helping independent local businesses succeed–which can result in a lift for Newark’s economy as a whole.

Part of the solution for making that happen is to attract the right large businesses, and to encourage community mindedness and partnership, said Glover.

And so it was with the gala. Top sponsors included the likes of United Airlines, Prudential and RWJBarnabas, all anchor corporations with large presences in Newark, and all capable of underwriting the event with large checks. Their participation created a foundation on which small, local, independent businesses and service providers could fill out the gala experience, provide necessary services, showcase the breadth of Newark-based businesses and show what they’re capable of. 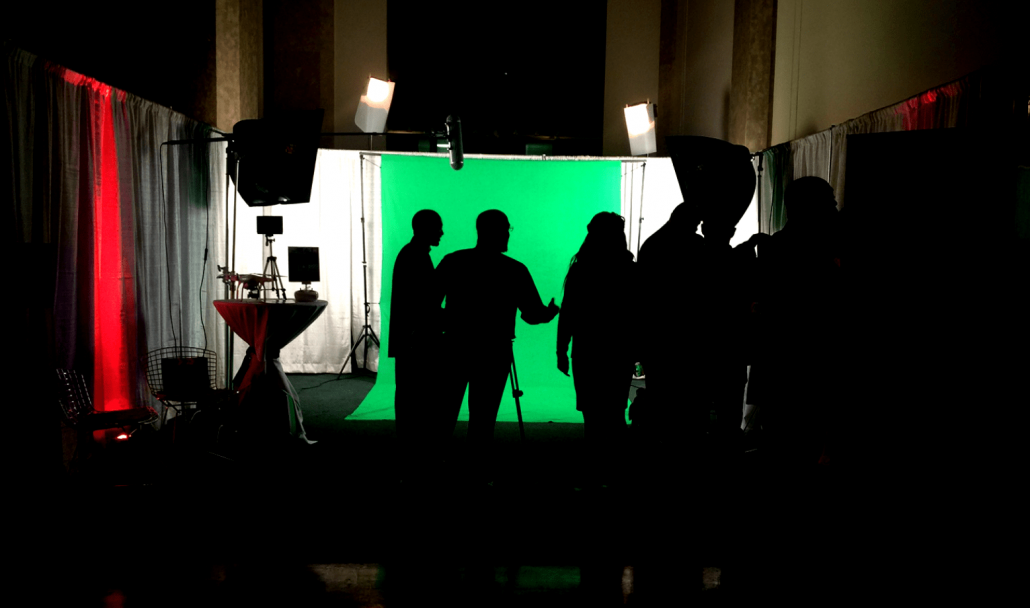 The evening itself was gorgeous: elegance befitting a winter gala, and with touches that were borne of local artistry, creativity and subject-area knowledge about the star of the night: the city of Newark itself.

Newark CEDC secured the mezzanine level of the Newark National Building for the affair. During cocktail hour, entrepreneur and fashionista Lynette LaShawn, co-owner of Off the Hanger Boutique, cut a stylish figure in a living room setup that showed off her store’s home decor collection. The gala, she said, provided a platform to amplify an open secret about what local Newark businesses are capable of.

“Small businesses here are providing top-notch product,” she told me. “We are not arriving; we have arrived.” 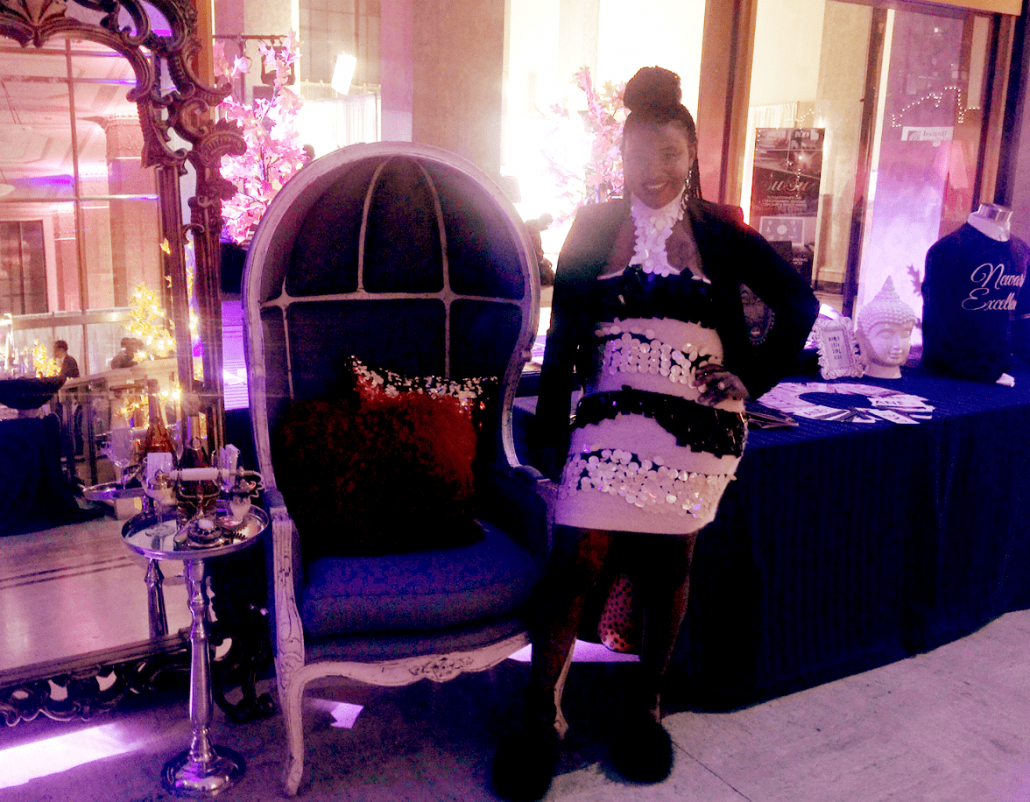 At the west end of the room stood large, pink-tinted “NEWARK” lettering that provided an irresistible backdrop for dozens of do-it-yourself photo shoots throughout the night. The room was dotted with street signs bearing the names of some of Newark’s commercial corridors. In a series of pods directly across from where the gala took place, attendees could give testimonials about the event in front of a miniature green screen setup by SuSu productions, play video games at consoles provided by Newark newcomer Barcade and dance to music being spun by DJ CalQulated. The Velvet Trio and New Jersey Symphony Orchestra rounded out the musical backdrop. 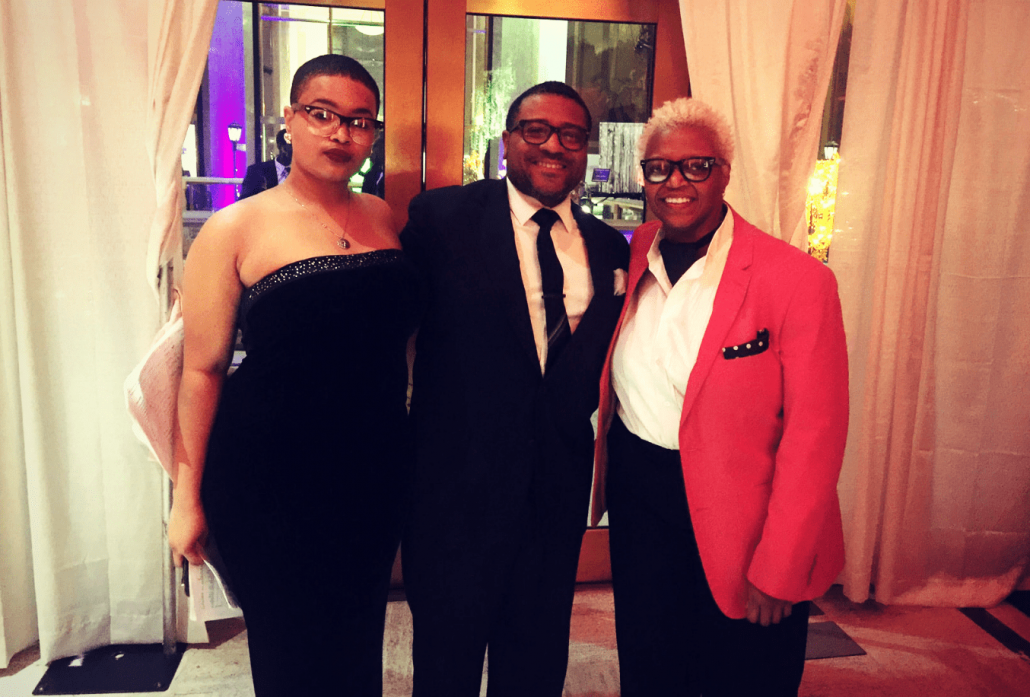 Justin Williams, a university professor and comedian who has hosted Brick City Comedy Revue for five years at Kilkenny Alehouse, provided the opening monologue. (Williams also co-wrote a sketch that aired before Glover took the stage.) He was joined for opening remarks by Lauren Craig, who recently published the book 100 Things to Do in Newark Before You Die, and who also graced the stage throughout the evening to hand out awards to honorees. 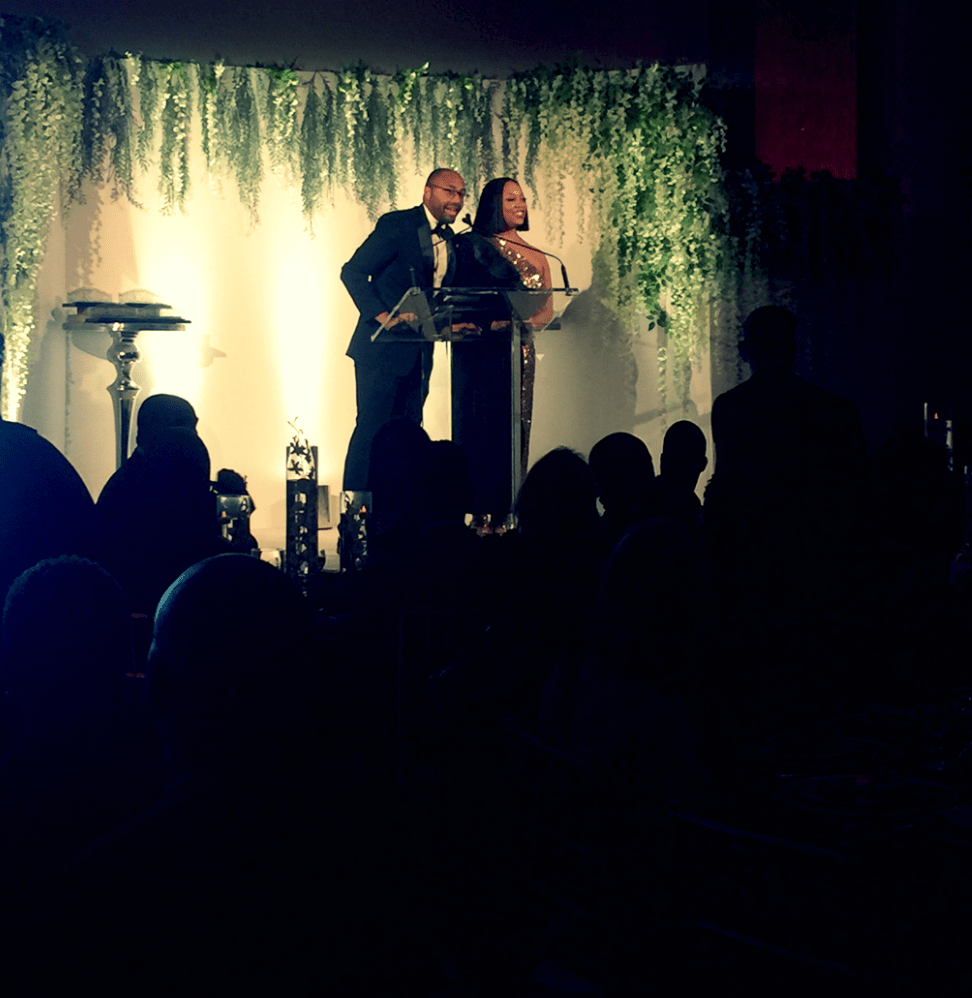 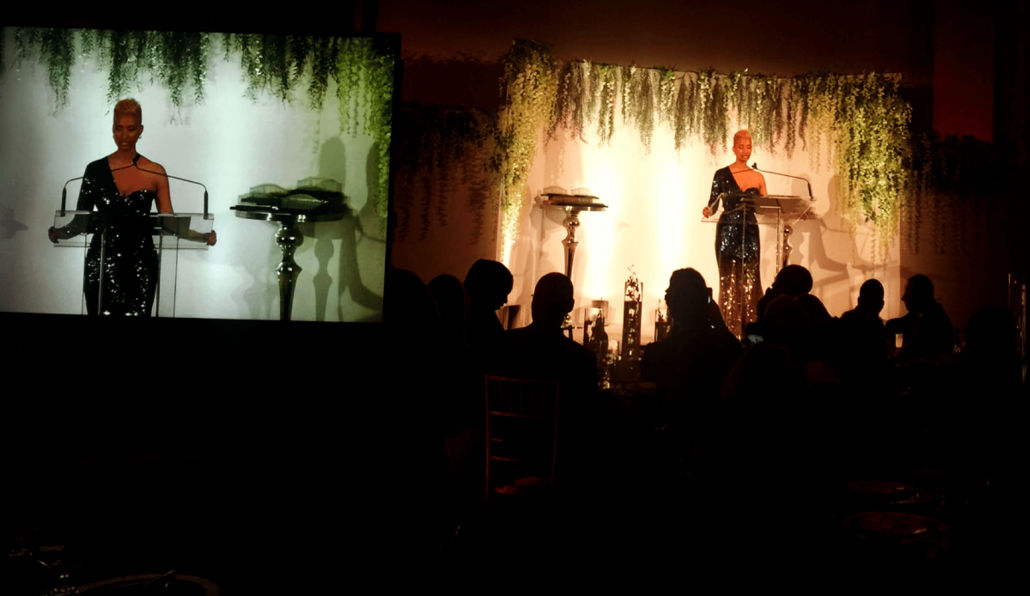 Glover, wearing a sparkling gown by Newark-based designer Marco Hall, emceed the award ceremony itself. Newark CEDC honored nine organizations and individuals for their work over the last year.

After brief remarks by Mayor Ras Baraka, local educator and artist Queen Moore delivered an original poem as the benediction. “This is our renaissance wrapped in mango butter, patchouli and poetry,” she said, articulating a vision for an inclusive renaissance.

“This was a lot of fun,” Craig told me after dinner portion of the event had wrapped. “It was a really easy room because it felt like family.”

I asked Williams how he would describe the evening during a standup set. “It’s the majority minority Oscars,” he quipped.

“We’re in a restored art deco tower in tuxedos. There are captains of industry everywhere. This contradicts the entire narrative of the city. I couldn’t think of a place that’s been more welcoming,” the Missouri native and Newark resident continued.

After dinner, attendees mingled, posed for photographs and buzzed about the evening. Kimberlee Williams, founder of Non-Profit of the Year honoree Forward Ever, whose award was accepted by Executive Director Karen Stovell-Brown, said she was thrilled with the evening’s all-Newark theme.

“Tonight was important to showcase world-class talent that exists [in Newark] that at any moment can be tapped. If you want to do business with talented people, all you have to do is look next door, look to your neighbor,” she said. 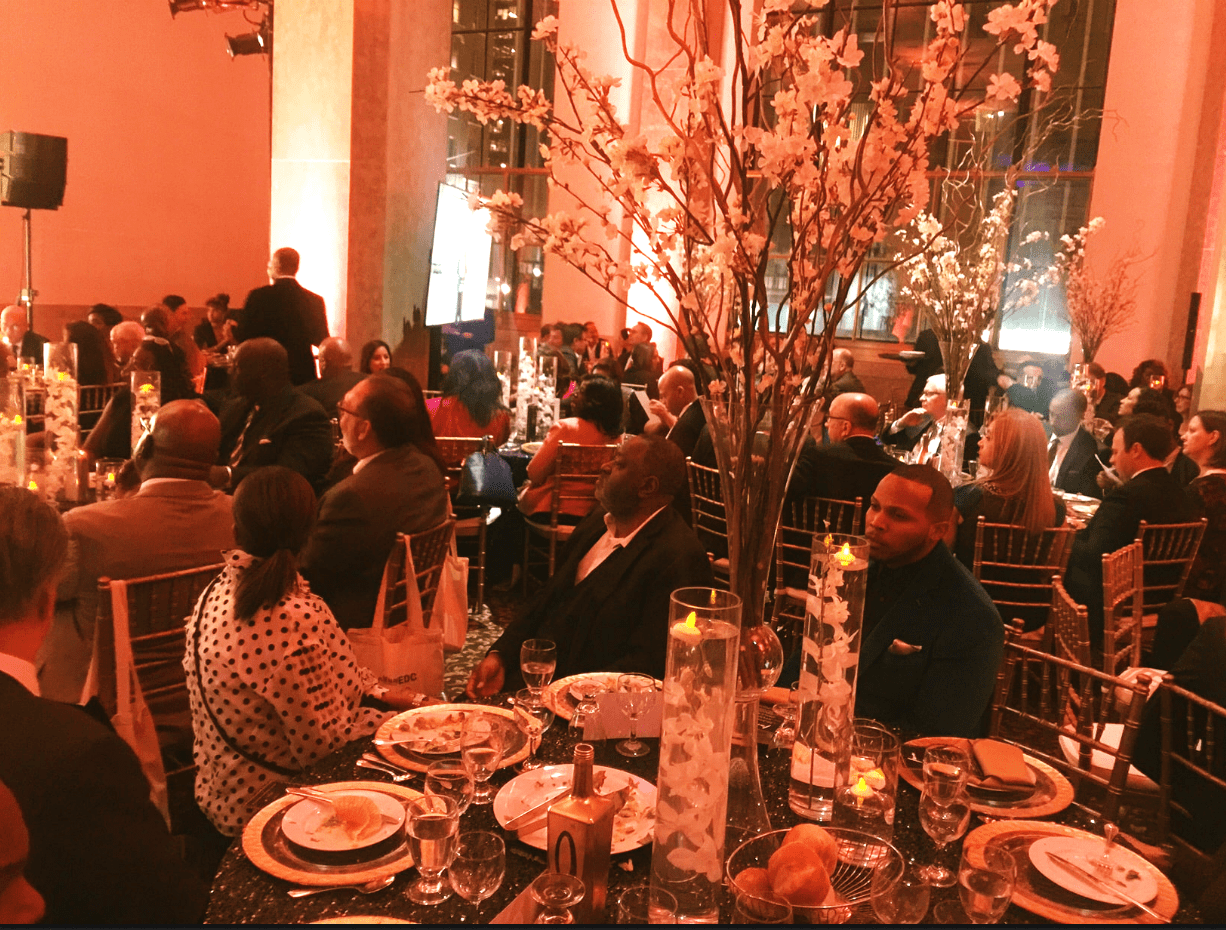 A Night of Newark attendees at dinner. Photo by Andaiye Taylor

Talia Young, owner of 725 Standard, was pleased to have the opportunity to collaborate with other local business owners and talent. “Attendees were surprised at how much talent there was in different areas. And for me, it was really nice to work with other local vendors,” she said. “Aisha has a great vision and the right ‘woman power’ energy to make this happen.”

The gala underscored Newark’s Hire. Buy. Live. initiative, for which Newark CEDC is a major partner. The “hire” portion of the initiative encourages corporations to contract with local businesses as vendors for their products and services.

Before the evening was through, the gala had already produced such an opportunity. “I already got four referrals from people who didn’t even know I did this type of work,” Young said.