In a classroom at Newark’s George Washington Carver middle school on a recent Friday morning, nearly every student’s hand shot up in hopes that the teacher would pick them to participate in the group project at hand.

It wasn’t a math, reading or science class but, in a way, all of the above.

They were participating in “Cook, Learn, Grow,” a culinary program created and taught by Chef Ameer Natson. That day, which also happened to be the morning of the presidential inauguration, the students were making béchamel sauce from scratch, to pair with the homemade fish cakes they would whip up the next week. Over the course of the 45-minute class, the middle school students engaged in an interdisciplinary curriculum infused with reading comprehension, math, critical thinking and even process management principles. 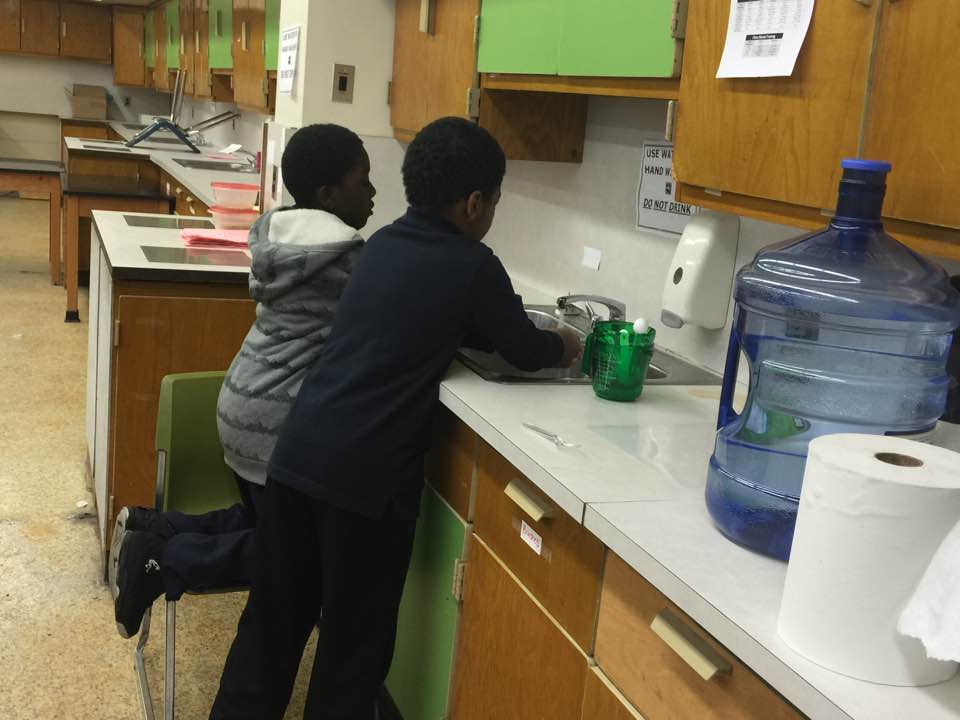 At some points, the underlying academic lesson was well-masked as part of the fun of cooking, as when Natson asked the students to think twice about the sequence of steps they had to undertake to make the recipe properly.

But at other moments, the tie-in to reading and arithmetic became obvious, as when they were tasked with measuring out a quantity of an ingredient there wasn’t an exact measuring spoon for. One of the students exclaimed, her face brightening with realization, “That’s like math!”

Natson is mindful about embedding academic lessons into his culinary curriculum, in significant part, because of what his early exposure to cooking has meant for his life and career.

He got an early start in both cooking and entrepreneurship. His father ran a bakery on Treat Place in Newark. When Natson was 11 years old, his father opened a beauty salon. “I’m going to teach you how to be an entrepreneur,” he told his young son, setting the pre-teen up with a hot dog cart at Clinton Avenue and South 11th Street.

Now Natson, 33, is a classically trained chef–he studied at the world-renowned French Culinary Institute–and has a successful career as a personal chef to the stars. He has prepared meals for actress LisaRaye, music producer Pharrell Williams, comedian Chris Tucker and Beyonce (Natson’s work with the latter celebrity was a particular point of fascination for the students).

Natson still works with celebrities, and has used his contacts to create experiences for his students. During the 2015-2016 academic year, he worked with Andrea Jones, then vice principal of West Side High School, to discuss his experience as a celebrity chef from Newark during a school assembly. From there, he created an offsite cooking program that included him bringing the students along to high-profile catering jobs, among them a birthday party for the son of celebrity couple Alicia Keys and Swizz Beats. 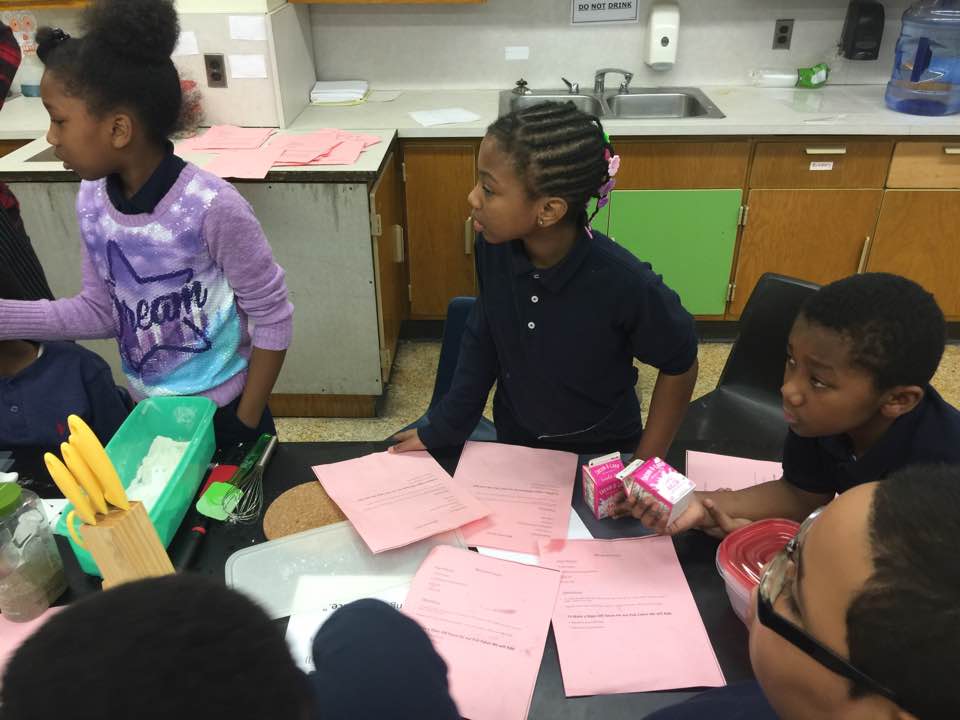 When Jones moved to George Washington Carver to become that school’s vice principal, said Natson, she asked him to start a culinary program there. The resulting program, which Natson dubbed “Cook, Learn, Grow,” sees four middle school classes per day on Mondays, Wednesdays, and Fridays, including two classes from Bruce Street School for the Deaf, a school-within-a-school colocated at Carver. The students use bottled water to prepare their recipes.

Back in the classroom on inauguration day, the students were busy learning some of the “lessons of life,” as Natson later put it, in addition to the ins and outs of creating sauces from scratch. Natson, whose own biography saw him take the fast-money route as a twentysomething, and pay the price for it, is intent on using his program to teach his students to be aspirational and develop sound habits of mind.

As I watched them wrap up their béchamel sauce, some of the students who had been the most enthusiastic about helping to make the recipe swore off tasting the concoction–until their peers gave it positive reviews.

“That’s good!” exclaimed one student, who had been nervous, based on the look of it, that the sauce might taste like cheese.

Students take turns tasting their béchamel sauce. One student gave the sauce positive reviews after realizing it did not taste like cheese. Photos: Andaiye Taylor

Last week, they made their fish cakes. “The recipe calls for Worchestire sauce and lime juice and Old Bay, and the kids thought they wouldn’t like it,” said Natson. The students were delighted to find their homemade recipe tasty.

“A lot of the kids say they don’t like certain ingredients individually, but [then] love it when it comes together”–perhaps a metaphor they will soon find relevant to other areas of life, Natson suggested.

In addition to French cuisine, the students are making recipes that are more familiar for anyone who has attended a kid’s birthday celebration, Super Bowl party, or simply browsed the grocery aisle: salsa and tortillas and quesadillas and the like. In addition to learning raw cooking skills and related academic principles, that experience will enable them to see how they can create for themselves healthier and fresher versions of the type of food they might purchase in a package or be served in a restaurant. 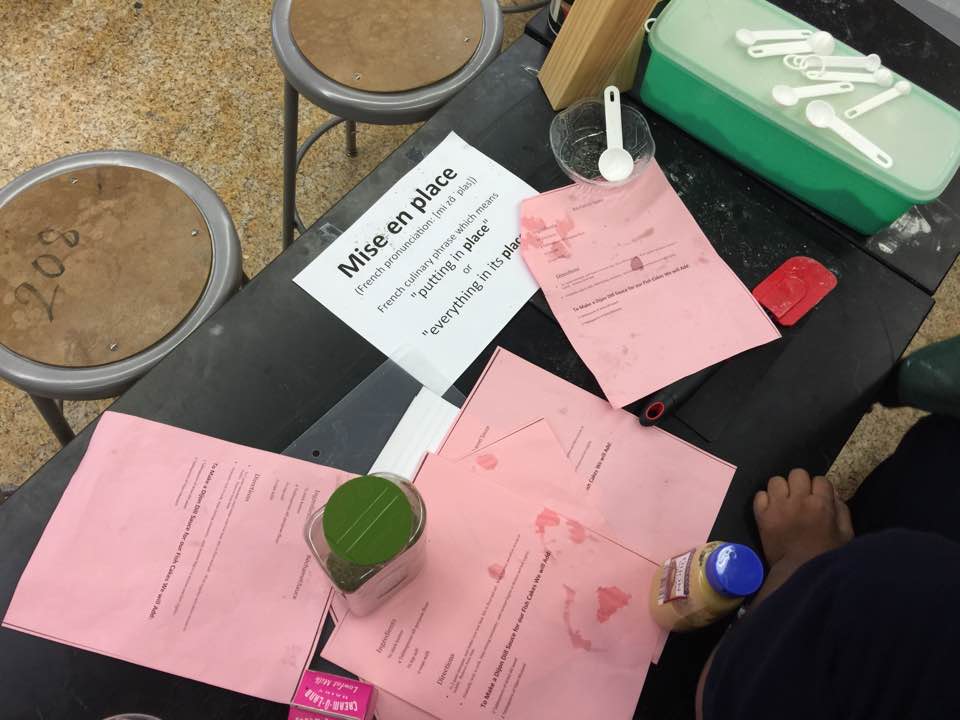 Natson slips French terms and life lessons into his culinary instruction. Here, he teaches the students the importance of “mise en place”–everything in its place–for a well-organized cooking session. Photo: Andaiye Taylor

While Natson works on the “Cook, Learn, Grow” curriculum, which he hopes to expand more deeply within the district next year, he is also continuing to raise his profile as a celebrity chef. Natson, who describes his go-to cooking style as “new school soul food,” has shot a pilot for a reality-style television show that has him competing with other high-profile chefs across the country in their own kitchens.

As for his classroom program, he looks to continue broadening Newark students’ palates both inside and outside of the kitchen. “I’m inspiring, invigorating and instilling both home and education empowerment into this next generation of our young people in the City of Newark,” he said.