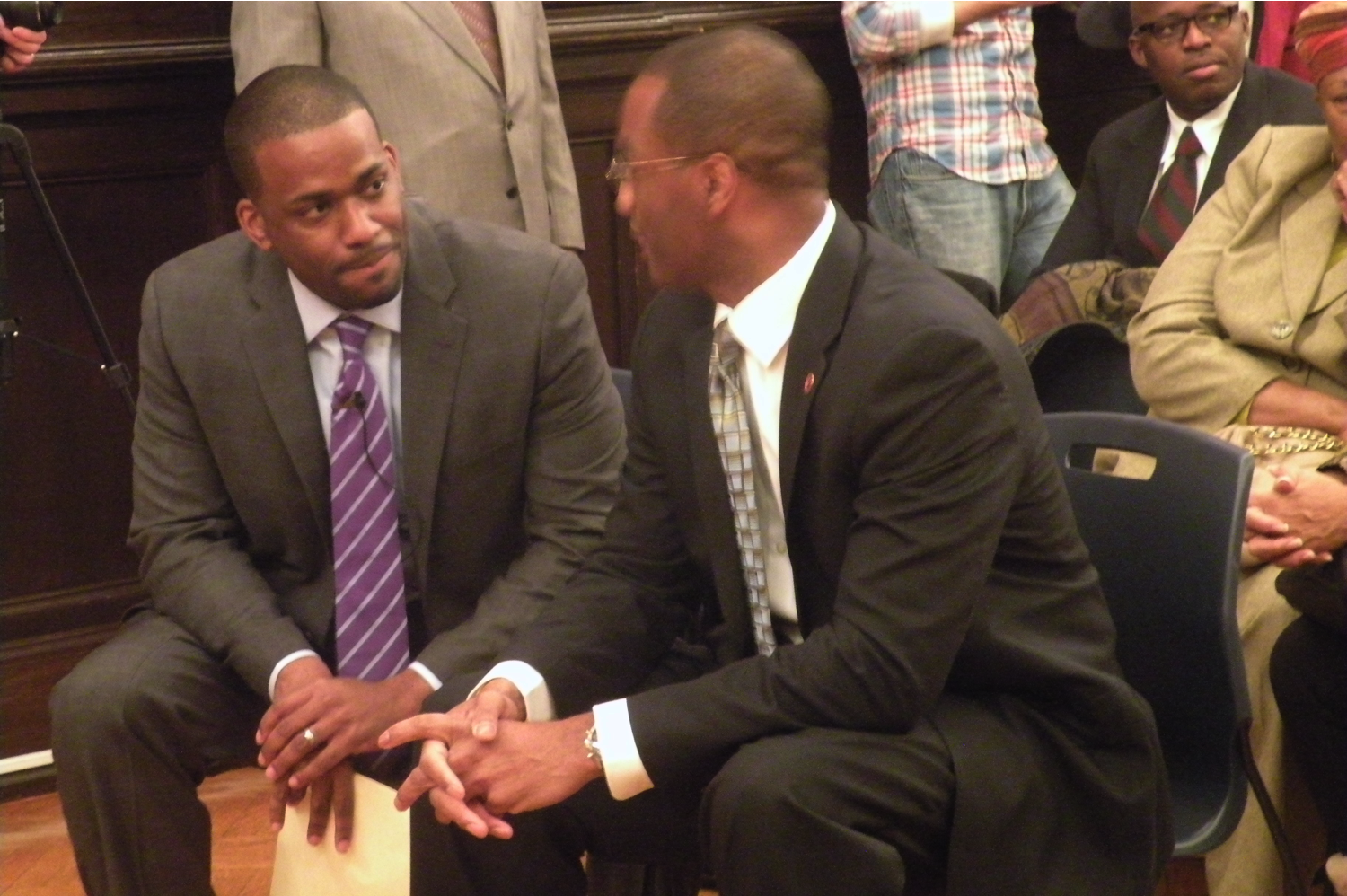 On the second floor of the Newark Public Library last night, three of the four mayoral candidates – Ras Baraka, Shavar Jeffries, and Darrin Sharif – shared their visions for public education in Newark during a candidate forum hosted by the Newark Student Union and NJ Communities United.

The questions and the candidates’ responses were in line with those of the previous mayoral education forum, held at Science Park High School last month. But the students, commanding and irreverent in the face of the candidates and the crowd, proved adept at quashing the types of crowd outbursts that characterized the previous forum, and at keeping the candidates themselves in line.

After opening the forum with a call-and-response chant and a series of sketches about aspects of their experiences as Newark Public School students, they exercised strong governance of the debate early and often.

Shavar Jeffries’ supporters, who showed up en force wearing orange “Team Jeffries” t-shirts over their jackets and sweatshirts, applauded resoundingly when Jeffries wrapped up his response to the first question, where he touted his work suing the state to bring millions of dollars back into the Newark school district. The student moderator immediately reminded the crowd to hold their applause.

Later in the forum, a few crowd members near the back of the room loudly protested as Jeffries aggressively interrogated Baraka’s record as Central High School principal. The student moderator dinged Jeffries for veering off-topic, then directly chastised the crowd for getting out of hand. In contrast to the previous mayoral education forum, they quieted almost immediately.

At one point not long afterwards, the decorum in the crowd threatened to break down again as some of the same voices loudly groaned in response to Jeffries’ comments about violence in the South Ward. A representative from NJ Communities United stopped the debate and firmly chastised the crowd. “The energy that the students brought to this space will not be disrupted,” she said. “The next person to make an outburst will be asked to leave.”

When the forum resumed afterwards, the only sounds that could be heard in the room were Baraka’s voice and a potato chip bag rustling somewhere in the crowd.

For his part, Sharif occasionally played a moderator-like role himself. He twice lightly censured Jeffries for overstuffing his responses with campaign talking points, and took pains to restate the moderator’s questions and attempt to answer them with precision.

On the substance, the candidates again distinguished themselves mostly on the margins.

When asked to respond to school superintendent Cami Anderson “describing Newark Public School students as criminals”, as the questioner put it, in a letter to the parents of Newark Public School students, Jeffries criticized the comment, but also said he hoped Anderson had been taken out of context. Baraka, by contrast, was unequivocal that Anderson meant the comment as it had been received, and questioned why she felt at liberty to make it in the first place.

(In a letter explaining why she decided not to close schools so teachers could attend an education conference this year, Anderson said, “Families lost valuable classroom time and with too many young people idle, crime went up.”)

On a question about local control for Newark Public Schools, Sharif once again argued that creating a cogent agenda for the school system is as important as winning control back. In response, Baraka pushed back on the assumption that Newarkers wouldn’t effectively self-govern the school system.

There was also a reprisal of the debate over Shavar Jeffries’ “genocide” comment, which has been frequently miscast during the election to date. As Jeffries again clarified, he used “genocide” as a metaphor for the effect of low graduation rates for minority students.

But most of these points of differentiation were rehashed from the previous forum. Last night, the helmsmanship of the student moderators made it a little easier to hear those distinctions with a more statesmanlike tone and in a more civil atmosphere.

Shot of the day: Let there be light
4 replies

Working artist’s rag: The good, the not so good, and the sort of outr...