What should our next story be? Tell us what you’re wondering about Newark at brickcitylive.com/curious and we might choose your idea. If you want, you can even help us report!

Gifts East West is one of Newark’s gems. The novelty store is neatly tucked away on the north end of Halsey Street — easily missed during the bustling activities of the day or in the silence that shrouds the area at night.

The store, which is stacked to the ceiling with sculptures and novelty items from Thailand and India, as well as handmade paintings and jewelry by the owners, has called Newark its home for more than 40 years. Ing-On Vibulbhan-Watts and her husband, John Watts, run the store together. Watts, originally from England, moved to the city in 1954. After graduating from Arts High School and, later on, Kean University, Watts taught pottery part time at the Newark Museum for 25 years.

The trajectory of Vibulbhan-Watts differs very much from that of her husband. The artist moved to Newark from Thailand in 1969 and graduated with a degree in chemistry from Rutgers-Newark and a masters in polymer chemistry from NJIT.

“I just didn’t want people to dictate my life and use my knowledge and cause harm for their own commercial purposes,” she said.

“It’s toxic,” said Vibulbhan-Watts about the work she did as a chemist. “When you work for a company and you sell the products you make, sometime it might cause cancer. It’s harmful to the people buying these products and to the chemists producing them.”

In lieu of a lab coat, Vibulbhan-Watts picked up a paintbrush and some clay and anything else she could find to make art and before you know it, she was “hooked.” 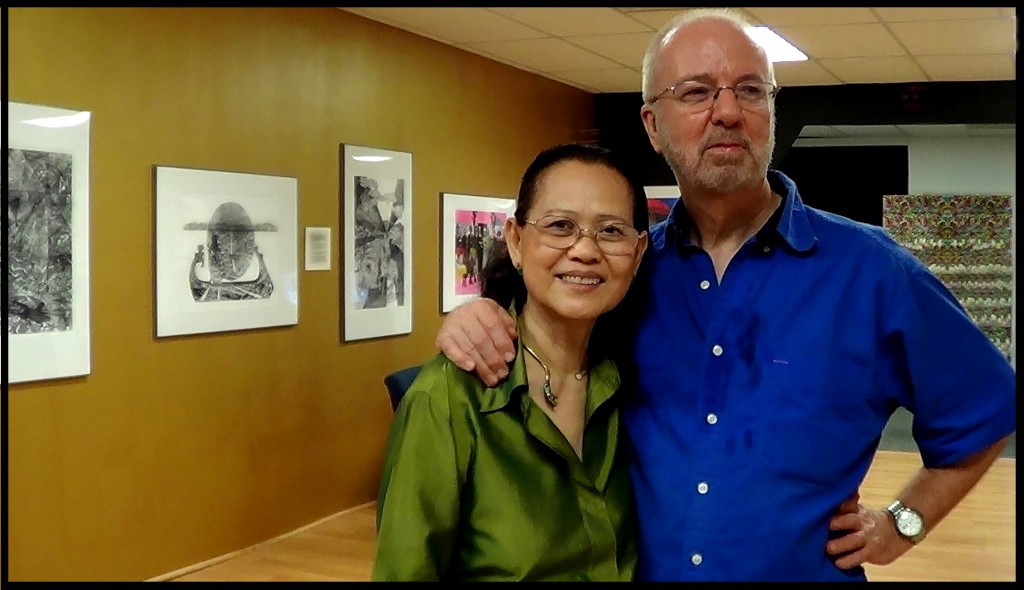 The small store is dimly lit and if you visit it in the evening, the cool light of the sun as it goes down gives the room a haunted effect, bringing the statues and masks that flood the room to life. The room is brimming with art, paintings of the couple’s daughter when she was a teenager, and picturesque paintings of Thailand inspired by Vibulbhan-Watts upbringing.

It’s hard to capture the entire room in one glance. If one tried to they would miss Vibulbhan-Watts’s portraits. One of a dark-haired President Obama is placed to the side of the room, his 2008 inauguration speech weaved into the painting. Another of Martin Luther King Jr. is not too far, his infamous “I Have a Dream” speech written across the portrait of his face. At the front door of the store is a similar text-based portrait, this one of the famous artist Van Gogh. The painting is a distorted image of the artist’s self portrait; the picture is manipulated to give the effect of his face being sucked into itself. The words from the last years of his life line the picture.

“Ing loves to write the words of the people on the painting,” said Watts of his wife. “She read the six hundred Van Gogh letters, letters he wrote to his brother at the end of his life. She read them all and selected two.”

Although they work independently as artists, preferring to balance each other out with their individual work, they’re a typical couple in conversation: finishing each other’s sentences, interjecting with blandishments when the other chooses to describe their achievements modestly. Even the retelling of how they met was a collaborative attempt. Vibulbhan-Watts, who was still a student at the time, had visited the store to find out where she could purchase fabric. Watts, who had owned the store for a year at the time, recommended some locations. bBut it wasn’t until her final year at Rutgers when she lived three doors down from the store that they reconnected for good.

“From my apartment, I heard some banging and I came out and it was him,” she said.

“I was using my kiln, to make pottery,” he elaborated. “She invited me up to the roof and I ran right up, and that was it.”

“I made some food that was so hot and he couldn’t take it. He didn’t tell me ’til ten years later,” she laughed.

At the end of a store is a door that leads to the couple’s home.They’re workspace is a small room brimming with more artwork. Unlike the portraits at the front of the shop, these aren’t for sale.

“People come and see my art and they leave and they have ideas,” said Vibulbhan-Watts. “You know, like when you go to the museum and you see art and you can’t really participate. So I take a picture of the art and make a poster. I call it The Peace Project.”

The Peace Project is an interactive project. The clay pieces that Vibulbhan-Watts doesn’t sell, she photographs and makes a physical poster from in order to take around to schools.

“I ask students to write and tell me what peace means to them.”

Vibulbhan-Watts’ collaborative project has made its way to schools around the city. From high schools to Peace Parades, people color in the blank spaces of Vibulbhan-Watts’ posters with what they think the word “peace” means to them. Some answers are long-winded; others are short and reactionary.

“Can you imagine if people all over the world write their comments about peace and share this with everyone? We might have no more wars,” said Vibulbhan-Watts on her website. By encouraging this open form of communication through art, Vibulbhan-Watts hopes to create dialogue that might ease some of the tensions that lead to violence and other social ills. “If you saw what someone wrote on a poster, and you saw that they expressed some kind of distress – wouldn’t you be able to help them before they did harm to themselves or someone else?”