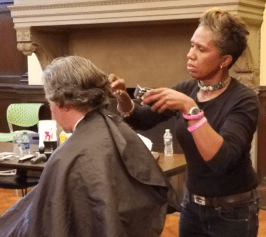 Newark Public Library is inviting people who are affected by homeless to an event meant to connect them with onsite services and longer-term service providers. Shaping Lives 2018: Links to Homelessness Services will take place in Centennial Hall in the main branch of the library’s location at 5 Washington Street on Wednesday, October 10, 2018, 10am-2pm.

Homelessness in Newark has gotten increased visibility in the news of late. The open-again, closed-again saga of a facility at 224 Sussex Avenue has grabbed headlines as its permanent closure has driven some of its residents to take up shelter in a park across the street. The city is currently working on relocation plans for those who have not already been reassigned to housing or found other alternatives, according to a statement by the city’s Department of Health and Community Wellness Director, Dr. Mark Wade. The city also said it is reviewing 10 responses to a recent request for proposals for emergency shelters, where the city will fund housing for people who do not qualify for other assistance.

More than 25 providers of health, nutrition, shelter, and other services will be present at the Shaping Lives event. Participants will also be offered day-of services, including free haircuts, manicures, clothing, toiletries, snacks, and more. Audible will provide free lunches to those in attendance.

Homelessness is an acute problem nationwide, with half of the country’s homeless people located in major cities (and one in five located in New York City and Los Angeles alone), according to the U.S. Department of Housing and Urban Development (HUD). While homelessness had seen a steady year-over-year decline for from 2010 to 2016, it ticked up for the first time nationally in 2017 by nearly one percent. There are also some troubling trends within the ranks of homeless living in the U.S., including a nine percent increase in unsheltered homeless, or people who were not living in emergency shelters, transitional housing programs, or other safe havens.

The library hosted a homeless fair last year, and it “was a great success,” noted library Director Jeffrey Trzeciak, adding that “[t]his time, we hope to reach even more people to ensure they are connected to the essential services these agencies can give them.” In addition to working with Audible to offer meals at the event, the library is also collaborating with co-sponsors Bridges Outreach and the City of Newark.