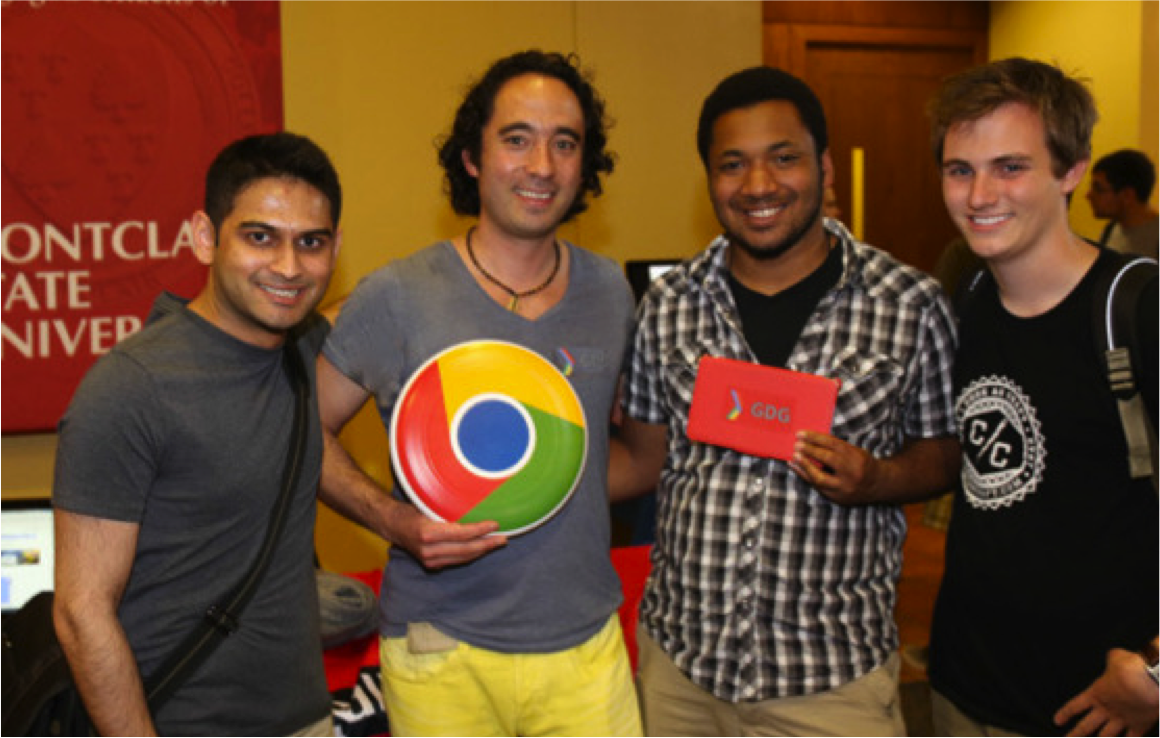 Brick City Makers is a weekly look at people building businesses in Newark at coworking spaces, in incubators, and on their own. Above: Todd Nakamura, second from left, and other participants at GDG North Jersey's Google I/O Extended event at Montclair State University, June 2014. Source: Kickstarter.com

If you ever check out the third-floor walkup space at Seed Gallery where the month-old pop-up coworking space, Converge, has taken up residence on Thursdays, chances are you’ll see Todd Nakamura working and interacting with other entrepreneurs.

Nakamura, 36, graduated from Rutgers in the class of 2000, after studying mechanical engineering. But instead of taking a job in that field, he landed at NovaSoft Information Technology, which trained its employes to become web consultants.

“I just jumped into it,” said Nakamura. “I loved it from the beginning and I haven’t looked back.”

Eventually, Nakamura joined different meetup groups, and met other people with the same passions he had. It was one of those groups that led him to Converge. The Boonton Township native first learned of Converge space through the Brick City Tech Meetup, which was promoting the grand opening of Converge back in May. He cites the “family"-like atmosphere at Converge as one of the many reasons he tries to make regular visits to the area.

“Since the first time I came here, I was just completely sold on it,” said Nakamura. “Every time I come here I meet amazing people who are bringing new ideas, talking about different events, and everyone is really helping each other out.”

Some of those new people have gone on to join Nakamura’s new GDG North Jersey. GDG stands for "Google Developer Group", which is a global Google program which, in the words of Nakamura, “gathers developers who want to push innovation forward,” using Google technology. Responsibilities of a GDG branch include organizing discussions about technology, participating in various Google conferences, and even providing Google with feedback after testing technologies not yet available to the public.

GDG North Jersey is New Jersey’s newest chapter of GDG, and the only active chapter in the state currently listed on Google’s site.  Nakamura founded it on June 5th of this year, after beginning the thorough application process just five days earlier.

“It was a fairly lengthy process,” said Nakamura, “they wanted to make sure you’re really into it and are going to be proactive.”

It’s safe to say Google made the right choice in approving Nakamura’s application, as the group has certainly been “proactive.” Just three days after GDG North Jersey’s creation, Nakamura and his 40 members were already steadfast in bringing a sanctioned Google I/O Extended event to New Jersey. The event was a satellite extension of the Google I/O conference held annually in San Francisco. The I/O conference focuses on displaying advancements in Google’s software and technology.

Nakamura’s persistence eventually paid off, as just two and a half weeks later, he was able to host the Google I/O Extended event at Montclair State University on June 25th. “I was very happy with how it turned out,” said Nakamura, with a look of pride and accomplishment. “The whole community rallied around the event.”

Despite being created just over a month ago, GDG North Jersey now consists of nearly 200 members. Nakamura claims the group has received good traction mostly because “new technology is universally appealing.” That is why anyone can join GDG North Jersey. “Just sign up,” said Nakamura. “We’re inclusive of anybody, and we’re not selective.”

Even in light of the early success of GDG North Jersey, Nakamura doesn’t intend to slow things down. He and 52 of his members have already made plans to attend one of the local stops of Google’s Cloud Platform Developer Roadshow at the so-called "Googleplex", the nickname for the company's offices, located in Manhattan's Chelsea neighborhood. “It’s a chance to not only learn, but also network with the actual Google engineers,” said Nakamura, who also plans to take GDG North Jersey on the road and conduct “mini I/O conferences” in different areas.

One of those conferences might even end up taking place at Converge, where GDG North Jersey is currently trying coordinate a joint event with other meet-up organizations like Brick City Tech and Rutgers Business School's Scarlet Startups meetup. “I just love this place,” said Nakamura. “It’s definitely worthwhile coming to Converge, and if I do host an event, here I would hope to bring 40 to 50 members of GDG.”

In addition to GDG North Jersey, Nakamura is also the founder of NJ Cloud Architects, operates his own site called One Cloud Architects, and is an assistant organizer with Launch NJ. “It’s just all about the community,” said Nakamura about Converge. “The response from them is inspiring, and I draw energy from that, and I hope to give just as much energy back to those people."