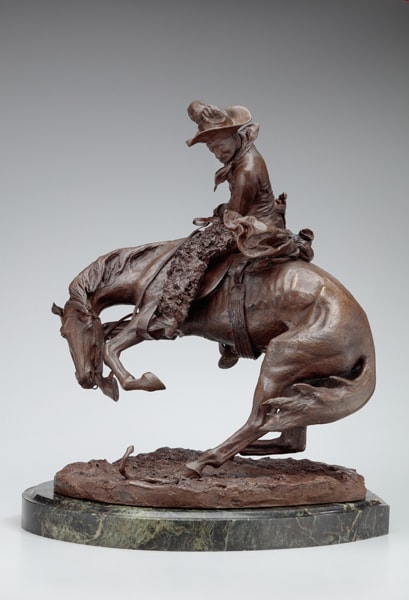 Garibaldi’s 2017 bequest of = bronzes by the sculptor Frederic Remington tripled the Museum’s holdings by this iconic artist of the American West. Since 1952, the Museum has owned Remington’s Trooper of the Plains, cast in 1909 by the Roman Bronze Works of New York. That sculpture was a gift of Mr. and Mrs. William V. Griffin.

The Garibaldi bequest includes a 1906 cast of The Rattlesnake, first modeled by Remington in 1904, and first cast in 1905. The second work is Mountain Man, which was recently featured in the Museum’s exhibition The Rockies and the Alps: Bierstadt, Calame and the Romance of the Mountains. Mountain Man was first modeled by Remington in 1903, and the Museum’s version was cast in 1916, authorized by the artist’s widow.

“Each of these works represents a different aspect of Remington’s skilled use of mass and movement to capture what he considered to be the distinctive characteristics of the frontiersman of the American West,” said Ulysses Dietz, the Museum’s Interim Co-Director and Chief Curator Emeritus.

Roman Bronze works, one of the most significant American bronze foundries of the turn of the 20th century, was established in 1899 by Riccardo Bertelli, a Genoese chemical engineer. Roman Bronze produced many of the most important public sculptures across the United States. The Bertelli family were friends with Charles and Louise Serventi of Weehawken, Garibaldi’s maternal grandparents. It was her grandfather, A. Charles Serventi, who originally collected the Remington sculptures. Garibaldi made this bequest to honor her grandfather’s memory.