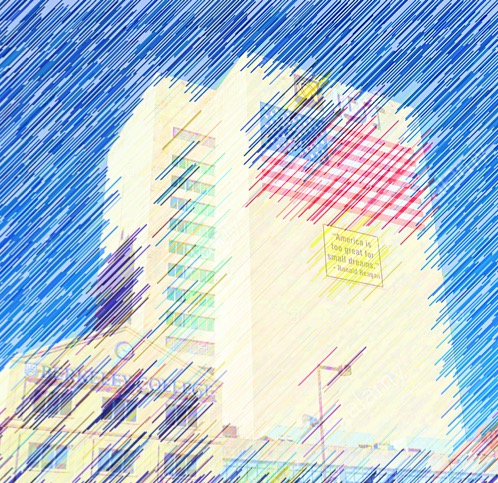 That line was written across a discolored billboard in front of an out-of-business furniture place on Route 22 in Kenilworth late last year. The billboard sits in the empty parking lot, temptingly low and dangerously close to the side of the road. Unless you happen to be stuck in traffic, though, you don’t have much time to deliberate about what to do with it. Eventually the sign is behind you, attacking the next wave of drivers.

Not long before I saw that sign, I noticed a similar message strung across the IDT building in downtown Newark. It’s placed below a gigantic American flag on the McCarter Highway/Route 21 side of the building. In black letters it reads: “America is too great for small dreams. –Ronald Reagan.”

The whole sign combination is not average-sized. The flag takes up the entire width of the building. The quotation is maybe one sixth its size, but it’s still big. It’s displayed with a kind of precise grandeur. I couldn’t help but imagine how it would look if that were a regular office building—a section of windows would be blocked by backwards messages.

I admit that I took a minute to think about the actual line. I wasn’t sure right away if that statement was against what trump says or in favor of it. Is that a confirmation that America is already great, which goes against the chant to go back to a “great” time? Or does the line spout the same nonsense as trump in a different arrangement of words? I was too distracted by the size trying to think it through. It didn’t take too long for me to realize that pro-Reagan is simply pro-trump.

I looked up the quotation online when I got home and saw a memo from the company about the building being newly renovated for a big anniversary. The founder quoted Reagan, finding his message to be relevant to the business story. It’s not as bad as it could be, I guess, but why Reagan? I imagined people traveling from Rutherford or New York or wherever and that being their snapshot of downtown Newark while they drive by. Or worse—people who come to Newark to work in those buildings, knowing the back alley secret before parking in an expensive garage.

Toxic American exceptionalism is not great. It’s toxic. America is a place with wild opportunities, but the speaker of that message can contaminate its meaning. Any combination of the words “America” and “great” need critiquing. This sign deserves it especially because trump’s campaign slogan had been announced just a few months before it was erected.

But even if trump never existed, this Reagan flag, with its black border protecting the words and its glow-in-the-dark yellow background, immortalizes the person who introduced the War on Drugs to America. Let him go. Let that go. Let those people go. All the statues. All the memorials. 3D or otherwise. All the prisons. All the policies. Why are we still looking at their stuff with admiration?

Oddly enough, while that sign flashes thousands of cars a day, the other side of the building faces Broad Street with complete professionalism. Barcade is the storefront. It’s a nice-looking building.

If you continue down 21 for another minute or two, you’ll pass into the intricate murals blessing a long section of train tracks. The first time I saw all the paintings, I was shocked. There are so many individual pieces. You see one you like, then it’s quickly replaced with a new favorite. That happens every time, all the way down to the white dress pattern at the southernmost stretch of the road. Traffic sucks right there, but each red light allows you to see more of it. Even before the murals, that section of 21 has always been a canvas for street art. Now the non-commissioned graffiti on the other side of the highway serves as a balance to the complexity of the murals.

Somehow, these two oversized pieces co-exist in the same city, one right after the other on the same street. Like the city itself, everything changes in just a few blocks. If you’re going in the opposite direction on 21, you experience this phenomena in reverse, stuck instead with Reagan and grey buildings on your mind.

Back on Route 22 a few months later, I was annoyed to see that the furniture sign was still up. I couldn’t believe that no one (including myself) was mad enough to take it down. I didn’t even want to think about how many people had consumed that message during each day that had already passed.

A few weeks ago, I came down Route 22 again, bracing myself for disappointment. But now the letters spell “God Bless Our resident.” These (de)signs don’t just pop up out of nowhere. They’re everywhere.