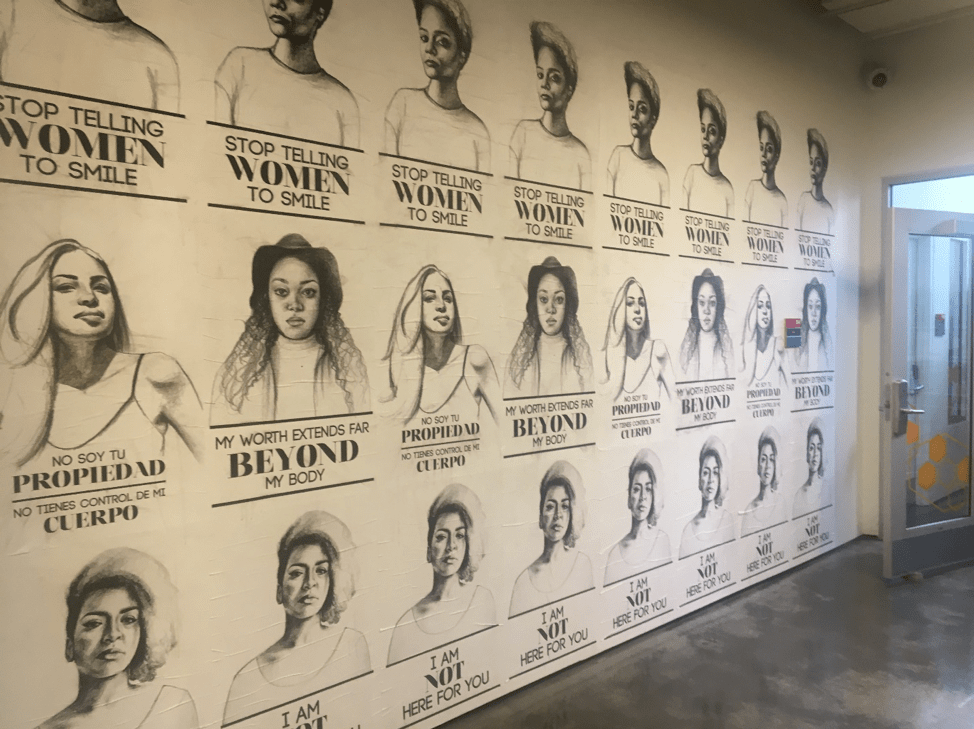 There’s a Stop Telling Women to Smile poster around the corner from my apartment. It says, “Women are People Before They are Bodies.” I see it almost every day, turning onto West Kinney. It’s posted inside an alcove (what used to be window, I guess) on a ran-down building. The building isn’t really even a building anymore either. It’s an L-shaped wall that wraps around the corner. Behind it is mostly garbage and dirt. The only living thing on that strip is a pizza chain store.

The poster is a little downtrodden itself. The first thing I ever noticed about it was that it had been drawn over so that the woman is actually smiling a faded, toothless grin. I remember thinking: damn, that’s rude. You didn’t draw a mustache on her or devil horns. You knew enough about the project to understand the point of the series, so you specifically sketched a smile. That’s almost worse than the penis drawn on her chest.

Red and black words written in graffiti also surround (and outshine) the poster on the same wall. The corner of a word is written right across the poster. That defacement isn’t as direct as the smile. It’s as if the poster was just in the way of a different project, like it wasn’t even there. Somehow, the poster has held up despite its treatment on that desolate block.

Tatyana Fazlalizadeh, the creator of Stop Telling Women to Smile, addressed issues of defacement during her event with Salamishah Tillet at the Paul Robeson Gallery last week. Fazlalizadeh said that she understands that the posters are no longer hers once they’re put up. She added that anything written on them ends up highlighting the need for the piece. The one on West Kinney is a perfect example of that kind of need. It hasn’t been ripped down or completely drawn over; much like Newark’s history, it’s been mostly violated and left behind.

The conversation between Fazlalizadeh and Tillet about the Stop Telling Women to Smile project was framed around Fazlalizadeh’s current exhibition called America is Black. This newer series started in Oklahoma City, her hometown, two weeks after the 2016 presidential election. The project grew from Fazlalizadeh’s interest in the lives of black people who live in a white area. So, whereas street harassment can happen anywhere, the location of America is Black is more specific.

Tillet remarked about carrying a poster-sized picture of the piece behind them, from this newer project, to the first Women’s March in Washington in 2017. In this piece, three faces stare right at you, as if they’re waiting for you to do something. There’s a different kind of anger than in the women’s faces in the other project. Here, the faces are more poised. These figures are also collaged together in unison, so they stand as a group rather than being alone.

Beside their portraits is another unifying structure but in verse. The caption poetically lists out all the things that America is (native, immigrant, trans, etc.), including that this true identity, collectively, “is not going anywhere.” Calling out various marginalized groups ironizes invisibility in a way that doesn’t treat them as also American, but as American. The confrontational style of both projects truly forces people to reckon with themselves.

Throughout this event, Fazlalizadeh made her preference for street art clear. The illegal component matters because it’s about taking control of the narrative. Plus, her pieces were designed to be in public. Putting a poster in a gallery limits the accessibility of it, whereas on the street, people from different angles can engage with it more naturally.

She hopes that people, especially on the street, may identify with the face and message or they may notice their role in the oppression—or both. A woman in her sixties mentioned during the Q&A that the facial expressions themselves on the women were especially relatable. She said, “that’s how you have to look walking down the street!” Because men harass you. It’s real. That’s really the face you have to have. And she’s right. I catch myself looking like that all the time.

Fazlalizadeh’s point about galleries was also accurate. This event drew in mostly artists and/or people associated with Rutgers. The person to my right was drawing some intricate piece with different faces on a tablet when I first arrived. The person to my left asked a question about Fazlalizadeh’s creative process because she’s an artist. The process turned out to be what most people asked about, which makes sense given the demographic. We learned that she: interviews women, takes their picture (while telling the women to imagine you just said that line to a person harassing you), sketches the picture, makes copies, hangs them up with wheat paste, and walks away.

I was drawn to the creative choices made within these repeated images too. I asked about the decision to do portraits vs showing a full body. Especially for a project that resulted from the experience of being stared at and talked at in the street, the missing bodies stand out. I thought maybe it was a dignity move to make it so people didn’t have access to their bodies at all. Fazlalizadeh said that the reason for the portrait designs was simply a matter of space on the page.

And space is important, particularly for geographical matters like street art. That same intersection of West Kinney that is home to the poster is also shared by two luxury apartment buildings. The poster hangs in an impermanent location surrounded by a quickly changing city. This L-shaped wall won’t stay there like that forever. Soon, it will be torn down, no doubt for something fancy. This poster, and the conversation happening right on top of it, will crumble in the dust. But it’s spirit will always haunt that busy corner.

Newark’s Lauren Craig on turning her Wendy Williams moment into a women’s...

Check out this spring block party in Newark
Scroll to top