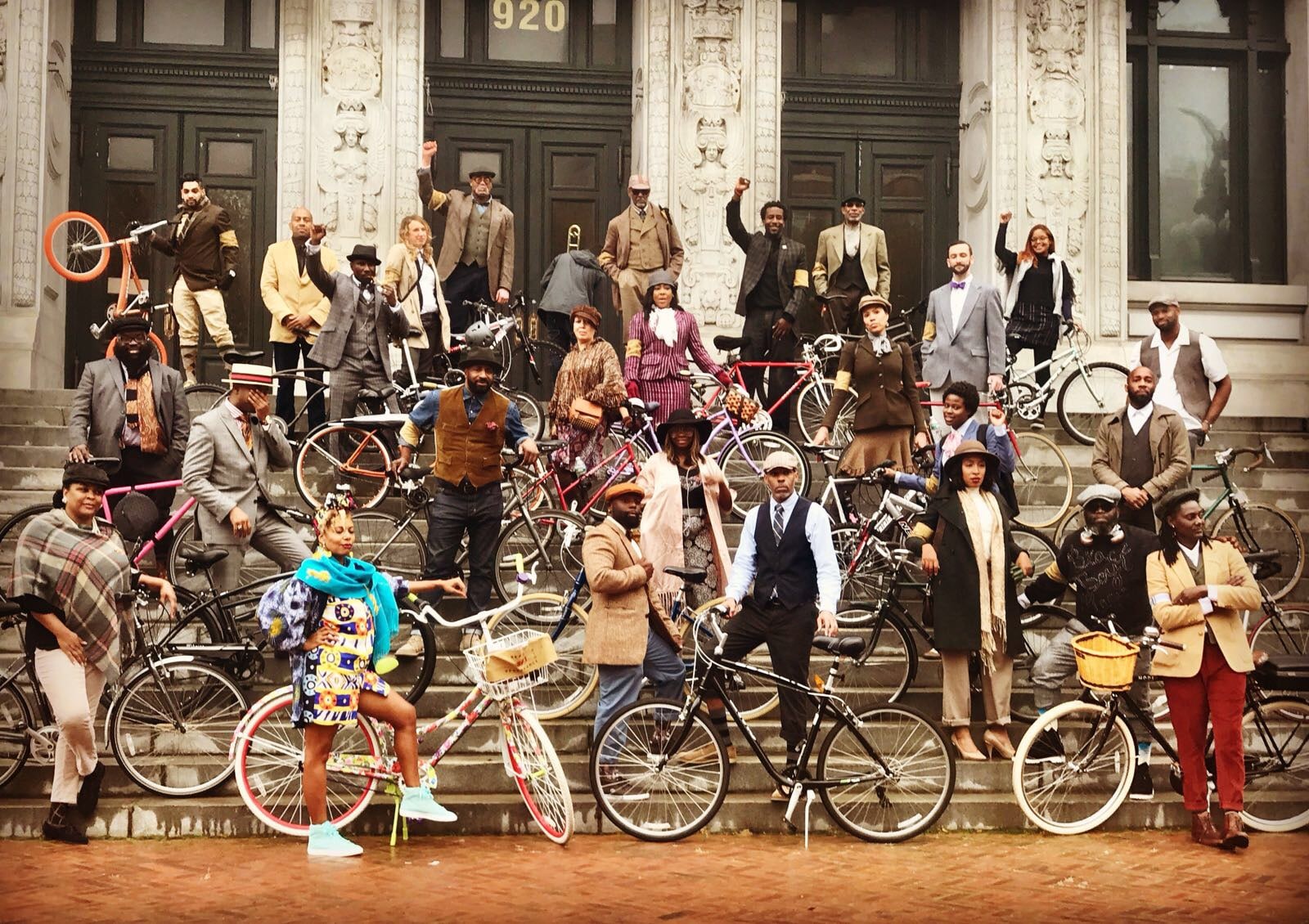 If you happened to be downtown Newark last Sunday, you may have taken in the stunning sight of a group of impeccably dressed bicycle riders taking over the city’s streets.

These were the participants in the first-ever Newark Renaissance Ride. The event borrowed its sartorial spirit from “tweed runs” that have taken place in other cities, but the ride’s co-founder, Paul Chinnery, wants you to know that the ride was really about celebrating Newark’s remarkable culture and history.

A few years ago Paul and his friend Hassan Abdus-Sabur, both bike riding advocates, started talking about the tweed runs that were growing popular in other cities. They eventually decided to adapt and enhance the concept for Newark. They got to work on the event in 2016, and a year later, Newark Renaissance Ride was born.

Paul said they wanted to show that many of the Newark places people pass without a second thought daily actually have important historical relevance. “People don’t realize that these places have deep, impactful value to Newark,” he told me.

To wit, on the corner of Warren Street and Martin Luther King, Jr. Boulevard (formerly High Street), there once stood a stagecoach business owned by Jacob King, who was the richest black man in Newark at the time. The business was an underground railroad stop. Enslaved people would hide in the house, and when stagecoaches departed for upstate New York carrying white passengers, they would stow away underneath. Paul said it was his favorite stop on the tour.

“Now when I ride by, I look at that place and I envision that happening. The ride is a way to make sure that history doesn’t get erased in a file cabinet,” in some nondescript room, he said.

Thirty people was the hoped-for registration total for the first Newark Renaissance Ride. Forty was what they got. And on the drizzly November morning when the ride took place, 25 showed up to participate.

They showed up, and they showed out. Everyone came dressed to the nines, but there were some standouts among the group.

Melvin Sykes came prepared with bottles of Jameson, Grey Goose and la Marca Prosecco packed in a case affixed to the Hugo-Mode bicycle he’d customized the night before. He donned a cap from Dan’s Hats and a Chirp by Bsixtee6 sweatshirt from ANE & Off The Hanger, two independent Newark businesses located downtown.

Clinton McDonald of the Major Taylor bicycle collective came dressed head-to-toe in full rider tweed gear. Lance Smith, who owns Newark’s Little Chapel of Love with his wife, Shinell, was sharp from head to toe, including a pipe, stopwatch and spats. Yolanda Blaize looked like she stepped out of the Tweed Rider edition of Vogue (which doesn’t exist, but if it did, she could have been its cover girl). Filmmaker Nefertite Nguvu’s bicycle was as colorful as her beautiful attire.

Best-in-class. Filmmaker Nefertiti Nguvu, right, won a prize for best bicycle. Yvonne Blaize, center, and Shinell Smith (who co-owns Little Chapel of Love in Newark with her husband), right, were the co-winners for the best-dressed women’s category. Photos by Paul Chinnery

Mission accomplished. Because for Paul, the tweed theme was the “draw,” but at the end of the day, it wasn’t the point.

“Sometimes it takes people to really just feel good and be festive to draw them in. The dress is that draw–everybody wants to look fly,” said Paul. “We did this for the history. But if you just said, ‘Let’s do a history ride,’ nobody would’ve done it.”

Paul and Hassan went out of their way to make sure the historical stops were inclusive, and were mindful about including contributions of black Newarkers of yesteryear among sites on the ride. “We passed things on the tour of substantial historical value that are African-American,” said Paul. “The ride has everyone included,” in terms of the diverse histories represented during the event, “but we want to make sure no one is excluded or erased.”

The riders started on Park Place, near Raymond Boulevard, then rode out to Center Street, outside of NJPAC. The circuitous, five-mile downtown route took riders to Central Avenue, Halsey Street, Newark Museum, James Street, Martin Luther King, Jr. Boulevard and Lincoln Park, with historical facts about dozens of individual sites being delivered along the way.

As they rode, passersby gawked and drivers honked their support.

The City Hall photo of the Newark Renaissance Riders references Art Kane’s famous “A Great Day in Harlem,” which depicts jazz greats on a Harlem stoop. Click or tap to enlarge.

At Newark City Hall, the group stopped for a photo. “[Hassan and I] wanted to do a rendition of ‘A Great Day in Harlem,’” a famous photograph by Art Kane depicting jazz greats on a Harlem stoop in 1958, said Paul. The photo has been recreated countless times around the world, including at least twice in Newark, including one in which Paul himself appears, and another, depicting Jersey rappers, that Paul reported on as a journalist.

Paul, who is a professional photographer (and spent much of the morning racing the head of the group to capture the ride), arranged the shot with a friend, Erik James Montgomery, who suggested the riders include their bikes. The result was an instant classic. Various versions of the photographs were liked and shared thousands of times on social media.

There they mingled as jazz played over Taste Venue’s speakers. Participants collected their swag bags and voted on the best-dressed male and female outfits and best bicycle. And while their dapper attire recalled a bygone time, they mixed in effortlessly with the regular patrons in attendance (Paul himself is a regular at Taste Venue). 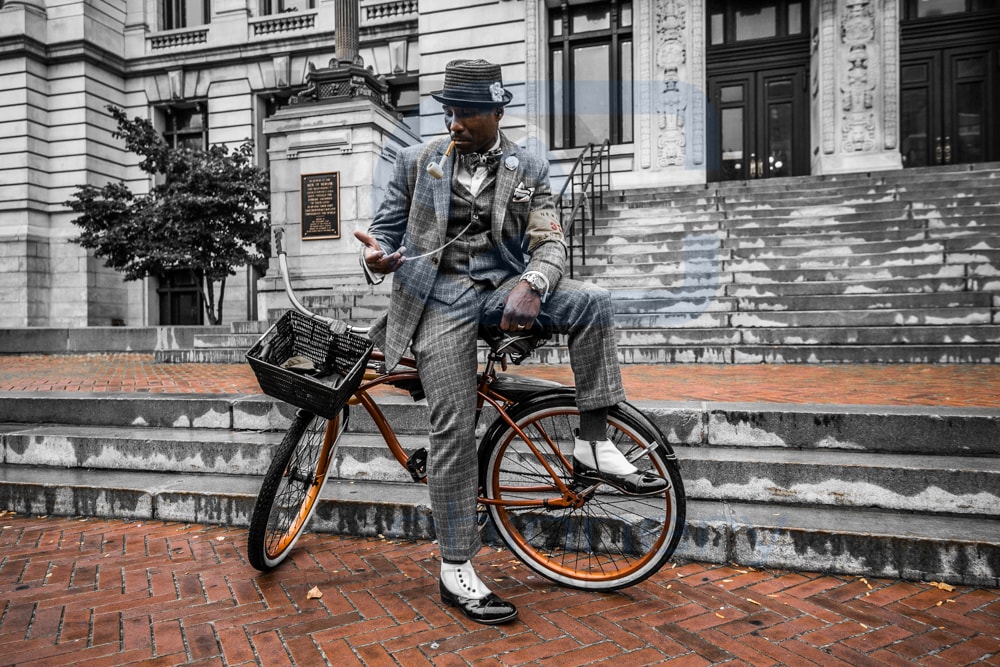 Paul said the help, cash and in-kind sponsorships of others made the ride possible. He credited friends for chipping in, especially Christina Madry, Stacey Gilbert and Hassan’s sisters, Bahiyyah and Rashida, who shouldered a lot of the organizational burden of making sure the ride was successful.

And while no large Newark-based corporation sponsored the ride (something Paul hopes they will consider for subsequent events), independent local businesses chipped in to enhance the experience for participants.

Artisan Collective (25 Halsey Street) donated handmade cufflinks and bracelets for the winners of the best-dressed contest. Peter Blackmer of multimedia archive “Rise Up North: Newark” offered to collaborate on the history for the event. (While Paul was at Artisan Collective talking to the shop’s co-owner, Jae Quinlan, about the ride, Peter just happened to be there. “Jae said, ‘Tell him about the ride!,’” Paul recalled. The collaboration flowered from there.)

Off The Hanger boutique (12 Linden Street) designed and made the numbered brown keepsake armbands that all of the riders wore during the event. Halsey Street newcomer Black Swan Espresso (93 Halsey Street) sponsored pastries, tea and coffee for the pre-ride kickoff mingle at Raymond Boulevard and Park Place. Little Chapel of Love (569 Dr. Martin Luther King, Jr. Boulevard) founders contributed cash and opened up Newark Foundry, the historic house where their business is located, as the halfway rest point for the ride. Newark Print Shop (54 Halsey Street) printed the swag bags and t-shirts. ID Stationary (462 Ridge Street) laid out and printed the programs.

The riders had a police escort the entire way and the requisite permits, thanks to an assist from Amiri Baraka, Jr., Mayor Ras Baraka’s chief-of-staff, and Trevor Phillips, who works for the city.

People are already clamoring for another ride, especially with all the social media attention it received. “It’s definitely going to be an annual thing,” he said, but with the feedback they’ve been getting, he and Hassan are considering an event in spring 2018. The spring compliment to the tweed-themed Newark Renaissance Ride?