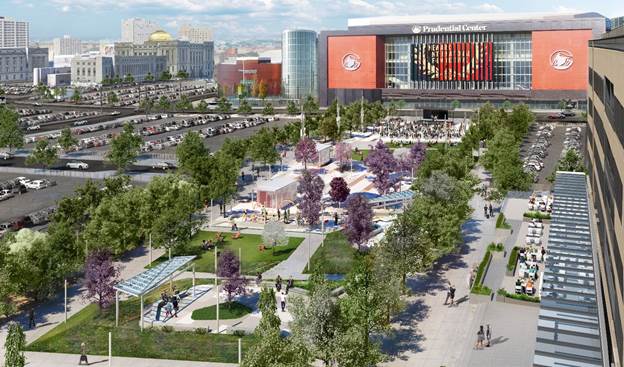 The first phase of a more comprehensive Mulberry Commons project for which new residential buildings are planned, the park will span Prudential Center and Newark Penn Station. It is scheduled to open in September of 2018. [Related: Triangle Park will be called ‘Mulberry Commons.’ What we learned about the transformative project planned for downtown.]

If the current plan and all of its phases are fully realized, the project will eventually stretch up and over Newark Penn Station and hit the edge of the Ironbound.

A statement about Mulberry Commons described it as creating a “new center of gravity” downtown, and touted Mulberry Commons park as a key element of developing areas of the city closest to Newark Penn Station, and creating more continuity on its urban landcape.

One of the most consequential proposed features of the broader project is a bridge that would directly connect the development to train tracks at Newark Penn Station. Modeled on New York City’s High Line, the bridge is estimated to cost about $30 million. 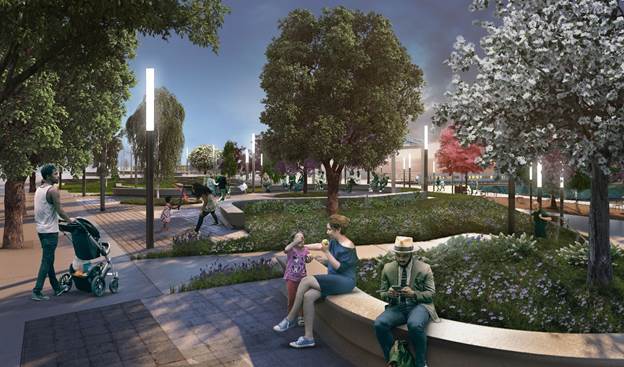 Project principals say full Mulberry Commons development could bring 5,600 jobs to the downtown area, on top of an estimated 5,000 construction jobs. Broader economic benefits are also hoped for, as officials say the project will facilitate a spike in downtown foot traffic and increase accessibility to nearby attractions. Those include Ironside Newark, the 465,000-square-foot mixed-use project at Edison Place and McCarter Highway that is currently undergoing renovation, and Prudential Center, which by the time Mulberry Commons opens next September, will have been home to Grammy Museum Experience for more than a year.

At a community meeting earlier this year, project principals unveiled their plan for Mulberry Commons park, which included community art, kid-friendly features like summer fountains and an ice skating rink in winter (though no playground was planned at the time), an eco-friendly balance of green space and hard surfaces.

Before and After: How murals transformed these Newark streetscapes [interac...

Schedule for Newark Tech Week has been announced
Scroll to top