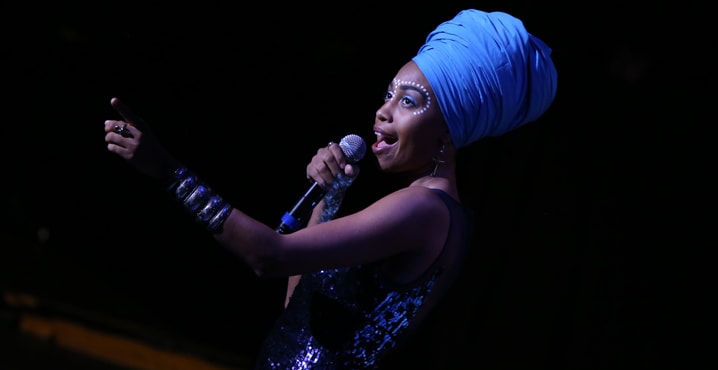 Jazzmeia Horn, winner of the 2013 Sarah Vaughan Competition, makes a return appearance while the judges deliberate. Photo by Anthony Alvarez

“I’m having a ball here, so I’m about to turn this into a juke joint, if you don’t mind,” said New Orleans singer Quiana Lynell, when she took the stage at the sixth annual Sarah Vaughan International Jazz Vocal Competition, held on the final day of the TD James Moody Jazz Festival at NJPAC.

And with a swish of her full red gown’s long skirt, she lit into a bluesy rendition of Irma Thomas’ “Hip Shakin’ Mama,” as the crowd in the packed Victoria Theater cheered, clapped and hollered.

It was the clear audience favorite performance at the competition — and it was hardly a surprise when Lynell was named the contest’s winner shortly thereafter.

The contest, one of the highlights of NJPAC’s annual TD James Moody Jazz Festival, is NJPAC’s celebration of jazz icon and Newark native Sarah Vaughan — who got her own start in a singing competition, taking the stage at the Apollo Theater’s amateur night in 1942. The Arts Center event annually grants one singer a giant step toward a professional career, with a $5,000 prize and a record deal with Concord Music Group.

John Schreiber, NJPAC’s President and CEO, addressed the audience at the competition, recalling his early career working for jazz impresario George Wein, who sent him on tour with Vaughan, among others.

“We won’t see her again,” Schreiber said. “But with a competition like this, we get to introduce the world to the next generation, who will define the future of jazz singing in the 21rst century.”

For the first time this year, the contest was open to male vocalists, and one was among the finalists: Fabio Giacalone, from Italy by way of Brooklyn, who channeled Kurt Elling as he scatted through “Orange Blossoms in Summertime.”

Saluting jazz greats was something of a theme throughout the mid-November festival, which featured  guitar legend John McLaughlin on his farewell tour of the U.S., paired with Widespread Panic’s Jimmy Herring, and NJPAC Jazz Advisor Christian McBride hosting his signature One on One conversations-with-music with Dianne Reeves, whom he introduced as the country’s “greatest living jazz singer.”

And the festival closed out for the year with the biggest of tribute shows: “Ella & Dizzy,” an all-star celebration marking the centennials of Ella Fitzgerald and Dizzy Gillespie.

McBride, backed by his big band, returned to host the event, which packed NJPAC’s Prudential Hall to the rafters.  Linda Moody, widow of the jazz festival’s namesake, made a quick appearance to talk about her husband’s connection to Gillespie — the best man at their wedding.

“We got married on a Monday afternoon, because it was the only time, with their schedules, that they could be in the same part of the world at the same time,” she remembered.

“And now, I get to stand here and play the music of one of my heroes — no  pressure!” joked trumpeter Sean Jones, kicking off the first-act tribute to Gillespie with a take on “Doodlin’” so fierce McBride was moved to fan him with a towel. (“Well … you alright,” a voice from the audience called out to Jones as the thundering applause died down. That got a laugh from the house, but a bow from Jones.)

Trumpeter Randy Brecker offered a take on “Cubano Be, Cubano Bop” that ended with McBride drumming out a rhythm on the body of his bass with his hands. The segment closed out with Jones’ return and a “dueling trumpets” take on “Manteca.”

The starshine got even brighter in the show’s second half, as McBride welcomed soloists to sing Fitzgerald’s signature tunes.

“I’m in seventh heaven, ya’ll. If I float right away, don’t be surprised,” gushed pop singer and songwriter Valerie Simpson, taking the stage to open the segment, belting out “Blues in the Night.” Jazz violinist Regina Carter played the vocal line to Fitzgerald’s beloved “A-Tisket, A-Tasket,” in such giddy fashion that couples in the audience stood to literally dance in the Prudential Hall aisles.

But it’s safe to say that Gregory Porter, cap pulled down almost past his eyes, brought the show to a peak, singing “Somewhere Over the Rainbow,” then dueting with McBride on “Bewitched, Bothered and Bewildered.”

Although there was plenty of sentiment, the show ended, as a birthday party should, on a celebratory note, with Simpson returning for “Get Happy” (“Ella, this is hard!” she shouted at the heavens when she paused for a breath) and the entire cast reuniting for “It Don’t Mean A Thing (If It Ain’t Got That Swing).”

There’s still more to come: Although the festival proper is over for the season, there’s another musical party on the books. On April 28, WBGO-FM co-founder Dorthaan Kirk, known as “Newark’s First Lady of Jazz,” will celebrate her 80th in the Victoria Theater with a concert featuring jazz vocal virtuosos Kurt Elling and Cassandra Wilson, sax giant Jimmy Heath, trombonist Steve Turre and musical director and sax man Don Braden with his band.

Video: Newark Public Library is the place to be in Newark
Scroll to top
X
X