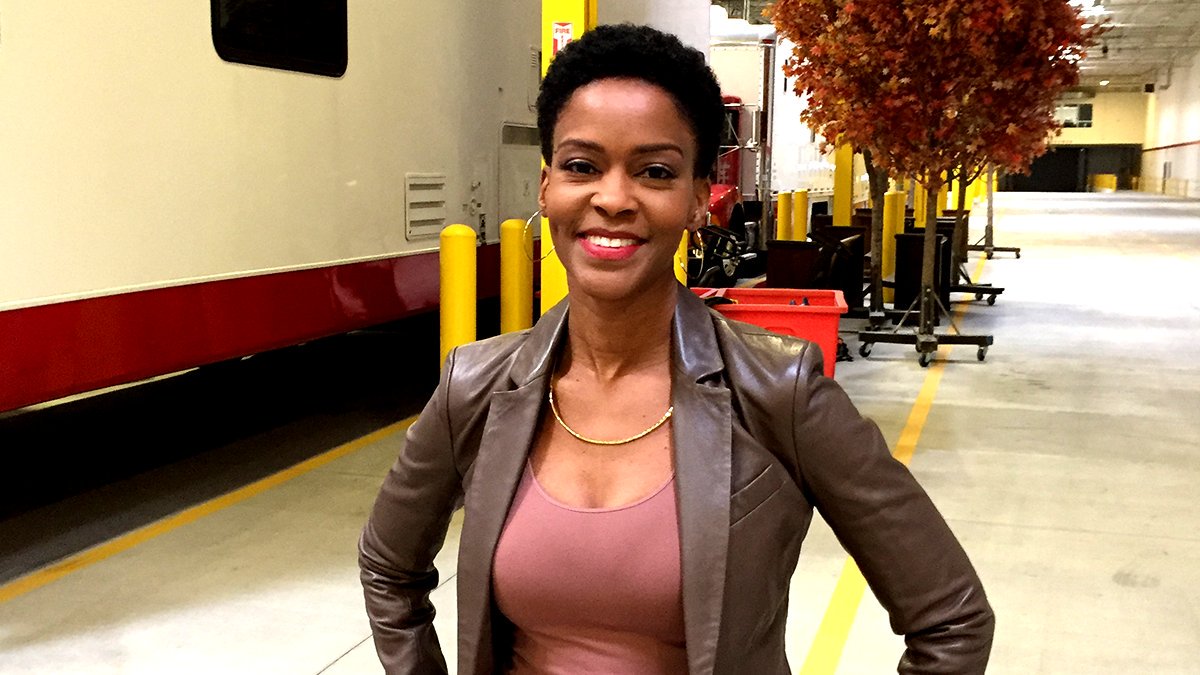 But this weekend in Newark, locals will be able to come face-to-face with the Greenleaf actress, who has returned to her hometown for the second annual Newark International Film Festival.

Hawthorne was raised in Newark’s Weequahic section and cut her teeth in the arts at Newark School of the Arts and at Arts High School. From there, she matriculated at Birmingham-Southern College on scholarship and majored in musical theater and opera.

From Birmingham it was onto Atlanta’s Alliance Theatre, an award-winning theater company. Her acting career them took her to New York, Canada, and L.A., earning dozens of stage, big-screen and television acting roles along the way (U.S. soap opera All My Children, Canadian drama Da Vinci’s Inquest, and feature film The Chronicles of Riddick are among Hawthorne’s many credits). “Next thing I knew,” she said, she’d landed a key role in Greenleaf, playing a self-possessed and “Lady MacBeth-esque” professional and wife who uses every arrow in her quiver to motivate her husband to be as ambitious as she is.

The show draws its drama from the behind-the-pulpit power struggles, rivalries and secrets in a Memphis megachurch. It’s a world Hawthorne said she wasn’t personally attached to in real life, but that preacher’s kids, and even pastors themselves, said echoed elements of some of their experiences. “I’ve met pastors and they’ve said, ‘This is real,'” she told me.

As for the character she plays, Hawthorne said she is a composite of traits in women she has known in her life. While many reviews describe Kerissa Greenleaf as underhanded and manipulative, Hawthorne sees a woman with the ambition to take what she and her family deserve.

“The character is like women that I grew up with, women that I know. Professional, hard working women who have children, who are married, who are running businesses and taking care of their households and wanting to be a part of a successful team,” she said. “And by team, I mean a husband and wife–that they’re going in the same direction together.”

Some relationships consist of “organic” power couples, Hawthorne explained, where both people are on the same track and working at the same level.

Other times, one of the partners needs a little push–or maybe a shove. “My character is definitely the more focused one,” Hawthorne told me. “She’s the one that knows where she’s going. Kerissa can see where they could be.”

Vision is also an important element of Hawthorne’s real life, especially in light of a new venture she’s in the process of unveiling. In addition to her star turn as Kerissa, Hawthorne has been focused since production of the last season of Greenleaf wrapped on launching a line of head wraps. RegalWrap by Kim Hawthorne is a ready-to-wear head wrap brand that features pre-wrapped fabrics women can put on as easily as they would a hat and get on with their days (to stay on top of the brand’s official launch, follow @TheRegalWrap on Instagram, Twitter and Facebook).

“It came out of necessity,” she said, noting that she has two children who keep her on the go. “When you take [your children] to school you can’t be standing in a mirror trying to” perfect your head wrap.

Hawthorne said she often receives compliments about her own wraps, and saw an opportunity to deliver a way for other women to get the look without the gymnastics of perfectly manipulating the material. She also sees an opportunity to bring women of all races into the fold with wrapped looks.

I asked Hawthorne how she would have worked Newark International Film Festival if such an event had been around when she was coming of age in Newark. Her response: she would have been all over it.

“Go to the receptions, go to the panels, go to see as many films as you can,” she advised. “This is like free education.” For people looking to break into the industry, a film festival, and especially an internationally-focused one, is a huge advantage to have in one’s backyard, she said.

Hawthorne also advised having some goals, like meeting a certain number of producers or actors. Being goal-oriented worked for a friend of hers from Detroit whose networking prowess at a film festival earned him an opportunity to produce a film in China.

Hawthorne had only been in Newark for half a day when we spoke, but was already able to remark on some of the changes she’s seen since she was last here (and hoping, she said, that the city can retain the best of its essential character as it evolves). For all of her travels and career milestones, Hawthorne said she’s still a Newark girl at heart.

“Kerissa is ambitious and pulled up, but don’t cross her.”

Greenleaf airs on the Oprah Winfrey Network. Check Oprah.com to find the show on television, and visit Netflix to watch the first season. Hawthorne will appear on the Newark International Film Festival’s “Rising Stars in Hollywood” panel, moderated by Tracey Baker Simmons, on Friday, September 8th at 6 p.m. at Express Newark (54 Halsey Street).