Already an established presence in the Ironbound, Traditional Karate of Newark has opened a brand new location downtown. We sat down with the dojo’s owner and head instructor, Brazil native Jonas Filho, to discuss the benefits of martial arts and why he chose to open a second facility. By offering classes in traditional karate, Brazilian jiu jitsu and women’s kickboxing, the school is aiming to provide martial arts instruction for a wide cross section of people.

M. Brian: How old were you when you started karate, and what made you want to start karate? 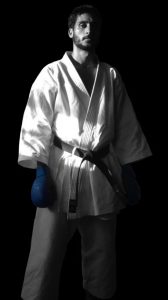 Jonas Filho: I started karate in April of 1999, when I was 14 years old. My main inspiration for wanting to learn karate was Jean Claude Van Damme movies. His movies influenced me a lot, and my dream was to be a fighter. I kept asking my mom for months and years to let me train in martial arts. Finally, she signed me up after someone opened a karate school on the same street I lived on. Ever since then, it has been my passion and I’ve never stopped training.

M. Brian: What was the first school you attended?

Jonas Filho: The first school I went to was Bushido Karate Kyokai (BKK) in Recife, Brazil.

M. Brian: How did karate bring you to the United States?

Jonas Filho: My sister was living here in the United States, and I received an invitation from The United States Of American Karate Federation in Ohio to compete in an international tournament. The tournament was in November of 2006, [and] it was because of this tournament that I obtained my visa and decided to live and train here.

Jonas Filho: At Traditional Karate, we train in the traditional ways and follow the rules of the Japan Karate Association. Our karate is taught the same way it is taught in Japan, [whereas] many schools here in the United States have mixed several martial arts to create their own style, and miss the essence of the original art. With the structure and guidelines of Traditional Karate, your rank and achievements are recognized anywhere you go in the world.

M. Brian: What are some of the benefits for children that take martial arts?

Jonas Filho: I think when signing their children up for martial arts, most parents are interested in their children learning discipline. Traditional Karate teaches discipline, respect, how to overcome challenges and focus. 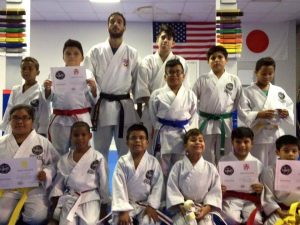 Filho poses with his students.

Additionally, as you may know, the United States has a serious issue with childhood obesity. Traditional Karate instills an active and healthy lifestyle in children at a young age. It also teaches them about persistence, that they will not always be successful the first time they try something, and they must work through that disappointment and keep pushing.

M. Brian: What are some benefits for adults that take martial arts?

For adults, many of the benefits are the same as [for] children. The added benefits are helping with focus, which can carry over into other areas of their life such as professional goals. Of course, self-defense is probably the most obvious benefit; you never know when you may need to defend yourself. Also, it can be a great family activity to do and learn together.

M. Brian: What made you want to open a new location in downtown Newark?

Jonas Filho: I had been looking to open another school in Kearny or Harrison, but over the summer, I was invited to teach martial arts classes in Military Park. I realized that there were no schools in the downtown area, and that Traditional Karate could fill this need and offer a value to the community.