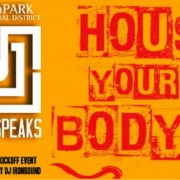 The three-day music festival, which is entering its eleventh year, will be joining forces with Newark Celebration 350, a commemoration of the city’s 350th anniversary, by extending its annual pre-festival series of music and dance-related events to include “Music Speaks,” a series of free lectures and a multimedia arts events “designed to increase Newark citizens’ appreciation for the African American musical genres of gospel, hip-hop, blues, jazz, rhythm and blues, rock and roll and house as well as empower and inform,” according to a recent email from festival organizers.

Tuesday’s free 21-and-over event, which will take place from 6:30 p.m. to 9:30 p.m., will commemorate house music, and will feature sets by DJ Ironbound. . Those interested in attending are encouraged to RSVP at musicspeakskickoff.splashthat.com.

The Lincoln Park Music Festival itself will take place this summer from July 29th through July 31st. 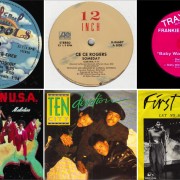 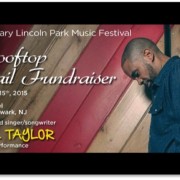 Festival season is here and this summer marks a decade of celebrating the musical culture of Newark at the Lincoln Park Musical Festival. The 10th anniversary of the event will be held later this July and feature entertainers performing hip-hop, house, jazz and gospel, and a wide range of activities.

The festivities will kick off early with the “2nd Annual Rooftop Cocktail Fundraiser” on July 15, hosted by acclaimed singer/songwriter Russell Taylor. The fundraiser will feature a performance by Taylor and fellow singer Peter Winstead Jr.

Cocktail appetizers, provided by Commerce Downtown kitchen, and specialty cocktails by Fedway will be served.

Rooftop space is limited, and there is a finite number of walk up tickets available at the venue. Tickets are $45 and you can buy them online here.

The cocktail party will run from 6 p.m. to 10 p.m. at the Rooftop Lounge at the Robert Treat Hotel, located at 50 Park Pl. in Newark.

Remember to save the dates for the Lincoln Park Music Festival, hosted by the Lincoln Park Coast Cultural District and the Newark Community Economic Development Corporation, which will run from July 24 through July 26. 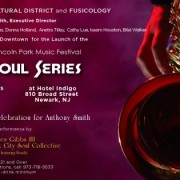 The Lincoln Park Coast Cultural District (LPCCD) has announced the kickoff of its Jazzy Soul Series at SkyLab. The live music events will take place every Tuesday leading up to the Lincoln Park Music festival, which itself takes place July 24th through the 26th.

The first concert in the series is this coming Tuesday, July 7th from 5:30 p.m. to 9 p.m. at the rooftop lounge, located at Hotel Indigo. Tuesday’s event will feature performances by James Gibbs III and the Brick City Soul Collective, featuring Hendii. 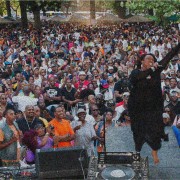 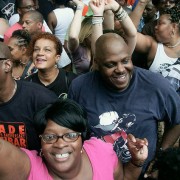 One of Newark’s most highly anticipated summer events is celebrating a significant milestone this year: the Lincoln Park Music Festival, scheduled for July 24th through July 26th,  will be celebrating its 10th anniversary.

In past years, the festival has featured Grammy award-winning acts and an array of local talents that range from jazz to gospel, house to hip-hop. According to organizers, the festival, a tentpole initiative among the several spearheaded by the Lincoln Park Coast Cultural District, grew from 2,000 attendees its inaugural year to more than 50,000 last year.

To commemorate its decennial, festival organizers are expanding the event’s footprint by holding events around the city in the runup to the official festival dates. Beginning next week and running even after the festival wraps, Newark residents and visitors can look forward to events at venues including Burger Walla, Center Stage Cuts, Hotel Indigo, and Robert Treat.

“I applaud the Lincoln Park Coast Cultural District on celebrating this 10th year milestone of providing great music and fun for families and visitors alike,” said Newark Mayor Ras Baraka. “This musical experience is near and dear to me as my father, Amiri Baraka, participated in past festivals and treasured this event. The Lincoln Park Music Festival is a true mainstay for this great city,” Baraka continued.

LPCCD is calling this time of year #FestivalSeason, and is also encouraging use of hashtag #LPMF10 to mark pre-festival events leading up to the three-day festival itself. Read below for scheduled pre-festival events, and stay tuned for more event details and the festival lineup as they become available.

Come grab dinner, drinks and enjoy a cabaret-style intimate performance by a jazz, R&B or neo-soul artist at ALVA at Hotel Indigo. Admission is by dinner reservation at ALVA or two-drink minimum for standing room only. Call for reservations 973-242-0065. Must be 21 years old or over to attend.

Enjoy a warm rooftop breeze, cocktails, appetizers, and live DJ with a view overlooking NJPAC’s Sounds of the City concert. The event will be hosted by singer/songwriter Russell Taylor, a VH1 “You Oughta Know” 2013 winner, who will treat the attendees to a special live performance. Also appearing Newark’s own alternative R&B vocalist, songwriter, Peter Winstead, Jr., who has been touted by BET, DJ Booth, AllHipHop.com, AOL Black Voices, and Centric. There is a nominal admission price of $45 for this amazing night of music that will raise money for the Lincoln Park Coast Cultural District, a 501(c)(3) nonprofit organization. Tickets go on sale June 26, 2015. Call for information 973-242-4144. Must be 21 years old or over to attend.
—