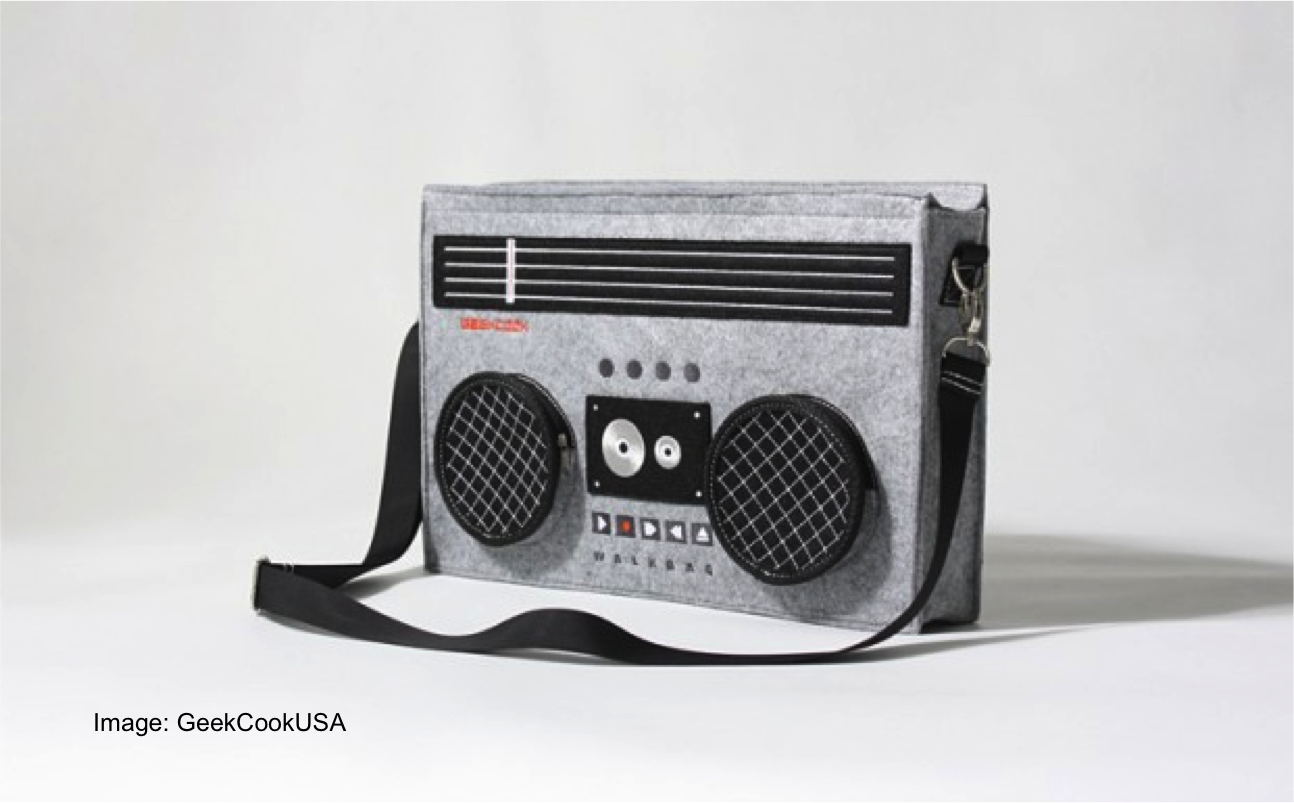 In addition to being one of the two organizers of Newark’s BrickCity Tech meetup, Jimi Olaghere is the founder of GeekCookUSA, an independent accessories brand that creates unique products which cater to pop culture and technology enthusiasts. Jimi talks about his businesses, how it came to be, and why he came to Newark.

We try to make everyday items, but make them in a unique way that stands out. We make things for people who like design, and like things that are made well. We also use eco-friendly materials. With plastics, you have to mold and cast products. With wood, all we have to do is literally just cut it, so there’s nothing emitted into the environment. Our bags are made of felt, which is also more eco-friendly.

What is your relationship with Geek Cook?

One night I was thinking, “I’m tired of web design. I want to do something different and run a business.” I decided to launch GeekCook in the US, and I paid to license the name for US use for the first year. I bought stuff from factory and started designing things for the US market.

I eventually segued from GeekCook to GeekCookUSA, which means I don’t need to pay to license the name anymore. I’ve had a number of interns work with me, but I’ve never had more than three people helping me at once.

What’s your design process with the team in China?

There are some things I’ve designed by myself, and others with the designers, who are all based there. They design from idea to first concept, and then we start building on the concept from there, until we nail down the product.

China has a stigma of doing things fast and cheap, but there’s a design community in China that’s into well-designed, well-made things.

For GeekCookUSA, we always have to consider what an American design lover would like, because items don’t always translate from one culture to the other. GeekCookUSA does clocks with the Vetrivuan Man in the middle. Something like that would not appeal to a Chinese consumer.

And certain things don’t work in the US. Chinese characters don’t really work here anymore. Certain designs look too traditionally Chinese to have appeal for our target: our American audience isn’t going to buy items with emperors and geishas on them.

I’ve found that people love bags in America — we sell them like crazy. In China, they sell way more clocks.

How did you get your retail operation stood up?

Initially I was just selling face to face; I didn’t have a web presence in the beginning. I registered the LLC when I got everything going, and then I got a warehouse “down neck” [in the Ironbound] to store the manufactured products from China.

With our supply chain, there’s a definitely formula. We design really fast — you could call it lean manufacturing. I trust my designers, so we don’t send samples back and forth from the US to China. I trust the quality of the manufactures who make the products. So once I’ve seen the design develop online and get to a final product, I order at least my minimum quantity – which is 300 items – and have the products shipped to the States.

I used to waste a lot of money doing air freight — you can actually lose money. So now I do sea freight, which takes 2 months. It’s a process – there are three steps of letting your package go through customs because it comes from China – but it’s still worth the  savings. I personally go down to the port to pick up the items and help load them on to our truck, then we take them to our warehouse.

We’re actually approaching our busy season, since Christmastime is coming up. We’ll need to start finalizing things so we can have them shipped over in time for the holidays.

Where do you sell GeekCookUSA products?

I reached out to a lot of the online retailers: Fab.com, Jack Threads, Gilt, Uncommon Goods, Fancy.com, Square Marketplace.

You usually need an intro to work with the bigger retailers. I met the Gilt people at an event: I just went,  met the GM face-to-face, and gave him my email address. He linked me right to Gilt’s buyer.

I also sell directly. It’s currently a pretty small channel, but it feels so gratifying to go straight to the buyer. I want to start expanding the retail aspect of business because it gives me more control. With some of these relationships, I have to have exclusive deals where if I’m selling an item through one retailer, they’re the only one that can carry it. Other times, I have to give up some control on pricing.

Are you glad you chose the partnership route to start?

I think it’s the only way to do it. I didn’t have investors, and didn’t have boatload of cash, so this was the way to get started. You find partners that already have the audience. It’s especially important for someone that’s selling a business with tangible goods. You sell and get money coming in – it kind of validates the idea. So eventually I can start selling direct-to-consumer.

And now the money question. Why Newark?
I used to live in Central Jersey. I met my then-girlfriend [now-wife] and moved up to Essex county to be closer to her parents, and I fell in love with Newark.

I really wanted to get involved with tech scene. When I was living in Belleville, I went to the NJ Tech Meetup. I thought it was cool, but it had so many people, you couldn’t really feel connected to the scene. When I moved to Newark, I said to myself, “There’s gotta be something like this here.” I saw the meetup at Audible, went to it, saw Anthony [Frasier, founder of the BrickCity Tech Meetup] and said “I know this guy”.*

How would you pitch Newark?

Newark in itself is appealing because this is where I can foster a lot of the things I want to do. The mentality for me right now is that you can get in on the ground floor. If you go to the city [New York], you’re going to be saturated by so many people. Newark is the place right now where you can stand out. You can grow with Newark. Newark is a great place to invest in yourself.

Darrin Sharif makes his pitch to be mayor of Newark